Our managing editor recaps the top stories of the year. 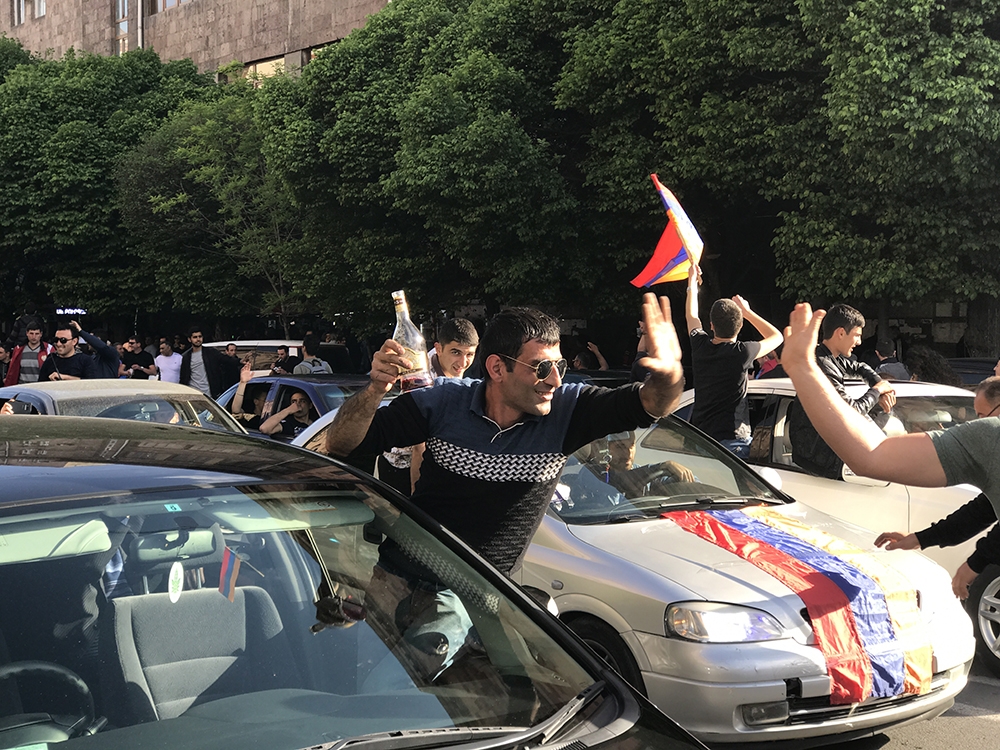 Revelers took to the streets of Yerevan after Armenian Prime Minister Serzh Sargsyan stepped down on April 23. (Joshua Kucera)

The most obvious change hit Armenia. In March, long-time leader Serzh Sargsyan tried to extend his rule indefinitely by sliding from the presidency into a newly empowered premiership. A member of parliament’s tiny liberal opposition, Nikol Pashinyan, began street protests that, against all expectations, quickly snowballed and made him prime minister. By the end of the year, Pashinyan had won a landslide parliamentary election, granting him a mandate and a supportive legislature. Russia appears chagrined by the rapid changes, but thus far is taking a mostly passive approach.

The change in leadership and style raised hopes, for the first time in recent memory, of a breakthrough in negotiations with neighboring Azerbaijan, three decades after the conflict over Nagorno-Karabakh began.

Our Caucasus editor Joshua Kucera reported a perceptive series from both sides of the frontline. He visited Kelbajar, a town occupied by ethnic Armenians on land internationally recognized as Azerbaijan’s. There he met the Armenian settlers who are putting down roots. Later he traveled to Azerbaijan and visited people displaced from Kelbajar, who are raising a generation that has never seen home.

Echoes of war reached the far other side of our region, too, with an ISIS-inspired attack in Tajikistan. In July, a carload of young men purposely plowed into a group of foreign cyclists, killing four – shortly after pledging allegiance to the Islamic State group. Most of the suspects were quickly rounded up and shot, but the alleged ringleader was sentenced to life after a closed trial. Dushanbe endeavored to tie the attack to the exiled opposition, a tired tactic that fools no one. As authorities fail to offer young men decent opportunities or political outlets, the causes of militancy are going unaddressed.

Politics in our region’s other poorest country, Kyrgyzstan, were dominated by stories of corruption and incompetence. Talk of jailing the cantankerous ex-president overshadowed the final months of the legislative season. And not one but two of his prime ministers were arrested on charges of misusing funds earmarked to modernize the capital’s aged heating-and-electricity plant, which failed during a severe cold snap last winter. While Bishkek’s chattering classes pointed fingers, impoverished villagers on Lake Issyk-Kul reeled from the realization that they had fallen for a Ponzi scheme run out of Kazakhstan. As if that weren’t bad enough, work stopped on a road linking their region with the outside world amid more allegations of shady dealing in Bishkek.

Next door, reforms in Uzbekistan continued. A year after taking power, Shavkat Mirziyoyev pushed out Rustam Inoyatov, the shadowy long-time head of Uzbekistan’s brutal security services. Border controls were loosened and foreign investors, most notably from Russia, flocked into the country. When Vladimir Putin visited in October, his entourage numbered 1,200. More conspicuously, he one-upped China, signing $27 billion in commercial contracts.

Tashkent also loosened restrictions on media, making it possible to report openly – even from the unlikely spectacle of a midnight rave on the former Aral seabed. But does all this make an “Uzbek Spring,” as so many commentators have been eager to declare? Or is Mirziyoyev fashioning a system more like the one in neighboring Kazakhstan, a kind of “smart authoritarianism”?

In Turkmenistan, the region’s most tyrannical and closed country, the currency crisis deepened. Breadlines became normal, as did travel restrictions. In May, we launched a weekly bulletin on Turkmenistan, parsing and contextualizing sundry reports about the closed nation and its president, Gurbanguly Berdymukhamedov, who continuously raises the bar for madcap-dictator stunts.

We have many exciting projects in store for 2019! Meanwhile, catch up with us on Twitter, Facebook and YouTube, and subscribe to our weekly newsletter for the latest news and analysis from Central Asia and the Caucasus.