Catch up on the biggest events we covered this year. 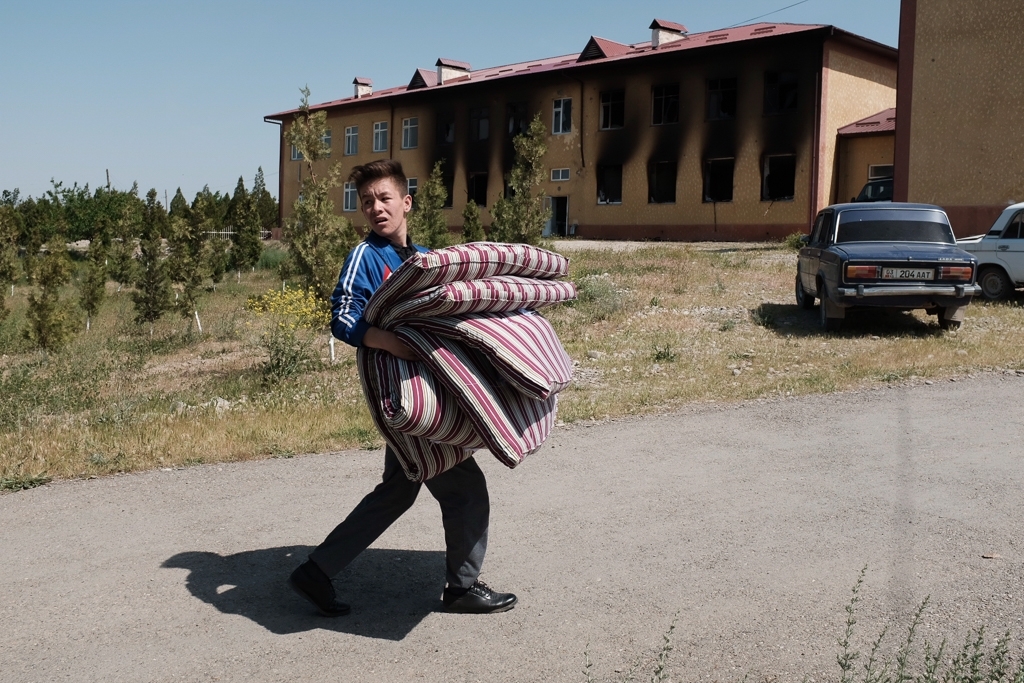 A man carries humanitarian aid outside a burned school in southern Kyrgyzstan after border violence with neighboring Tajikistan in the spring. (photo by Danil Usmanov)

Like the rest of the world, Central Asia and the Caucasus were battered in 2021 by the pandemic and the economic havoc it has wrought, but the year also saw some other developments likely to shape the regions for years to come.

Despite flareups, the ceasefire between Armenia and Azerbaijan largely held. Azerbaijan pressed its advantage as it seeks a transit corridor to its Nakhchivan exclave and Turkey, closing a major Armenian highway along short stretches that now cross Azerbaijani-controlled territory. In recent weeks there have been hints that negotiations over these messy transport routes, which could benefit all parties to the conflict, are making progress.

The crushing defeat in the war with Azerbaijan roiled Armenia's government, with opposition parties condemning attempts at negotiation as amounting to treason. Prime Minister Nikol Pashinyan and his party did better than expected in a June general election, but he no longer enjoys the mandate he had after coming to power in the 2018 "Velvet Revolution." Pashinyan is trying to normalize relations with Turkey, despite widespread wariness at home.

To the north, Georgia continued to erode hard-won democratic credentials. In February, the ruling Georgian Dream party arrested a top opposition leader. After months of EU-sponsored talks, the government ditched a deal with opposition parties, ensuring an especially tense election cycle in the fall. Georgian Dream dominated the vote, which the opposition called “totally rigged.”

By then, however, the opposition’s case had been overshadowed by its would-be leader, former president Mikheil Saakashvili, who returned from exile only to be promptly arrested. When he appeared in court after a 50-day hunger strike to face abuse-of-office charges, Saakashvili showed he had no intention of ceding the spotlight to a younger generation of opposition leaders.

Western exasperation with Georgia’s illiberal turn peaked in July after the government pandered to a violent homophobic mob that attacked dozens of journalists; one was killed.

But on one major issue, Georgian Dream showed itself vulnerable to public pressure. In May, the charismatic son of a village priest led a sit-in against an opaque, $800 million Turkish hydropower project in western Georgia. When Tbilisi then sought better terms, the Turkish investor pulled out.

In Central Asia, where water plays a major role not just in local politics but in interstate relations, 2021 was pivotal in at least two ways.

First, turn to the undelimited borders of the Fergana Valley, where soldiers and villagers from Kyrgyzstan and Tajikistan came to blows in late April over access to a critical sluice in territory both sides claim as their own. Dozens were killed in the worst interstate violence to date, which wrought destruction far from the original source of the conflict along a border that has seen increasing clashes in recent years. Until both sides agree on mechanisms to share water, fresh spasms of bloodletting appear inevitable.

Then, by summer, the worst drought in over a decade fueled region-wide crop failures and food-price inflation; by fall, low water levels in reservoirs meant energy shortages. Kyrgyzstan negotiated some power swaps with neighboring Kazakhstan and Uzbekistan but later said the days of sharing water from its giant Toktogul reservoir may be over.

Energy-rich Kazakhstan also faced a power crunch in the autumn shortly after an 8 percent spike in demand for electricity, which officials attributed to the cryptominers who appeared this summer when China banned their energy-hungry computer process.

China was often on the minds of Kazakh security officials who hounded protestors demanding freedom for relatives stuck in the Xinjiang gulag.

Uzbekistan ignored its promised reforms: jailing a blogger, secretly adopting a new religion law, and holding a competition-free presidential election. Even as evidence dripped out that COVID-19 is ravaging Turkmenistan, President Gurbanguly Berdymukhamedov continued to insist his country is virus-free while preparing his son to succeed him.

Kyrgyzstan held parliamentary elections in November, a year after President Sadyr Japarov seized power. Parties loyal to the populist took control after some fishy business during the count. When a longtime opposition leader called for protests, he was promptly assaulted on the street. Japarov now controls all levers of power. But that may not help an economy gripped both by the inflation ravaging the region and by investor hesitation after Japarov in May nationalized the Canadian-run Kumtor goldmine, source of 10 percent of GDP.

For 20 years, the Central Asian states prepared for the Islamic Republic of Afghanistan to fall. Yet as the American-backed government rapidly lost territory throughout the summer, Central Asia appeared spooked, slamming the door on refugees and fortifying borders with Russian military support. But within weeks of the Taliban taking Kabul, most Central Asian leaders sounded cautiously optimistic. Uzbekistan quickly positioned itself as a hub for Afghan-bound humanitarian aid and investment; Turkmenistan saw a chance to press on with decades-old dreams of energy corridors to South Asia. Kyrgyzstan and Kazakhstan sent delegations to Kabul. Only Tajikistan refused to speak with the Taliban, even allowing some Afghan opposition figures to base themselves in the country, much as it did the last time the group controlled Afghanistan in the late 1990s.