A brief history of corruption in Ukraine: the Yushchenko era

The Orange Revolution fades to black. Part 3 in a series. 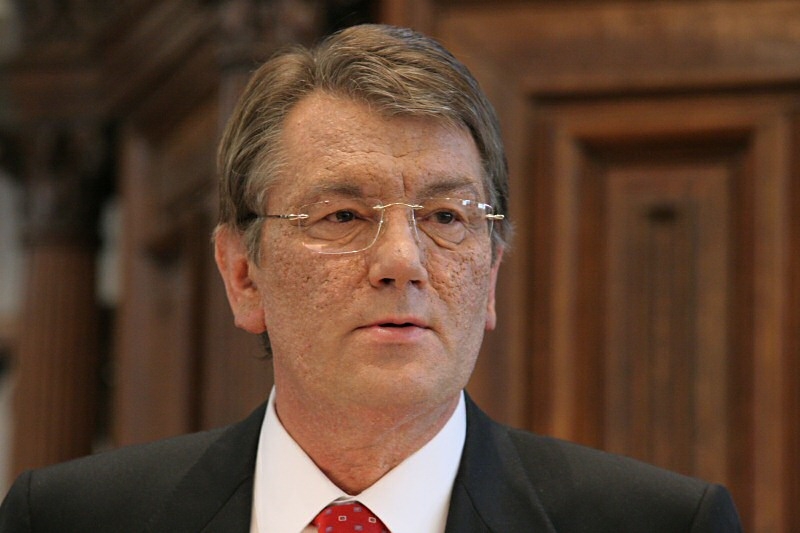 Also in this series:
The Zelensky era
The Poroshenko era
The Yanukovych era
The Kuchma era
The Kravchuk era

The silhouette of the man onstage at Maidan Nezalezhnosti was that of Viktor Yushchenko, the leading contender in Ukraine’s upcoming presidential election. The voice was his. The team around him, too.

But his face wasn’t instantly recognizable.

It was September 18, 2004, and the vote was two months away. Yushchenko was about to give his first speech to a crowd of supporters in Kyiv’s central square after a brush with death earlier in the month. A sudden and severe illness had left his once-handsome face discolored with large abscesses and ugly boils. Subsequent tests determined Yushchenko had been poisoned by dioxin, a highly toxic chemical.

As he gave his speech Yushchenko was still visibly ill, wiping his brow frequently. Even standing seemed like it demanded superhuman effort. Defiantly, he spoke about his vision for Ukraine; how the wealth of the nation would be taken back from “the pocket of clans” and returned to the people; how the plundering of the state would end; and how the treasury would receive a fair price for state-owned assets.

And then he said something that would become a refrain by which his presidential campaign would be remembered: “Bandits will go to jail!”

He was referring to the system created by outgoing President Leonid Kuchma, in which hand-picked individuals got rich by acquiring state property – a process that had turned Ukraine into an oligarchy.

It was a galvanizing moment for his campaign, encapsulating Ukrainians’ pent-up hopes that after a decade of dysfunction and missed opportunities, the country’s economy would get on the right track. Many Ukrainians started to view Yushchenko as Ukraine’s savior.

Those hopes eventually enabled Yushchenko to gain the presidency. Unfortunately, he, like his predecessors, proved unable to fulfill high expectations. His tenure as chief executive is now mostly remembered for its ineffectiveness in turning Ukraine around. Many of his friends would become the plunderers he so despised during the campaign. And after a single term in office, he would be humiliated at the ballot box and sent packing.

Orange happened to be Yushchenko’s campaign color. And it came to be associated with the momentous events that brought him to power.

The official tally diverged dramatically from a national exit poll conducted by a consortium of reputable pollsters, which indicated that Yushchenko had won by an 11-percent margin. The CEC’s decision handed the victory to Yanukovych, saying he had won with a margin of 2.7 percent. International observation missions chimed in, calling the election rigged in multiple ways: biased media coverage, misuse of state resources, pressure on vulnerable social groups to support Yanukovych, intimidation at polling stations.

The result was no surprise to Ukrainians.

Yanukovych was President Kuchma’s hand-picked heir. Kuchma had appointed Yanukovych prime minister in 2002, effectively handing him the state apparatus and budget to play with during the campaign.

But Ukrainians refused to accept the election results. Protests began even before the official results were announced. Some 200,000 were out in Kyiv’s streets by nightfall on November 24, many wrapped in orange scarves and flags to signify their support for Yushchenko. Mass protests and other acts of civil disobedience continued for weeks. A youth activist organization, Pora! (“It’s time”) played an outsized role in catalyzing the protest movement, which came to be known as the Orange Revolution.

By early December, Ukraine’s parliament expressed no-confidence in Kuchma’s government. The president was left with a difficult choice – to unleash force against the mass of protesters or negotiate. His choice was made starker by the thousands coming to the capital to support Yanukovych from the eastern mining regions, where he was popular. The threat of clashes grew.

Eventually, Kuchma chose to talk and the country’s Supreme Court mandated a new round of voting in late December. Yushchenko won and was inaugurated as Ukraine’s third president on January 23, 2005.

The Orange Revolution showed impressive levels of self-organization and coordination, unlike anything seen in Ukraine’s modern history. Politicians teamed up with civil society leaders to plan and sustain protests during Kyiv’s harsh winter. But when the revolution was over, people went home, handing leadership to Yushchenko and a small cohort of politicians, hoping things would change, Kuchma-era corruption would end, and the new president would make good on his pledge to send “the bandits” to jail.

For the first two years of his term, when Yushchenko arrived at work each morning he prioritized meeting visitors from all over Ukraine who were crowding his office. His team would then spend the day solving problems identified by these people, problems that often fell under the purview of village councils or town chiefs.

Yushchenko’s office was frequently described as “paralyzed.” His chronic lateness for key meetings became legendary. His lack of vision and enthusiasm frustrated some but were lucrative for others.

“Yushchenko thought that it was enough to break Kuchma’s regime and Ukraine would flourish. He didn’t see it was his responsibility to envision what he wanted Ukraine to be, and imagine what he has to do and who he has to do it with to achieve these changes,” loyalist Oleh Ryabchuk, once Yushchenko’s chief of staff, later said in an interview with Zik TV channel.

Yushchenko’s lack of engagement and oversight empowered local bosses. During his tenure, local officials and their cronies made new fortunes by doling out communal land in Kyiv, Crimea and Lviv.

To the chagrin of his civil society allies, the new president seemed to get along well with Kuchma-era oligarchs. Far from facing jail terms, their business empires expanded, and so did their influence.

In 2006, Yushchenko bestowed the state award “For merit” on four of Ukraine’s richest and most powerful: billionaires Rinat Akhmetov and Igor Kolomoisky, and multimillionaires Serhiy Taruta and Hryhoriy Surkis. Two years later, Yushchenko visited the Japanese garden of art-lover Viktor Pinchuk, an oligarch whose business empire had mushroomed under the rule of his father-in-law Kuchma. The visit was widely interpreted as a signal that oligarchs had nothing to fear from his presidency.

New oligarchs, too, started to emerge.

For example, a new company, RosUkrEnergo, became the exclusive intermediary in 2006 for Ukraine’s gas imports from Russia. RosUkrEnergo received gas from Russia and sold it at a premium to Ukraine and Europe. Billions of dollars a year flowed through the company.

The state-connected Russian gas monopoly Gazprom owned half of RosUkrEnergo. The other half belonged to two Ukrainian businessmen who made billions of dollars in profit until 2009, when Kyiv and Moscow signed a different transit deal following pricing squabbles. Dmytro Firtash and Ivan Fursin controlled 45 and 5 percent of RosUkrEnergo, respectively, through an Austrian entity, Raiffeisen Zentralbank in Austria confirmed in 2006.

Questions surrounded RosUkrEnergo’s activities. Ryabchuk, Yushchenko’s former chief of staff, claimed in a 2018 interview with the Ukrainian news outlet Day.Kyiv.ua that he had conversations in the Kremlin in 2005 during which his Russian counterpart indicated that  RosUkrEnergo was improperly enriching top officials with allegedly skimmed profits from energy transactions. Ryabchuk added that Yushchenko was aware of RosUkrEnergo’s operational structure and did nothing to change it. Yushchenko has always denied wrongdoing. Toward the end of his presidency, in 2009, he famously said, “I didn’t deal in your stinky gas.”

RosUkrEnergo and people tied to it featured prominently in American diplomatic cables later released by Wikileaks. In one, Serhiy Taruta, a metallurgy mogul from eastern Ukraine, talked at length about RosUkrEnergo, arguing that Yushchenko was not personally corrupt, but that some of his advisors, including his brother, were allegedly improperly benefiting from their relationship with the president.

Roman Bezsmertny, a close ally who served as head of Yushchenko’s party later said in an interview that the president picked his friends badly: “He is a very well-informed, very smart and even a talented person in terms of macroeconomics. He has one weakness: He is a poor judge of character.”

Yushchenko would often start speeches with the phrase “dear friends.” It very quickly became a meme that mocked his attitude to the perception of corruption within his inner circle: The dear friends seemed to get what they wanted, and he turned a blind eye.

Less than a year into his presidency another close ally, Oleksandr Zinchenko, accused several people close to the president of corruption and resigned as chief of staff.

“Now corruption and bribery are gaining strength again. In many cases they are outdoing the old scale, expanding deep and eating into the pores of regional and central [government] structures. This phenomenon is becoming systemic,” Zinchenko told RFE/RL’s Ukrainian service at the time.

Zinchenko singled out the secretary of the National Security Council, Petro Poroshenko (who would later serve as president) and the leader of the president’s faction in parliament, Mykola Martynenko. He accused them of creating hurdles to gain access to the president, and using exclusive access to state resources for personal gain – a charge all vigorously denied.

Zinchenko also alleged that Poroshenko was trying to control the courts, calling judges and pressuring them to make unlawful decisions. Poroshenko denied the allegations.

In 2014, Poroshenko ended up being propelled to the presidency by another revolution in Ukraine: allegations of improper dealings and scandals would continue to trail him throughout his term. During Poroshenko’s tenure, some of the schemes that started under Yushchenko would finally be investigated.

A new anti-corruption agency in 2017 accused Martynenko of racketeering and large-scale misappropriation of public funds from state-owned companies, including nuclear energy monopoly Energoatom. He allegedly made tens of millions of dollars through kickbacks from supply contracts he helped to arrange, the anti-corruption agency said.

Another one of Yushchenko’s friends, David Zhvania, who was Martynenko’s partner in businesses related to supply contracts with Energoatom, was also accused of illegal profiteering. He eventually became a witness against Martynenko.

Swiss authorities accused Martynenko of laundering 2.8 million euros in a related case. Authorities in the Czech Republic are investigating other charges. Overall, the National Anticorruption Bureau required the assistance of some 50 countries to trace Martynenko’s financial transactions.

Others close to Yushchenko have since been accused of smuggling, illegally profiting from gas distribution contracts, improper arms exports and other schemes.

Yushchenko and his family did not escape accusations of corruption. A charitable foundation registered by his wife Kateryna in 2006 – to build a children’s hospital in Kyiv – raised over $18 million while Yushchenko was serving as president. Most of the money came from rich Ukrainian citizens and businesses, according to internal documents later leaked online.

The fund itself said a total of 633 businesses and 10,000 individuals donated money for the project. The hospital was never built and today it remains unclear where the money went. Kateryna Yushchenko said the project was thwarted by bureaucracy.

“As a lawyer, I regard these ‘charitable donations’ as a bribe to the president of Ukraine. In any state with rule of law the ex-president would be held criminally responsible and convicted,” Moskal said in a 2016 statement to the media.

Katya Gorchinskaya is a journalist and media manager in Ukraine. Twitter: @kgorchinskaya

Armenia and Azerbaijan hurtle toward war