Georgia’s coronavirus prevention efforts have been widely praised. But its treatment strategy also appears to have been a success. 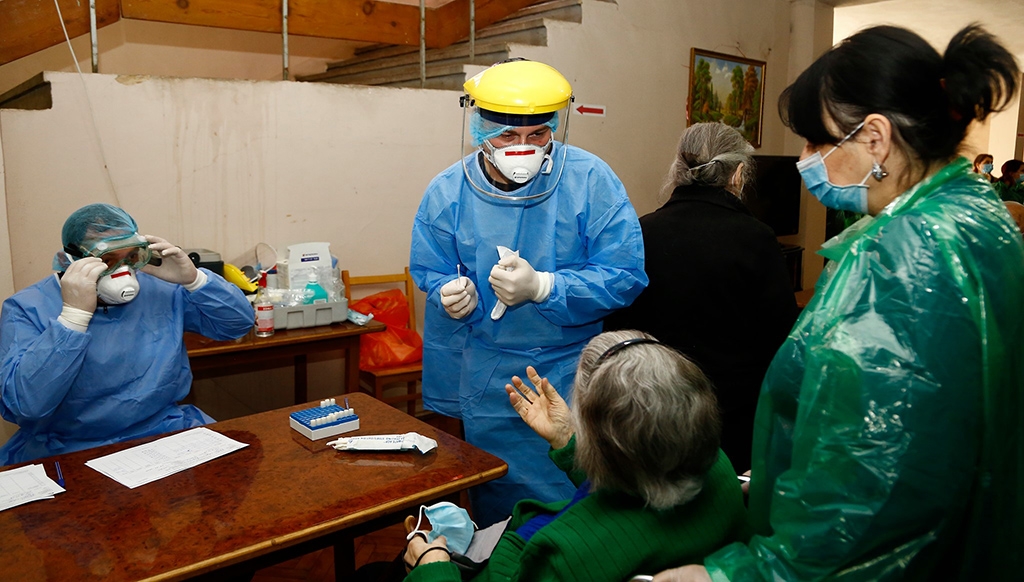 Giuli Urushadze, a vivacious, elegant, 80-year-old Georgian woman, had been looking forward to the dinner for months, unaware that it would nearly cost her her life.

Her old friend from Moscow, Lidiya, was organizing a memorial dinner for her recently deceased husband, the Russian journalist Sasha Romanov, and wanted to do it in his favorite city: Tbilisi.

The two women had lots to reminisce about: their husbands’ lives, deaths, and their friendship, which had outlived the Soviet Union and the decades of tumult it left in its wake.

But this was in February, and the clouds were gathering. The coronavirus was making its way across Europe; Georgia registered its first case on February 26. As it happened, the day set for the dinner, March 11, would be the day that the World Health Organization officially declared the disease a global pandemic.

Urushadze began having second thoughts and suggested canceling the event, but Lidiya would have none of it – “Oh please, it’s just another flu” – and went ahead with her plans to fly to Tbilisi.

Urushadze felt she owed it to her friend’s memory to show up at the dinner. Romanov had been there for her when her husband Suliko Khabeishvili, a prominent official in Soviet Georgia, was jailed during the dying days of the Soviet Union and then assassinated in the early days of Georgian independence.

“I was increasingly hesitant to go but I didn’t want to offend Lidiya, who came all the way from Moscow to organize this,” Urushadze said.

A little disaster was thus set in motion.

By the time the party of Georgians and Russians gathered at a restaurant in central Tbilisi, there were still barely a dozen cases of COVID-19 in Georgia. But the country was already beginning to shut down: Flights had been suspended with Italy, where the disease was spreading rapidly, and with Iran, which was the origin of Georgia’s first coronavirus case.

Talking with her friends, it became clear to Urushadze that Georgians and Russians were perceiving the danger of the disease very differently. “I could see that the coronavirus was not the big news and concern there as it was in Georgia,” she said.

Georgian television was heavily covering the spread of the disease, with public health officials and doctors giving constant warnings to limit social gatherings. “We felt it was important that the public heard it directly from the specialists,” Amiran Gamkrelidze, the head of National Center for Disease Control, told Eurasianet. “And we believe that the public, overall, listened to us.”

While there were inevitable skeptics, many Georgians complied with the warnings and wore masks, obsessively washed their hands and even disinfected their groceries when none of this was a state order.

At the dinner, Urushadze and her friends complied with Gamkrelidze’s instructions to refrain from kissing and hugging. Тhey waved and smooched at each other from a distance, laughing apologetically. The crazy new virus was on everyone’s lips – and in the case of one of the dinner guests, quite literally so.

The following day, the first coronavirus death in the South Caucasus was reported in neighboring Azerbaijan. Two days later, a national emergency was declared in the United States. Three days later Georgia switched to remote learning and working, and Urushadze began having chills.

She didn’t make anything of it. Her symptoms did not match the profile of COVID-19, including a dry cough and high fever – “All I had was a temperature of 37.7 [just under 100 Fahrenheit] and a little fatigue,” she said – and the odds of contracting coronavirus in Georgia still seemed low. The country had just over 20 confirmed cases at that point and Urushadze chalked her ailment up to a seasonal flu that was then making rounds in Tbilisi.

As her fever persisted her son, a well-known cardiac surgeon, insisted that she get tested for the coronavirus on March 18, the same day Georgia ordered all bars and restaurants to be shuttered.

“When the test came back positive it was a shock to me, I really was not feeling that bad,” Urushadze recalled. The following day she was admitted to the First University Hospital in Tbilisi, one of Georgia’s main clinics for treating COVID-19 patients.

Georgian clinics keep the identities of the coronavirus patients strictly confidential. But it is hard to keep a secret in this talkative city, and Urushadze is well known. Phones rang and Facebook messages popped with friends and relations tearfully sharing the news about her diagnosis. Many were convinced that contracting coronavirus at her age was a death sentence.

Urushadze found the reports of her imminent death exaggerated. She felt groggy, but she still chatted happily and maintained her sharp wit while hospitalized. “I was quite surprised to hear doctors saying on TV that in my hospital, an 80-year-old woman – which was me – was in grave condition,” she said.

Testing of the dinner’s other attendees revealed that six had been infected with COVID-19, as were the restaurant’s owner and his wife. A few other employees and customers who were not part of Urushadze’s party also contracted the virus at the restaurant and began to spread it themselves. A month later, one of the customers’ 86-year-old mother became the third person to succumb to the virus in Georgia.

Georgian media labelled the restaurant outbreak the “Romanov Cluster” – the pandemic has introduced the term “cluster” into the Georgian language – and at the time it was the single largest outbreak in the country.

The second-largest, known as “the Italian cluster,” originated with a pharmaceutical CEO who returned from a tour of Italy and immediately returned to work, ignoring orders to self-isolate for two weeks. He ended up infecting his colleagues including, by some epidemiologic irony, the son of Gamkrelidze, the public health chief.

From her hospital bed, Urushadze watched with a heavy heart as a wave of public shaming rolled across news and social media, raining fury upon her and her friends, as well as on the pharmaceutical executive, for flouting public health warnings. But she was relieved to learn that her children, grandchildren and great-grandchild did not contract the virus. “I had contacts with all of them but, incredibly, nobody got it from me,” she said.

At this point Georgia’s total count stood at only 40 cases, but the two clusters prompted authorities to further lock down, quarantining all arrivals from abroad regardless of which country they were coming from. A state of emergency was announced on March 21 under which intercity transport was suspended, roadblocks set up on highways and gatherings of more than 10 people banned.

Two days later, a new cluster was discovered in southeastern Georgia. The authorities locked down that area and hardened nationwide restrictions. An evening curfew was imposed, the size of allowable gatherings was reduced to three, and, eventually, private car travel was banned.

All together, these measures resulted in one Europe’s most successful efforts to flatten the pandemic’s curve, with Georgia today registering fewer than 1,000 cases, and eventually giving the country the confidence to start ending the lockdown in May.

Meanwhile, Urushadze’s condition was getting worse. On March 25, her blood oxygen levels dropped precariously. “They increased my medication, I got weak and drowsy,” she recalled. “I was seeing everything like through a haze. I vaguely remember someone slapping me on my leg and asking me how I was feeling.” The next day, she was rushed to the intensive care.

Georgia’s first COVID-19 recoveries came just as the battle for Urushadze’s life began. To date, only 15 people have died of coronavirus in Georgia, most of whom were of advanced age, had a severe underlying health condition, or both.

That makes Georgia a leader not just in preventing COVID-19, but in curing those to do contract the disease: The country has one of the lowest case-mortality rates in Europe.

But while Georgia’s success in preventing the spread of the disease is relatively easily explained, how it managed to achieve such a high rate of recoveries is less clear.

Gamkrelidze suggests that the two are connected: Effective containment provided Georgia the breathing room to prepare its healthcare system for treating COVID-19 patients. “We’ve had the time to make sure all patients received proper care,” Gamkrelidze said.

In its approach to treatment, Georgia is generally guided by the protocols of the World Health Organization and America’s Centers for Disease Control.

One aspect that sets Georgia apart from the U.S. and most European countries, though, is that in Georgia all patients diagnosed with COVID-19 receive in-hospital treatment, no matter the gravity of their condition.

A connection between in-patient care and COVID-19 survival rate has not been statistically proven. Some physicians, however, have suggested that at-home patients are often unaware of the critical moment in the disease’s progress when oxygen saturation in their blood plummets dangerously, the condition known as silent hypoxia. By the time they make it to a hospital they are already on the verge of respiratory failure.

Constant monitoring of Urushadze’s condition helped ensure that her hypoxia was detected early.

Beyond that, there are a dizzying array of other, often contradictory theories that attempt to explain the wide variability in fatality rates across countries. Scientists around the world are investigating everything from differences in clinical methods to genetic vulnerability to demographic distribution to potential cross-immunity provided by early tuberculosis vaccinations.

Georgia also relied on hydroxychloroquine, an anti-malaria drug, in treating COVID-19 patients well before U.S. President Donald Trump controversially endorsed the medication. Global scientific opinion has oscillated wildly about hydroxychloroquine’s effectiveness in treating the coronavirus, with some research suggesting that the risks of side effects outweighed the drugs’ potential benefits. In recent weeks the World Health Organization has suspended, allowed, and then suspended again clinical studies of the drug, as findings on its risks and benefits continue to be inconclusive.

Georgian doctors have been defensive of their use hydroxychloroquine, insisting they have observed none of the complications that some studies attribute to the drug. The nation’s chief virologist, Tengiz Tsertsvadze, and his colleagues have engaged in an acrimonious public exchange about the drug with several Georgian doctors based in the U.S., where opinion is far more skeptical than in Georgia.

When Urushadze came to, she asked what date it was. “I couldn’t believe it when they said it was April 4,” she said. “I was out for 10 days.”

The nurses fussed over her: “We didn’t think you would make it, you were doing so bad,” one told her. They called her “granny” – not the preferred term of address for a refined member of Georgia’s old-school intelligentsia, but she nevertheless appreciated their care and enthusiasm.

The other people who got sick after the March 11 dinner recovered without suffering the complications that Urushadze did. “I was a case study,” she said. “It went by the book: mild symptoms at first, then rapid deterioration, then pneumonia, then sepsis.”

She had been treated with hydroxychloroquine, though what role it played in her recovery is unclear. And it cannot be conclusively said what exactly – her treatment, general good health, or both – helped Urushadze recover and become part of Georgia’s success story.

It took weeks of physical therapy before Urushadze could get back on her feet. She still has bedsores and weakness in her left leg. It took some time for her to be able to use her hands again, but as soon as she could, she logged on her Facebook page and posted a status update: “I’m 80 years old and I defeated the coronavirus.”