A series of defections leaves Armenia's parliament in Pashinyan’s hands

Exodus from the Republican faction puts an end to its decade-long hegemony — and opens a path to a snap election. 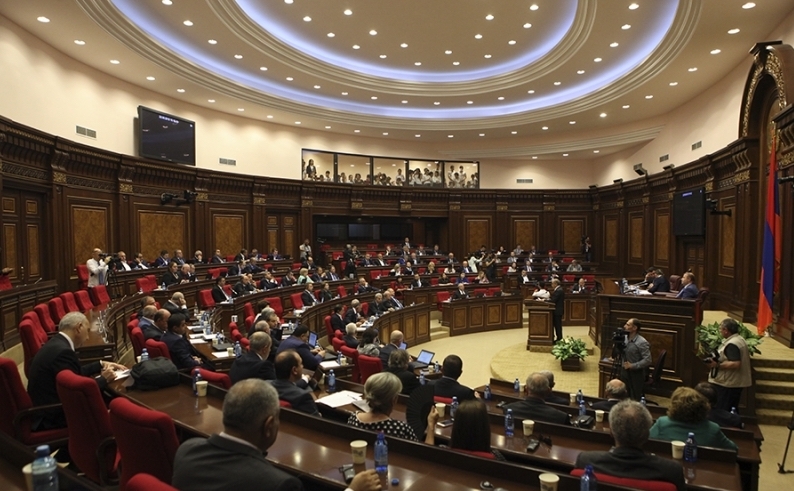 Armenia's parliament in session on May 22. After a string of defections, the former ruling Republican Party has lost its majority. (photo: parliament.am)

The Republican Party of Armenia lost its parliamentary majority when MP Samvel Aleksanyan announced on June 6 that he was leaving the faction.

Aleksanyan's defection now leaves the formerly ruling Republicans with 52 out of 105 seats. He joined five other Republican lawmakers who have jumped ship in recent days and are expected to support Prime Minister Nikol Pashinyan's Yelk bloc, as well as their allies in the ARF Dashnaktsutyun and Prosperous Armenia parties.

This new balance of power in parliament opens a path for a snap election, a priority of the new government that brands itself as an interim one. Earlier this month, Republican bosses had signaled that they were ready to discuss a snap election. They also were expected to approve the government program, a blueprint of new cabinet’s social and economic policies that should be presented in the National Assembly this month. Now, however, any potential drama has been averted: by effectively controlling the majority of votes, Pashinyan and his team are no longer in need of favors from the Republicans.

Aleksanyan’s move comes one week after the National Security Service accused his family-controlled holding of large-scale tax fraud worth of estimated $15 million. The episode was a part of an anti-corruption purge announced on May 19.

Unlike high-profile anti-corruption campaigns in Russia and elsewhere in the post-Soviet space, Pashinyan’s cabinet is not aiming to jail those involved in economic crimes. The NSS head Artur Vanetsyan has said he considers reimbursement of damages made to the state sufficient grounds for dropping criminal charges. Also on June 6, Armen Unanyan, a businessman accused of customs brokerage fraud totaling $7 million, said that he had already repaid $4 million to the state and was preparing to return more.

The Republicans are also being stripped of governorates, which in the past have been a key tool for the party to gain its electoral victories. Pashinyan is in the process of appointing new governors for all of Armenia’s 10 regions from the ruling coalition of Yelk, Prosperous Armenia and ARF Dashnaktsutyun.

With the end of Republican control in parliament, Yerevan city government becomes the party's last legislative stronghold. RPA controls 46 of 65 seats in the city council, and Republican mayor Taron Margaryan has made clear that he had no plans of resigning. The party also maintains control over other local legislatures.

Perhaps the key Republican holdover is Armenia’s General Prosecutor, Artur Davtyan, who has insisted that there are no political prisoners in the country. Through the prosecutor’s office, as well as several judges suspected of taking orders from the Republicans, the party may still exercise indirect control over the judiciary.

Nevertheless, more and more court hearings have been ending in a fashion that suggests the erosion of Republican influence. Since mid-May, half a dozen jailed opposition figures have been released on bail or police bond. Guarantee letters for some of them were signed by Yelk bloc MPs, including the current First Deputy Prime Minister Ararat Mirzoyan.