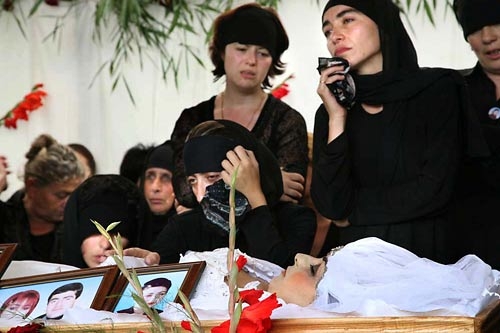 Relatives and friends attend the funeral of Iveta Toria, a Gali resident who died in late night July 6 bomb blast at the open air cafe in the center of the city. (Photo: Sophia Mizante)

It started off as a child’s birthday party. But a recent late night celebration at an outdoor café in Georgia’s separatist region of Abkhazia ended up becoming the latest indicator of brewing trouble between Sukhumi and Tbilisi.

The July 6 explosion ripped through the Svetlyachok (Firefly) café in Gali, a predominantly ethnic Georgian town in southern Abkhazia, leaving four people dead and six badly injured. The explosion -- which occurred directly across from the Russian peacekeeping headquarters for the region -- followed a series of blasts in the Abkhaz towns of Gagra and Sukhumi. Those incidents had helped to infuse the Abkhaz peace process with a sense of urgency. [For background see the Eurasia Insight archive].

Both sides blame the other for the Gali explosion. Many Georgian officials believe that Russia, which serves the de facto Abkhaz state as both peacekeeper and protector, somehow had a role in the explosion.

But within Gali itself, a crumbling town of abandoned buildings and gutted roads, the blast is viewed not as the result of a convoluted conspiracy, but as just another atrocity that cannot be explained. "People are not discussing who’s to blame," one man said. "It happened, and that’s all."

A United Nations Observer Mission investigation into the blast is ongoing.

In this border area, local Georgians and Abkhaz largely absolve each other from direct involvement. "All of us feel we have lost a main part of our body and spirit," said one Georgian woman, a lifelong Gali resident who requested anonymity.

"They ask me in Tbilisi, ’Why do you mourn an Abkhaz?’" she continued. "I say, ’You have to live here, among these people. ... The Abkhaz feel like part of our family."

"All the Georgians who were at his funeral cried. ...They couldn’t have been ordered to do that," commented the mother of 38-year-old Abkhaz security chief Jansukh Muratia, one of the four people killed in the explosion. "Who knows who killed them?"

Not far down the road, in the village of Achiguara, that sentiment is shared. Relatives, friends and sympathizers gathered for the open casket funeral of 27-year-old Iveta Toria, another of the blast victims, and an ethnic Mingrelian, a minority group based in Georgia. Friends, some wearing photo pins of the dead woman, said that Toria and security boss Muratia had planned to marry.

The dark irony is not lost on locals. "This was only good for the Russians," spat out one young man, seated in a park not far from Gali’s Svetlyachok explosion site. "They want to show other people that they’re needed here, that they alone can provide security."

"The Abkhaz understand that they cannot change anything because their power comes from Russia," he added.

A spokesperson for the Commonwealth of Independent States peacekeeping forces in Abkhazia declined to comment about the situation in Gali without prior clearance from Moscow.

For now, though, local animosity toward Sukhumi appears limited to the July 1 decision to close Abkhazia’s de facto border with the neighboring Georgian region of Samegrelo. Some town residents claim that locals now have to pay between 50 and 100 rubles (about $2.15 to $4.30) to have their names put on a list of people allowed in or out of Gali. Only a handful of individuals could be seen on two recent crossings.

Meanwhile, Abkhaz officials are grappling with a fresh peace proposal - a three-step German initiative that would open with a series of confidence-building measures and the return of internally displaced persons (IDPs), followed by a push for reconstruction sponsors, and, finally, a discussion of Abkhazia’s status. De facto Abkhaz President Sergei Bagapsh announced that the separatist territory could not accept the German plan in its original form.

In an official statement released by Bagapsh’s office, the Abkhaz leader noted that talks would continue, but that the German plan had to reflect Abkhazia’s own interests - in particular the withdrawal of Georgian troops from the Upper Kodori Gorge, a narrow strip of Abkhazia still controlled by Tbilisi. Abkhaz leaders also want officials in Tbilisi to sign a non-aggression pact. "We’ve been presented with a project, but it’s necessary to prepare the document itself. There are many aspects that need to be agreed on," Bagapsh said in his July 19 statement.

Abkhaz representatives in Gali, meanwhile, seem more concerned about the potential economic impact of the German plan, especially the aspect touching on IDP return. The region’s economic infrastructure already is unable to support the existing population. A large influx of returnees at this time could create a dangerous social environment, Abkhaz representatives contend.

"This country, in which the population lacks jobs, just came out from under a blockade," Ruslan Kishmaria, Bagapsh’s trouble-shooter in Gali, said in reference to Russia’s March decision to withdraw from the 12-year economic blockade of Abkhazia. "We ourselves sit around without jobs. You can see perfectly well what condition our Abkhazia is in."