Abkhazian officials acknowledge, but downplay, the role Russia played in securing Syrian recognition of their independence 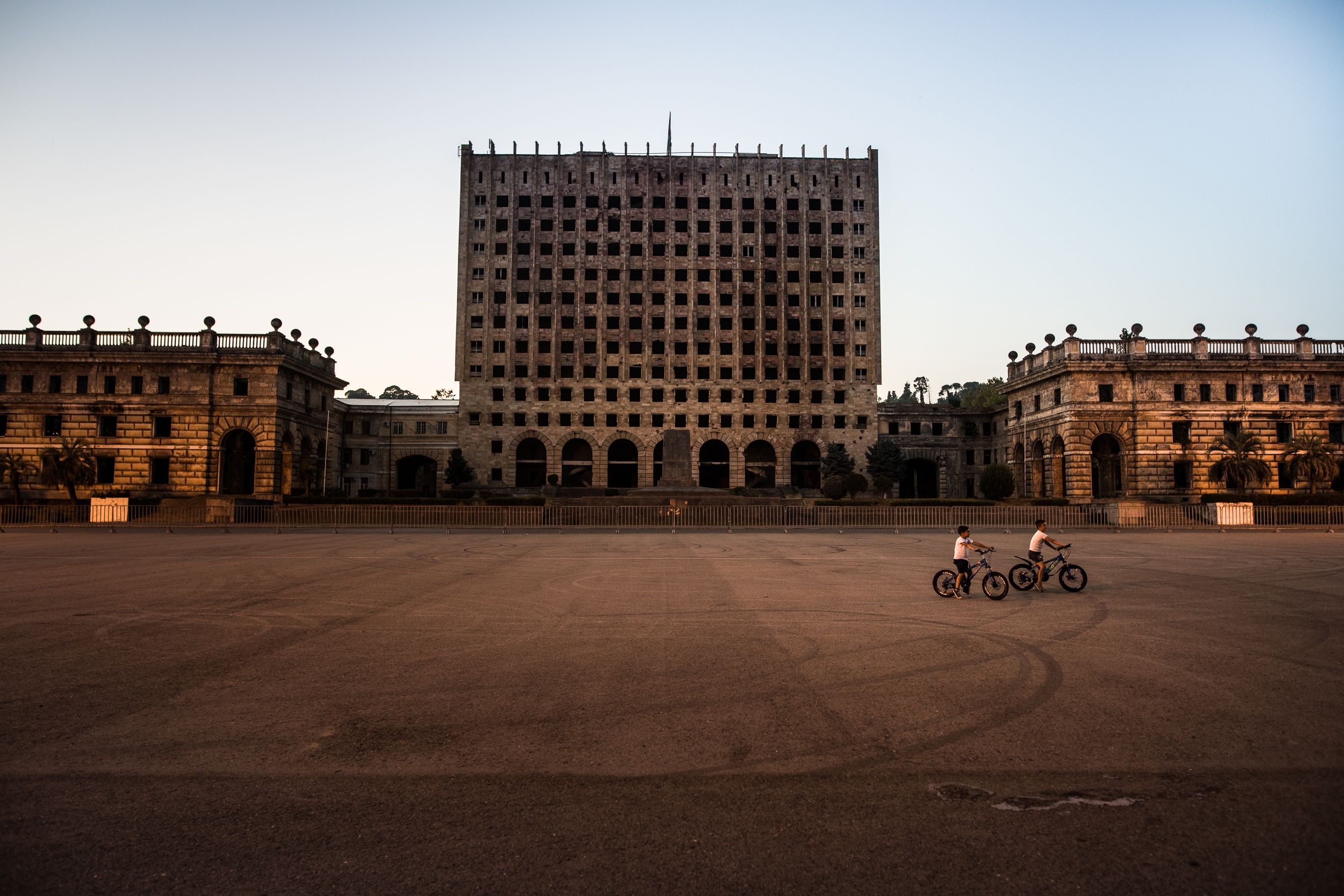 The parliament of Abkhazia (Charlotte Maxwell)

Outside Abkhazia’s derelict former parliament, burnt beyond repair during the territory’s secessionist conflict with Georgia in the 1990s, several unlikely flags fly in the sea breeze. The standards of Russia, Nauru, Venezuela, Nicaragua, Tuvalu and Vanuatu indicate the few nations to have recognized Abkhazia as an independent state, much to the consternation of Georgia and its Western allies.

But another flag will soon be added. In late May, Syria established diplomatic relations with Abkhazia, along with fellow Georgian breakaway territory South Ossetia. In doing so Damascus restarted a process that had appeared stalled: Following Russia’s initial recognition in August 2008, the last country to formally recognize Abkhazia and South Ossetia was Tuvalu, in September 2011. The status of Tuvalu’s recognition is contested; Georgia says the Pacific island later retracted its diplomatic links, Abkhazia claims otherwise.

“This is as important as the first international recognition of the Republic of Abkhazia,” Abkhazia’s de facto President Raul Khajimba told Eurasianet in his office overlooking the Black Sea. “Syria is in a state of war today,” Khajimba continued. “They find themselves in a difficult situation, but they found the courage to recognize the Republic of Abkhazia.” 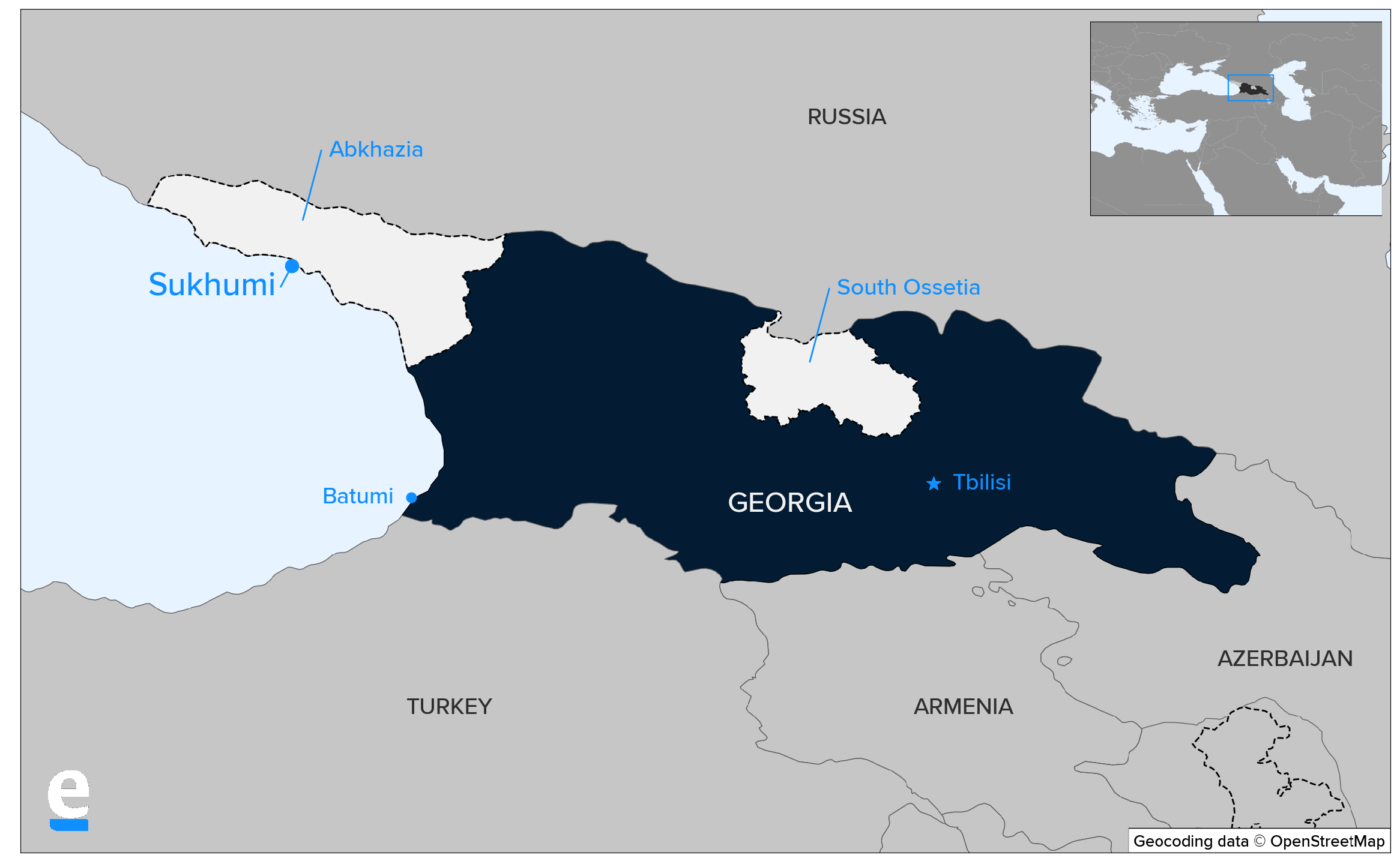 In Abkhazia and further afield many have interpreted the Syrian recognition as a gesture of thanks from Damascus to Moscow; Russia's military intervention in Syria's civil war has turned the tide in favor of Bashar al-Assad’s government forces. When Syria's Foreign Ministry announced the recognition, they did so “in gratitude for the assistance against terrorist aggression” – something which has been negligible from Abkhazia and South Ossetia but decisive from Russia.

Abkhazian officials acknowledge a Russian role, but insist it was secondary.

“Good relations between Russia and Syria are a plus,” former de facto foreign minister Viacheslav Chirikba told Eurasianet. But he denied that Damascus's recognition came at Russia’s behest.

“It is the result of a lot of different efforts – Russian assistance of course – but mostly direct contact between Abkhazian and Syrian diplomats and cultural figures,” Chirikba said. “Our people regularly went to Damascus – from the chamber of commerce, the foreign ministry, the finance ministry – and it ultimately resulted in this political act.”

“We had great technical support via the staff of the Russian Embassy when our delegation was in Syria,” said Inver Alshundba, head of the Middle East and Africa department at Abkhazia’s de facto foreign ministry.

Abkhazian officials are hopeful that Syria’s recognition will lead to further cooperation. While the distance between Abkhazia and most of its other diplomatic partners has inhibited engagement, Chirikba joked that “you can sail a boat from here to Syria – it is much more accessible.” Alshundba says that his ministry is investigating the possibility of an Abkhazian embassy in Damascus, and adds that “there will be a positive impact on our trade relations.”

Abkhazian officials like to focus on the long history of ties between Abkhazia and Syria. Khajimba, the de facto president, said that Abkhazians trace their ancestry to the ancient Hittite people, who he says “came from Syria.” In the 19th century, Russia's conquest of the Caucasus drove many of the indigenous inhabitants out, and thousands of Abkhazians and Circassians (a related North Caucasus people) emigrated to the Middle East. “We have ancient historical ties,” Khajimba said.

Since gaining de facto independence, Abkhazia has sought to repatriate its ethnic kin from Syria and Turkey, and these efforts were given a sense of urgency following the outbreak of the Syrian civil war in 2011. The Abkhazian government facilitated the arrival of over 500 ethnic Abkhaz Syrians, many of whom remain today.

“When the Syrian conflict broke out, Abkhazia was one of the first countries to show its compassion for the people of Syria,” Alshundba said. The refugees are a “natural bridge between Abkhazia and Syria,” added Chirikba, who orchestrated the repatriation program before stepping down in 2016.

Other Abkhazians have been more cynical about the Syrian recognition. “With all due respect to our diplomats, it is clear that this step by Damascus is a sign of its gratitude towards Russia,” wrote prominent journalist Inal Khashig on the website JAM News. “Nevertheless, one more state has established diplomatic relations with Abkhazia. [...] Abkhazia is in a good mood after Syria recognized its statehood.”

Alshundba, head of the Middle East and Africa department at the foreign ministry, said his office is actively seeking to secure the recognition of other states. Some might think of Turkey, where the Abkhazian diaspora is much larger. But in a commentary for Echo Kavkaza, columnist Vitaliy Sharia noted that no one should expect Ankara to follow Damascus. Turkey’s “relations with its northeastern neighbor, Georgia, are far more important to it.”

“It is not just about Middle Eastern or Arabic governments,” argues Alshundba. “The foreign ministry is constantly working to establish contact with all the governments that are interested in mutually beneficial cooperation based on bilateral respect. That will go on, until everyone recognizes the Republic of Abkhazia.” Alshundba refuses to disclose details. “I can only say that we are working on this – I cannot tell you any names,” he said, citing the counter-recognition efforts by Georgia and its allies.

In 2017, the United States passed a law banning aid to countries that recognize Abkhazia and South Ossetia. Georgia responded to Syria's recognition by breaking ties with Damascus and even refusing to let Syrian airlines use its airspace. The European Union, among other international actors, also criticized Syria’s move and reiterated their support for Georgia.

“We have worked extensively in Africa, Latin America, the Pacific,” Chirikba said. “Iran, Arab countries, North Africa, Ethiopia, Eritrea. The problem is that most states, to greater or lesser degrees, are financially dependent on the West.”

Or, as Khashig wrote: “No one knows how long it will take for Sukhum to see the next recognition,” using the local spelling for the Abkhazian capital. “Maybe a year – Iran, for example, is now trumped by the efforts of Trump. Or maybe 10 years. In this geopolitical game, very little depends on us, the Abkhaz.”

Kieran Pender is a freelance journalist, contributing to a range of publications including The Guardian. He is also a Research Fellow with the Black Sea Institute.