Actors Mourn as Tajikistan’s Oldest Theater Is Torn Down 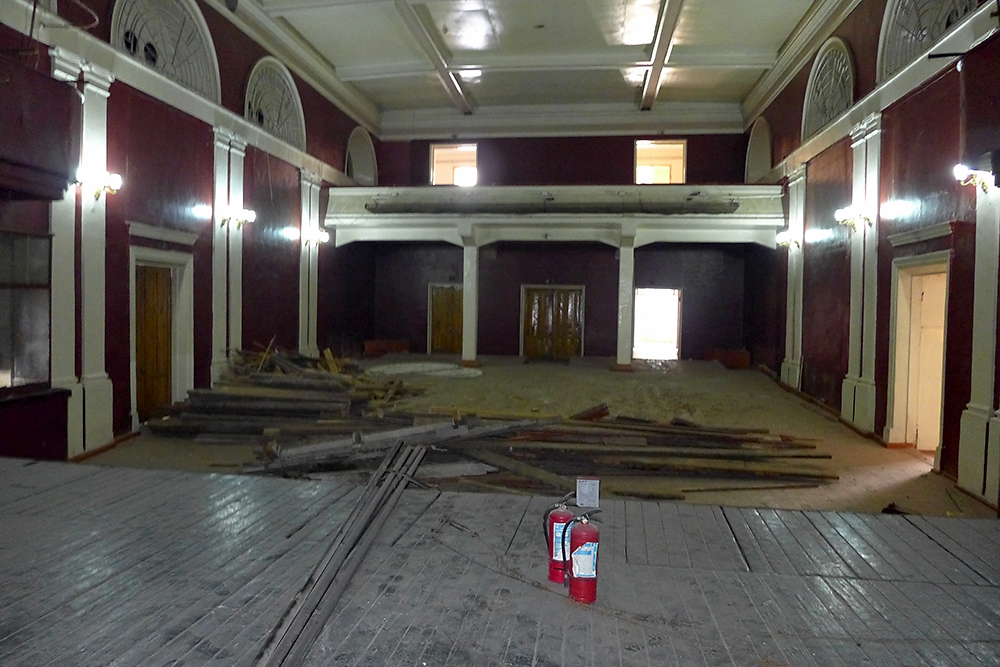 Dushanbe’s Mayakovsky Theater is the oldest in Tajikistan. (Photo: EurasiaNet)

The director of Dushanbe’s Mayakovsky Theater speaks and weeps as though a close relative has died.

During the past few weeks, demolition workers have been gradually dismantling her troupe’s Soviet-built home — a low-key, utilitarian and yet much-loved constructivist building along the main city thoroughfare.

“I don’t know when this pain is going to fade. We walk around like madmen. We have decided that when they pull our theater down, we will for a while try to avoid passing through the center,” said Mayakovsky director Munira Dadayeva.

Theatergoers and actors have already bid farewell to what many of them call their second home. On the interior walls, which were stripped in late July, actors scrawled notes of apology that their efforts to save the building had not proven enough.

Dadayeva, 43, said she first visited Mayakovsky when she was only four years old. While still at school, she began treading the boards. “To every new actor that comes to the theater, I say: ‘Welcome to our home.’ The first time I came onto this stage was with some great actors — for me they were like unreachable stars,” she said, struggling to hold back her tears.

Lovers of the unassuming red building have long known these days would come. Many Soviet-era structures have been pulled down in Dushanbe over the past few years, despite public opposition. And the trend shows no sign of slowing, even amid a protracted period of economic stagnation. Officials brush off criticism, saying the edifices targeted for removal are of negligible historical or cultural significance and need replacing with more modern buildings.

That position glosses over quite a bit of history.

In its first incarnation, the building that went up in the late 1920s in a shabby village-cum-town then called Stalinabad served as the House of Peasants, a clubhouse for farmers. The construction was the first completed in Dushanbe as a “capital building” — that is to say designed with foundations for long-term use.

It was in the House of Peasants that on October 19, 1929, Tajik statesman Nusratullo Makhsum declared the creation of the Tajik Soviet Socialist Republic.

Historian Gafur Shermatov scorned the excuses given for the demolition.

“They justify the demolition of this building by arguing that it is very dilapidated and unable to withstand earthquakes, but this is not true. This is a very good and solid building,” Shermatov said. “It was designed by Pyotr Vaulin (…) and constructed to quadruple strength. It will soon be 100 years since it was finished, and yet it is has not been damaged once, even though it has been through many earthquakes.”

There are few cultural developments in Tajikistan’s modern history that did not first occur in the House of Peasants. It was home to Tajikistan’s first cinema, first modern library, first public reading rooms, first theater and first radio broadcasting center. Even the first driving school and first home to the Pioneers youth movement.

“Our history began in that very building. Killing the House of Peasants means killing the history of Dushanbe and the point from where it began,” Shermatov said.

City authorities have promised to provide the Mayakovsky company with new premises, but nothing firm has been done so far on that front. According to Dadayeva, the government said there would be no room for them at the gargantuan $100 million National Theater, which began construction in 2015.

“That is why they promised to make us a new building. But we have heard nothing yet. Our things are just scattered around,” Dadayeva said.

Decades’ worth of equipment accumulated by the theater has been stashed at the Lohuti theater, another site up the same road slated for removal, at the Tajikistan cinema and in storage facilities.

“If they give us new premises, this will be the theater’s third birth,” Dadayeva said.

When the civil war broke out in the 1990s, the Mayakovsky company tried to keep on going, but eventually relocated temporarily to the Russian city of Magnitogorsk. Before that happened, in 1993, officers from the Russian military base in Tajikistan raised 200,000 rubles in a whip-round to keep the theater going.

“During the war, I remember rehearsing with (the actor) Barzu Abdurazakov in the play Gelsomino. The crowd was sitting in the square shouting. The men stood on guard and women brought them whatever food they could muster. Despite the rallies, we would go to work and continue our business,” Dadayeva said.

After the civil war, the Mayakovsky troupe also acted as an unofficial diplomatic bridge between Tajikistan and Uzbekistan, whose ties have long been troubled.

“In 2010 and 2012, when relations between Tajikistan and Uzbekistan reached their lowest point, our theater visited the Youth Theatre of Uzbekistan (in Tashkent) and performed there,” said actress Mavlon Najmutdinova. “That was a time when our politicians were not talking to one another. But through theater we found a common language.”

As Tajikistan’s last remaining Russian-language theater company, the Mayakovsky was the only troupe able to continue going on tours abroad. Efforts to enlist the help of the Russian Embassy in saving the theater went unheeded.

Actor and director Hurshed Murtazayev said the hardest thing has been to see the audience breaking down in tears as the troupe took their bows during the final few performances. “I don’t know how we are going to be able to walk past this place when it has been destroyed,” Murtazayev said. “Now the theater [company] needs a roof over its head, seats for the audience and a stage. If they give us a roof and a changing room, we will continue.”

Once Mayakovsky is gone, the wrecking ball is expected to be turned onto other familiar monuments and buildings. Next slated for destruction is a monument in central Dushanbe erected to mark the 20th anniversary of the Tajik Soviet Socialist Republic. It is likely the old parliament building and the mayor’s office will follow.

“The city should grow and develop, but it should not develop at the cost of moving things around, but through the accumulation of valuable objects,” Shermatov said. “The new must not destroy the old.”