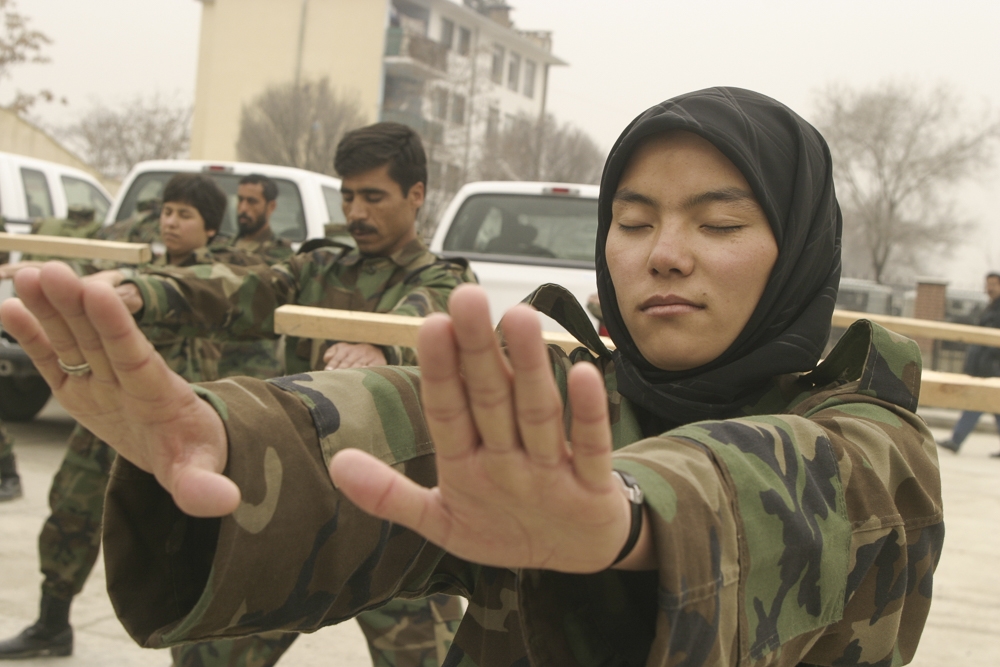 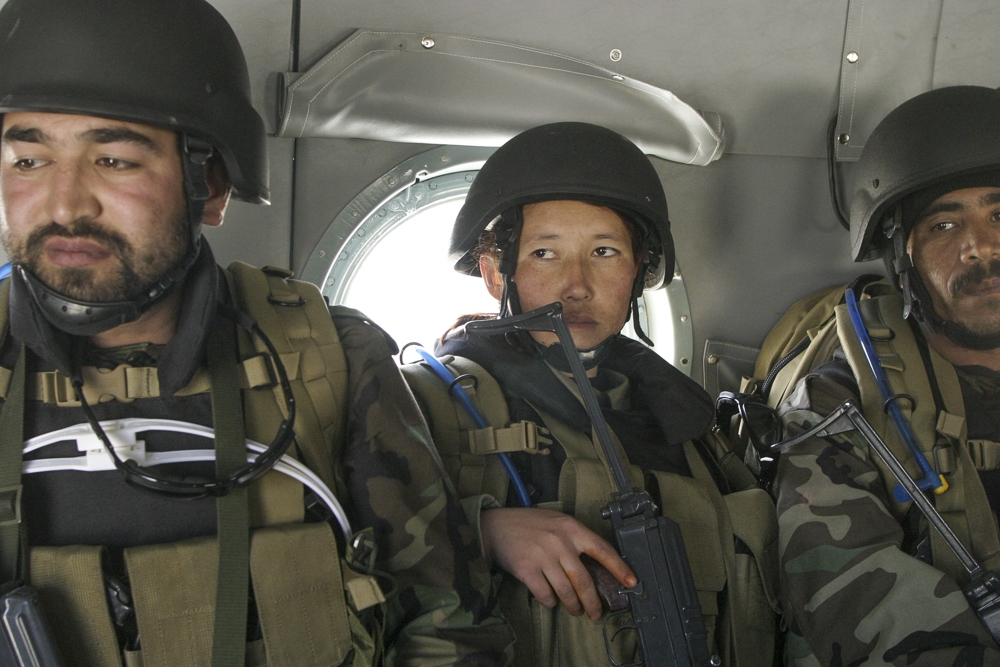 NIU students ride the Soviet-made MI8 helicopter out to a mock mission east of Kabul. (David Trilling for EurasiaNet) 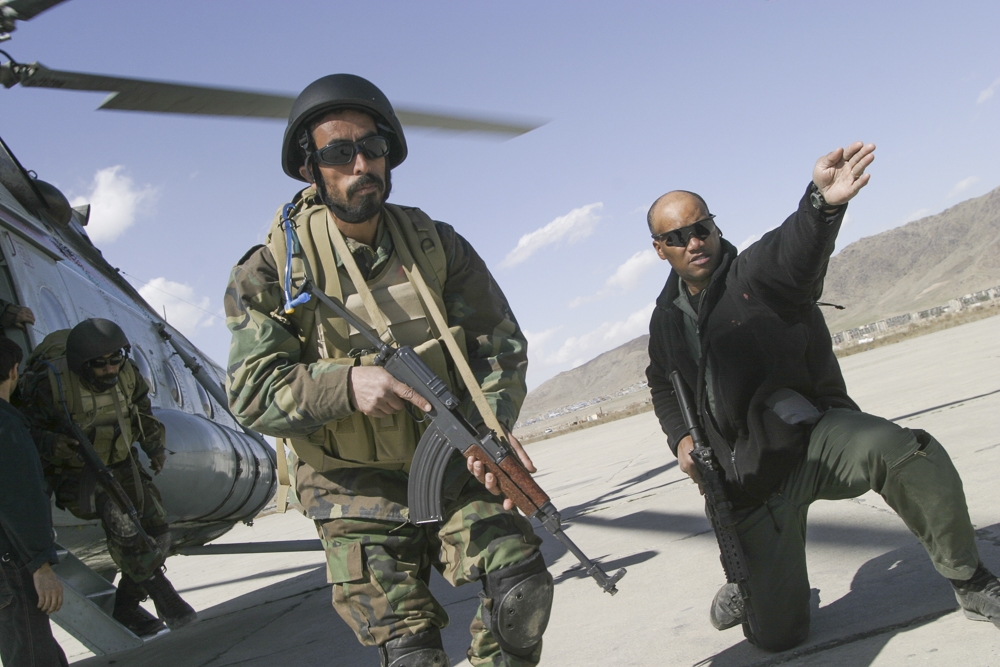 NIU student guided off the helicopter by a blackwater instructor at Kabul International Airport. (David Trilling for EurasiaNet) 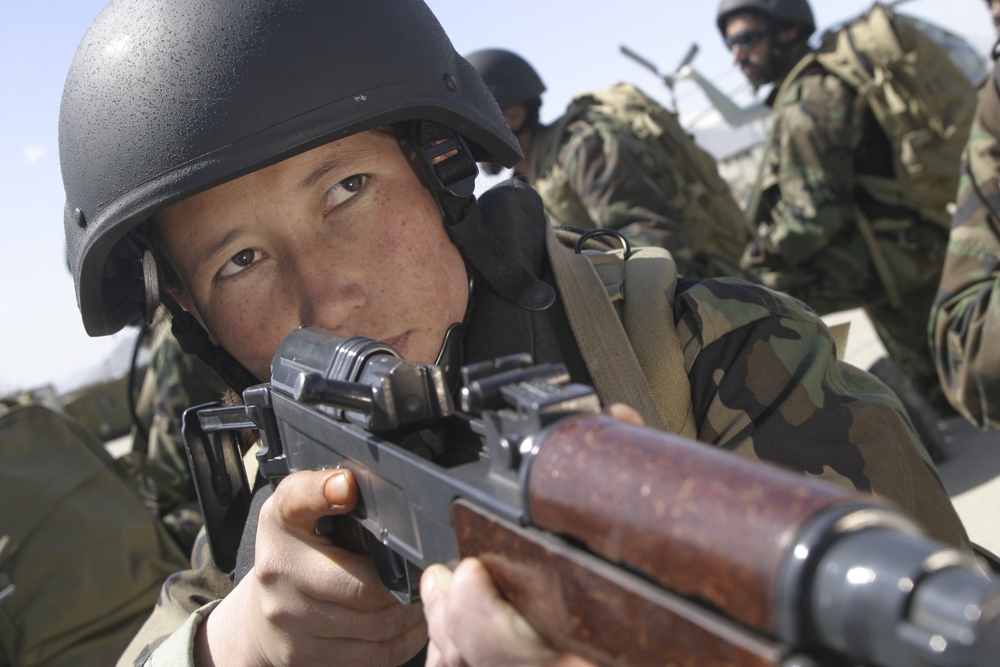 An NIU student helps her team cordon off an area around the landing pad at Kabul airport. (David Trilling for EurasiaNet) 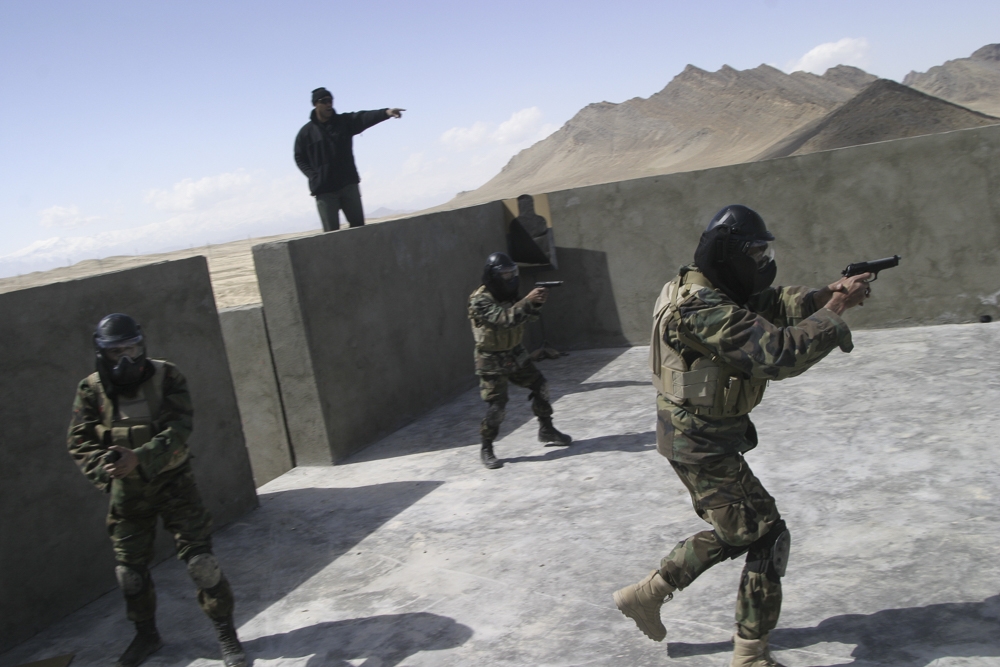 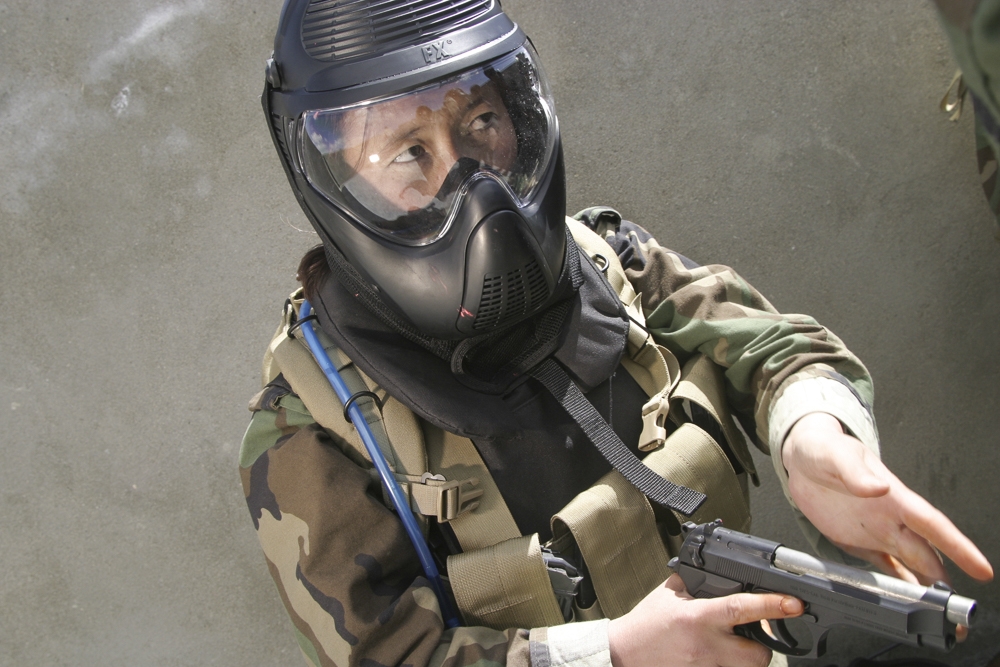 A female NIU student wearing protective headgear. In the close-quarter battle simulation exercises, students fire a type of paint-bullet which can be very painful. (David Trilling for EurasiaNet) 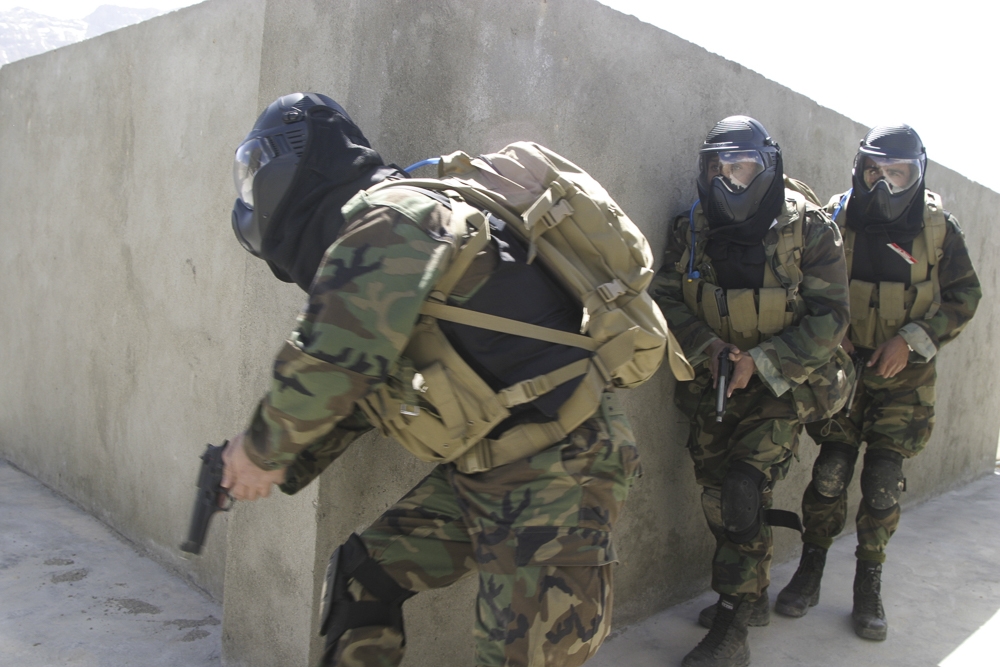 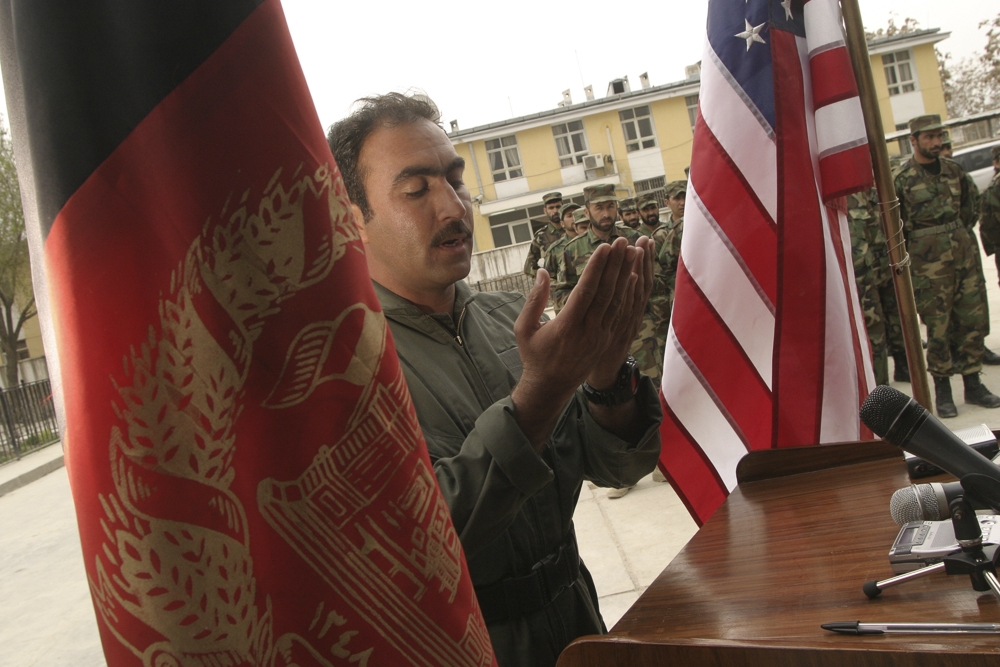 The Afghan government’s efforts to contain the cultivation and trafficking of narcotics registered perhaps its biggest success to date when members of an elite unit confiscated nearly a half-ton of heroin and arrested seven suspected smugglers, authorities announced April 23. US military advisers who had helped forged the Afghan Transnational Border Security Force hailed the operation as "counter-narcotics at its best."

With reconstruction efforts in Afghanistan struggling to gain traction in many areas, many Afghans have once again turned to poppy cultivation as a source of sustenance. Since the radical Islamic Taliban movement was driven from power in 2002 during the US-led campaign against terror, Afghanistan has reemerged as the world's leading producer of opium and other poppy-related narcotics. [For background see the Eurasia Insight archive]. According to some estimates, roughly half of the Afghan economy now revolves around the cultivation and trafficking of illicit drugs. Afghanistan's drug dependency threatens to overwhelm efforts to develop civil society in the country.

The recent drug seizure operation took place near the Iranian border, according to a statement issued by the US military. American military personnel played only a minor role, supplying "mentoring and some logistics" to the elite Afghan border troops who carried out the raid, the military statement said. In all, 479 kilograms of heroin (almost half a ton), with an estimated street value of about $2 million, were taken into custody.

While a success, the raid barely makes a dent in the burgeoning problem of narcotics trafficking. According to United Nations Office on Drugs and Crime estimates, Afghanistan's total opium output in 2004 was 4,200 tons, a 17 percent increase over the previous year. A recently published US State Department report stated that, since 2003, the area under poppy cultivation in Afghanistan has tripled and now encompasses 510,000 hectares. The report went on to suggest that Afghanistan stood on the brink of becoming a narco-state.

Not all anti-trafficking operations have gone well. An anti-drug campaign in Kandahar Province -- one of the country's largest poppy cultivation centers and a stronghold of Taliban supporters  met fierce resistance in mid-April. An operation to eradicate local poppy crops sparked a 2,000 strong protest in the Maiwand District, roughly 30 miles south of Kandahar city. In the ensuing gun-battle, one Afghan police officer and six civilians were killed. The incident forced the temporary suspension of the regional anti-drug campaign.

Meanwhile, in Kabul, the government keeps on training officers for the anti-drug struggle. During the Taliban era, the sight of women in combat fatigues would have unimaginable. But on a recent gray Kabul morning, four Afghan women lined up with their male comrades, a group of police in green camouflage and American-issue combat boots. Together, they marched in formation around a large, barren park in Karte-Seh in a Western neighborhood in the capital. Like so much of Kabul, Karte-Seh was largely destroyed by Mujahedeen factions fighting for control of the capital in the mid-1990s.

The troops belong to the National Interdiction Unit of the Counter-Narcotics Police of Afghanistan (CNPA), a force that reports directly to the Ministry of the Interior. So far, four classes of NIU officers -- the latest class comprising 23 cadets  have gone through a six-week training course. The four female graduates bring to 10 the number of women trained as NIU officers. Besides encouraging other women to take part in their country's reconstruction, it is hoped that their presence will ensure that strict cultural norms of gender separation are upheld during NIU searches for illegal drug production in private homes.

Funded by the US State Department and the Department of Defense and contracted by the Drug Enforcement Agency (DEA), the NIU is trained by specialists from Blackwater, a US-based security consulting firm. With American trainers and state-of-the art equipment, NIU officers have received instruction in the latest arrest techniques, as well as in the proper methods for the handling and preservation of evidence and crime scenes. They also have received training in the use of firearms and self-defense. All these skills were honed at training facilities that simulate conditions in the field including mock raids on houses. The trainees also learned sophisticated GPS navigational techniques, and received logistical training, including how to utilize helicopters in the conduct of precision raids.

The work of Blackwater and the DEA is part of a national public awareness campaign to counter widespread drug smuggling in Afghanistan. The campaign has aimed to train police not to focus on poor farmers who are often forced into opium cultivation. Instead, they have been trained to stop and apprehend those further up the opium supply chain. One hundred NIU officers have been trained since September 2004. In addition to American support, the governments of Britain and France have also sponsored anti-drug training initiatives. At least one more class of NIU cadets is expected to undergo training this spring.

David Trilling is a photojournalist working in the Caucasus and Central Asia.