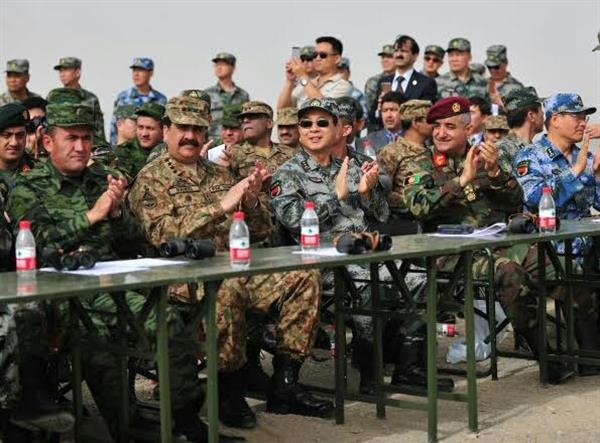 Afghanistan, China, Pakistan, and Tajikistan have set up a "Quadrilateral Cooperation and Coordination Mechanism" to jointly combat terrorism, further advancing security cooperation between the unlikely group of countries.

The chiefs of general staffs of the four armed forces met in Urumqi, China, on Wednsday and announced the formation of the mechanism, which will coordinate efforts on "study and judgment of counter terrorism situation, confirmation of clues, intelligence sharing, anti-terrorist capability building, joint anti-terrorist training and personnel training," according to a joint statement by the four sides.

Recall that when this idea was first publicly broached in March, Russian analysts reacted with some alarm, calling it a "Central Asian NATO" representing an unprecedentedly bold move by China into Central Asian security while excluding Russia. (Some Russian media then blamed this blog for fomenting discord between China and Russia by reporting on those analysts' comments.) Thus far there seems to be no further comment from the Russian government or press on this development.

The four representatives also observed a Chinese military exercise at Korla. "Exercise encompased a very effective neutralization of a terrorists' base in a remote mountainous region employing all the modern aerial and ground equipment and gadgets. [Chief of Army Staff of Pakistan] appreciated [the People's Liberation Army] troops for their skills and enhanced abilities to counter all categories of terrorism," according to a Pakistani military press release.

What exactly this all means is still pretty unclear. The four countries have very differing views of what constitutes the real threat of "terrorism" in the region. Pakistan's Dawn newspaper reported that "the QCCM was a Chinese initiative, but General Sharif actively contributed to its establishment."

Most intriguing from this blog's perspective is what Tajikistan's role in it is, especially given Moscow's obvious unease with it. There was no official comment from Dushanbe, but the website China Military Online quoted Tajikistan's deputy defense minister and chief of general staff Emomali Sobirzoda as saying that "the international and regional anti-terrorism situation is worrying and in order to solve regional security problems, all countries should work together and make good use of the 'quadrilateral mechanism' and other multilateral platforms, and that "Tajikistan believes that the 'quadrilateral mechanism' will play an important role in security cooperation among countries in the region and the maintenance of peace and stability."