Afghanistan: Dealing with the Trauma of War Onstage 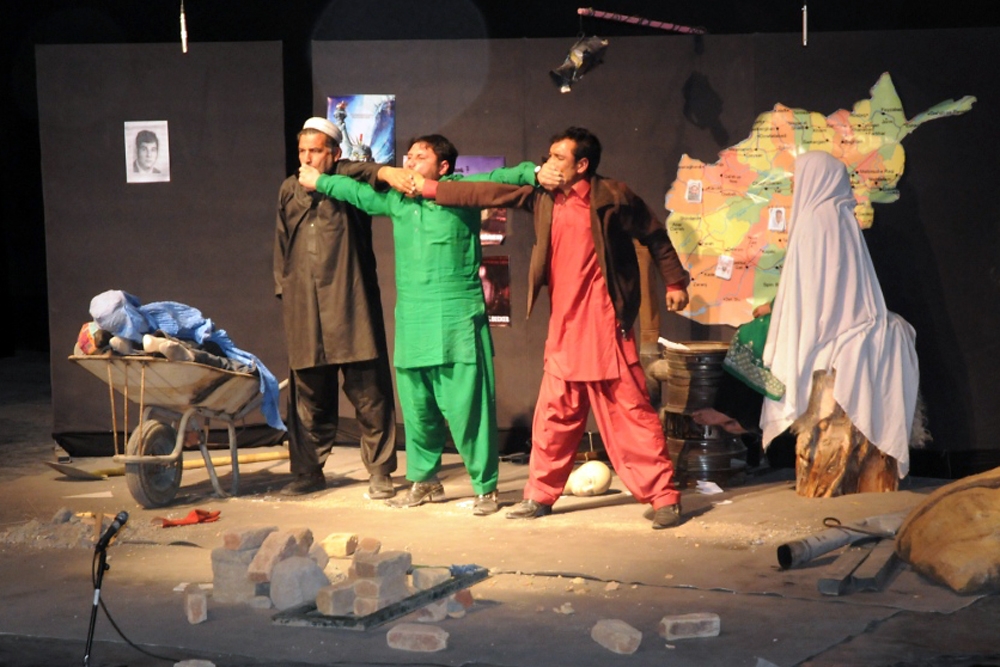 The stage is just a couple of large dining tables covered with white cotton sheets pushed together at one end of the room. The “commandant,” played by a young woman, has an elfin face and shy smile behind oversized dark glasses. On the surface, the scene appears lighthearted, but the emotions in the tiny room run deep: a group of Afghan women, scarred by the brutality of war, are using acting to address their pain.

“Every Afghan is a victim of the conflict,” says Neak Mohammed of the Afghan Human Rights and Democracy Organization (AHRDO), a non-governmental organization managing the theater project. Mohammed should know. His father was tortured and six of his brothers perished in the violence that has plagued Afghanistan since the 1979 Soviet occupation. Several of his siblings were “disappeared” by the various regimes that rotated in and out of power after the Red Army left Afghanistan in 1989.

Taking its cue from the “Theater of the Oppressed,” an initiative developed by Brazilian activist Augusto Boal, the Afghan participatory theater encourages actors and audience members alike to come to terms with their suffering by getting them to open up.

“The first time I talked [onstage] I cried so much I don’t know what I said,” says 25-year-old Shilla Qiam. “I realized here that it was not just me. Everyone has a story. Someone has lost a brother, a father, a sister.”

“I had never talked before,” said Qiam’s friend Waseema Amiri. “There are things you cannot talk about with your family because later on it is held against you. Here I could open up my mind and heart. I see these other sisters [female participants]. I didn’t even know the extent of the problems many women in the provinces have to face.”

The scene presented on the stage during a recent performance at AHRDO’s suburban Kabul office was one familiar to many in the audience: An underage girl was being forcibly married to a commander, an older man, by her father who hopes to get a good bride price. The girl protested, the father beat her and the mother was unable to intervene. When the scene froze onstage, audience members were invited to show how they would handle the situation.

One by one, women from the audience went onstage to role-play. One woman became the daughter. Another played the mother and another, the father. The mother offered to find a job so her daughter did not have to be married against her will; the daughter tried to soften the father through emotional arguments. The idea behind the exercise is that efforts to transform the situation onstage mirrors attempts to transform their own lives, the real situations the audience members have to deal with. “The audience gives the solution through which they can change their own lives,” explained AHRDO’s Mohammed.

“Afghans embraced this [concept] from the beginning,” said Hjalmar Jorge Joffre Eichhorn, an AHRDO founder and Bolivian-German theater activist who has developed acting-therapy programs in several countries. It is especially well suited for Afghanistan, which has a long tradition of oral expression. In addition, a theatrical venue offers a safe space for women to share stories that cultural stigmas, familial restrictions and the continuing conflict do not easily allow elsewhere. Just the act of narration is in itself an empowering act, said Eichhorn.

“The theater creates the safe space – both emotionally and physically – and brings people together. No one has listened to their stories before. Telling lifts a burden. Sometimes it is like a volcano erupting,” he added.

Outside the theater, little is done to help Afghans deal with the consequences of over three decades of conflict. Mental health facilities are virtually non-existent in Afghanistan, even though 60 percent of Afghans are estimated to suffer Post-Traumatic Stress Disorder, according to government data. An action plan on transitional justice that the government adopted in 2005 has not been implemented largely due to the resistance of powerful figures who fear the possibility of being called to account for war crimes. Moreover, the conflict’s stark ethnic divisions have prevented a common understanding that would be the starting point for any justice and healing process.

“Afghanistan is still a country in conflict and there is no agreement on the macro-narrative. It will take a lot of time until we are at a stage where we can agree and each group doesn’t feel it is the most victimized and that some other group is the worst oppressor,” said Sari Kuovo, the head of the Afghan program of International Center for Transitional Justice (ICTJ), one of the organizations the funds the theater project.

Law student Zahra Yagana has moderated many of the workshops. “In the beginning it was difficult. Some women would not take off their chadori [full burkha],” Yagana said. “Some would not speak. But day-by-day it gets better. We want the women to change their tears into energy.”

For Hadisa, a 20-year-old participant, this is already happening. “Before I thought there was no one to listen to the voice of women. Now I know we can raise our voices together. Our voice must be heard by decision-makers.”