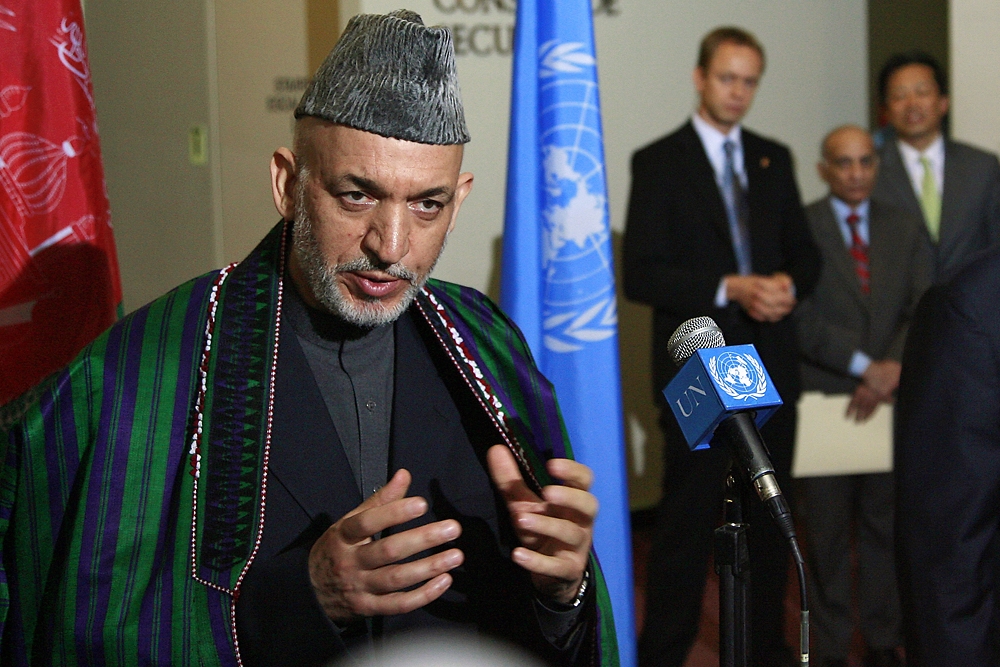 Almost lost amid an unfolding banking scandal in Afghanistan, a confrontation between President Hamid Karzai and the country’s parliament is coming to a head, threatening to paralyze the government at a crucial juncture.

Two recent developments concerning Afghanistan – the hastening of the US military drawdown and a financial scandal that has embroiled the former head of the country’s Central Bank – have helped obscure the seriousness of Karzai’s power play. And the banking scandal continues to capture local and international media attention: in the most recent twist, Afghan authorities issued an arrest warrant for the former Central Bank chief, Abdul Qadeer Fitrat, who earlier resigned his post and fled to the United States. Officials want to question Fitrat about possible malfeasance in connection with the collapse of Kabul Bank, a privately held institution.

The brewing executive-legislative conflict has the potential to be even more destabilizing for Kabul than the banking scandal. Afghan officials will be expected in the coming 18 months to assume greater responsibility for maintaining the country’s security. Yet the current trend suggests that the government is coming apart, rather than coming together.

At the heart of the dispute is a power struggle between parliament and Karzai's administration, in which the president's chief objective is  to weaken the legislative branch. Five months after he swore this second post-Taliban legislature in, and nine months after elections, Karzai authorized his own investigation into electoral fraud during last year’s polls, a process that led to the disqualification of a roughly a quarter of the deputies.

The decision of the Karzai-backed Special Election Tribunal, announced on June 23, is a direct challenge to the autonomous bodies that have constitutional mandates to oversee elections. The Independent Electoral Commission (IEC) and the Electoral Complaints Commission (ECC) both investigated and eliminated fraudulent votes after the polls last September. Karzai set up his own tribunal in December in a move that some critics see as unconstitutional.

“That nine months after the elections [and] eight months after the final results were announced by the IEC … MPs still can be changed by a body established by the president is a sign of the sad state of Afghan institutions,” said Thomas Ruttig of the Afghan Analysts Network, an independent research organization.

In Afghanistan’s party-less electoral system, the legislature – the first sat from 2005-2010 – has repeatedly acted to check Karzai, trying to prevent the president from amassing too much power in the executive branch.

While the political affiliations of the 62 of 249 deputies who have been tapped for disqualification do not form a significant pro- or anti-Karzai pattern, the implementation of the special tribunal’s action could provide a boost to executive authority by making the legislature more pliant, critics fear.

When announcing the Special Tribunal’s decision, judge Sidiqullah Haqiq said the body had been set up “in response to complaints” about the vote and had “functioned transparently.” But FEFA (the Free and Fair Election Foundation of Afghanistan), the country’s only independent election watchdog, said the process was characterized by “disorganization and lack of transparency.”

“After all the post-election chaos, no one will ever be able to say who really won or lost a seat in September. The legitimacy … of the ‘new democratic’ Afghanistan has been destroyed for good. It is a very bad example for the transition because the 2009-10 election cycle [which included controversial presidential polls in August 2009] was the first major political process handled by the Afghan government alone,” Ruttig told EurasiaNet.org.

The IEC has challenged the right of any other institution to announce final results of the elections, saying in a statement that it regards “the interference of any other organization in this issue as an explicit violation of the constitution and the Electoral Law.”

Waliullah Rahmani, director of the Kabul Center for Strategic Studies (KCSS), a think-tank, warned that the events pointed to a “constitutional crisis” that could evolve into “a political-security crisis.” If the president does not recall the tribunal, Afghanistan could witness “institutional weaknesses jeopardizing the legitimacy [of the government], which is destructive for the political future of Afghanistan and the survival of democracy in this country,” he told EurasiaNet.org.

MPs have grouped together in opposition to Karzai. On June 22, a group of over 100 legislators announced the formation of “The Coalition for Support of the Rule of Law,” promising to prevent “powerful individuals from usurping the rights of others.”

Parliament has appealed to United Nations Secretary General Ban Ki-moon to intervene. But Karzai has warned the international community to stay away. His spokesman Waheed Omar told reporters during a June 27 news conference that no external interference would be allowed and that the president was working to resolve the issue.

Despite earlier support for Afghanistan’ autonomous electoral institutions, it is unclear whether the international community can or has the political will to intervene. “Afghanistan's peaceful future lies in the building up of robust democratic institutions based on the rule of law and the clear respect for the separation of powers,” the UN’s Staffan de Mistura and Vygaudas Usackas, the European Union’s special representative to Afghanistan, said in separate statements.

“We cannot impose democracy from outside. It is up to Afghans to nurture the seeds of democracy that have been planted,” Usackas told EurasiaNet.org.

Whatever the outcome, the political maneuvering seems set to be highly contentious and debilitating. “The winner – again – is Karzai. But it is a Pyrrhic victory,” said Ruttig. “The losers are those Afghans who need a functioning state. Reestablishing the balance between the executive and the legislative would require new elections. But how should this work under Afghanistan’s current security conditions and the state its electoral institutions are in?"