Television preachers, renowned qawwali singers and prominent politicians with clandestine Sufi proclivities all flock to the garden to sample the ecstatic music. 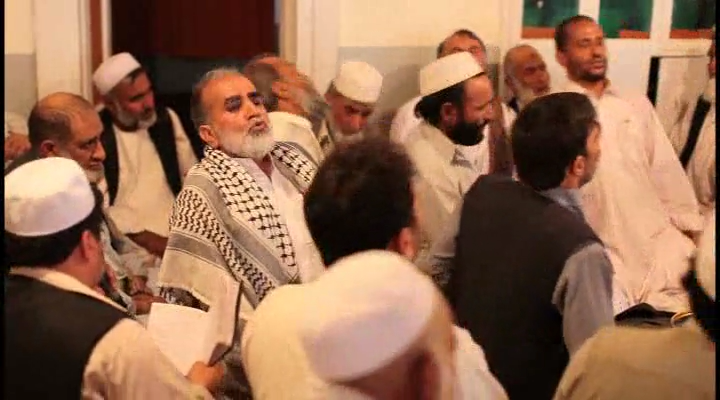 In a garden in Kabul’s Karte-Seh district, a group of Sufi musicians and poets gather for an evening of mystical melodies. Platters of rice pilau and fruit cover carpets spread across the lawn. This twice-weekly meeting is held at the home of a member of the ancient Chishti Sufi order who gathers together an all-male crème de la crème of Kabul’s Sufi society. Television preachers, renowned qawwali singers and prominent politicians with clandestine Sufi proclivities all flock to the garden to sample the ecstatic music.

Sufism is an ascetic spiritual tradition pioneered by Islam’s early warriors, who pushed outwards from the Arabian Peninsula into Central Asia and lived in all-male bands on the frontiers of the young empire. As they traveled, they adopted local traditions, even some that seemed to go against the mainstream tenants of Islam, including music. The Chishti blended qawwali music, a devotional melody that developed in south Asia, with the Persian whirling dervish dances, and acquired a reputation for being the most musical Sufi order.

As a result, they suffered more than other Afghan Sufis during the rule of the Taliban, who banned music and discouraged the gatherings. Whereas Sufi orders and pilgrimages to the shrines of mystics were long an integral part of Afghan devotional traditions, the Taliban’s harshly orthodox interpretation of Islam banned creative outlets, locking Afghan society into a half decade of spiritual austerity. Recently, Sufism has been on the defense in neighboring Pakistan, where local fundamentalists have killed hundreds in attacks on Sufi shrines.

Lutfullah Haqqparast was one of the few Sufi sheikhs who refused to submit to the Taliban’s restrictions on Sufism. The preacher – a suit-and-tie-wearing sociologist at a Kabul University who dons a white turban and green robe when officiating Sufi gatherings – was arrested for not caving to Taliban demands to stop his followers’ chanting. But when the Taliban tried to transfer him from Kabul to Kandahar, according to legend, there was such an outcry from religious elders that Haqqparast was released.

Today Haqqparast says Afghanistan needs a balance between Sufism’s mystical passion and the western rationality he teaches. “This traditional society needs Sufis to show it a more open-minded path but also the West to teach it logic,” he told Eurasianet.

Worship at the shrine is precarious, though. On June 17, for example, suicide bombers targeted a police station in the area and a gun battle raged for hours nearby – another reminder of how confident the Taliban are becoming.

The Afghan government, too, is feeling the pressure. To that end, President Hamid Karzai pays greater reverence to the Ulema Shura (Council of Clerics) whose orthodox Muslim views are often opposed to women’s rights, free speech or mystical Islam. On the other hand, Minister of Information and Culture Sayeed Makhdoom Raheem seeks to use Sufism as a moderating force against the Taliban even as he pressures Sufis to tone down their theatrical devotions ahead of reconciliation talks.

“Raheem is reviving Sufism and restoring khaneqahs [lodges] that encourage mysticism exactly because he believes that it can act as a tool to stop political Islam and the Taliban,” said Nasir Farahmand, a Kabul-based professor of philosophy who is an avowed secularist.

After taking in the qawwali music, Haqqparast gets up and, escorted by a group of disciples, heads to his modest car. A supporter drives him through old Kabul’s twisting lanes to Sufism’s less-effete face.

At the entrance to a charity home, disabled Sufis bedecked with necklaces and hennaed beards cluster around a gate opening onto what was once a basement jail. Amid clouds of hashish smoke, semiconscious men loll against the metal bars of former cells. Others file upstairs into a makeshift temple of interconnected rooms. It is nearly 3 a.m., but the floor is packed with ecstatic dervishes listening to musicians on a raised dais.