After Azerbaijan Shoots Down Helicopter, How Will Armenia Respond? 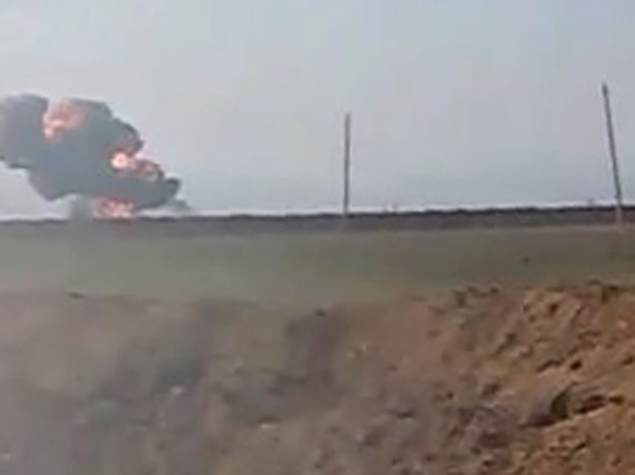 An Armenian Mi-24 helicopter hit by Azerbaijani fire November 12, in a photo released by the Azerbaijan Ministry of Defense.

After Azerbaijani armed forces shot down an Armenian helicopter, probably the most significant military incident between the two sides in two decades, Armenian military and political figures have promised to retaliate.

The warnings of retaliation came almost immediately. "The consequences of this unprecedented escalation will be very painful for the Azerbaijani side," a spokesman for the Armenian Ministry of Defense said that day.

One small act of retaliation already took place: on November 13, the day after the helicopter was shot down and Azerbaijan declared the airspace over Karabakh "closed," Armenian President Serzh Sargsyan flew there anyway on a helicopter.

Karabakh's airspace "really is closed, but only to the Azerbaijan air forces, and they should have had the courage to finish the sentence," David Babayan, an adviser to the territory's de facto president, told RFE/RL.

A stronger retaliation is surely coming, but what? Emil Sanamyan, the editor of the newspaper Armenian Reporter who closely follows military developments in the region, told The Bug Pit that it would likely be a proportionate response, i.e. shooting down an Azerbaijani helicopter also flying close to the line of contact. Those "show-off" flights have been common occurences over the past few years for both sides, he said.

These sort of tit-for-tat responses have been the norm in other recent escalations, Sanamyan said. "The 'easy' option would be to hit the position from where the missile was launched," he said. "But of course thats not equivalent to losing a helicopter with three trained pilots. So they will bide their time until an Azerbaijan aircraft shows up within range."

Meanwhile, as solid information about the exact circumstances of the shootdown remained scarce, the international reactions tended toward the usual "both sides" formulations. The Minsk Group of the OSCE issued a statement expressing "very serious concern about the downing of a helicopter near the Line of Contact and the recent violence. We regret the loss of life and express our condolences to the families...  We strongly appeal to the sides to avoid steps that would escalate tension along the Line of Contact and Armenia-Azerbaijan border."

Similarly, NATO's special representative for the Caucasus and Central Asia, James Appathurai, said: "Whatever the circumstances of the incident, both sides should remain calm and pursue a diplomatic resolution."

One could detect only a hint of blame directed at Azerbaijan from the Collective Security Treaty Organization, of which Armenia is a member. "On November 12 in Karabakh a helicopter carrying out a training flight was destroyed by the Azerbaijani side.... The destruction of the helicopter is a dangerous manifestation of violence. The threat of a new round of escalation of the conflict has arisen."