After Bolton takes aim at Russia and Iran, is Armenia the collateral damage?

The senior American official made a number of controversial statements in Yerevan that vexed both his hosts and the Kremlin. 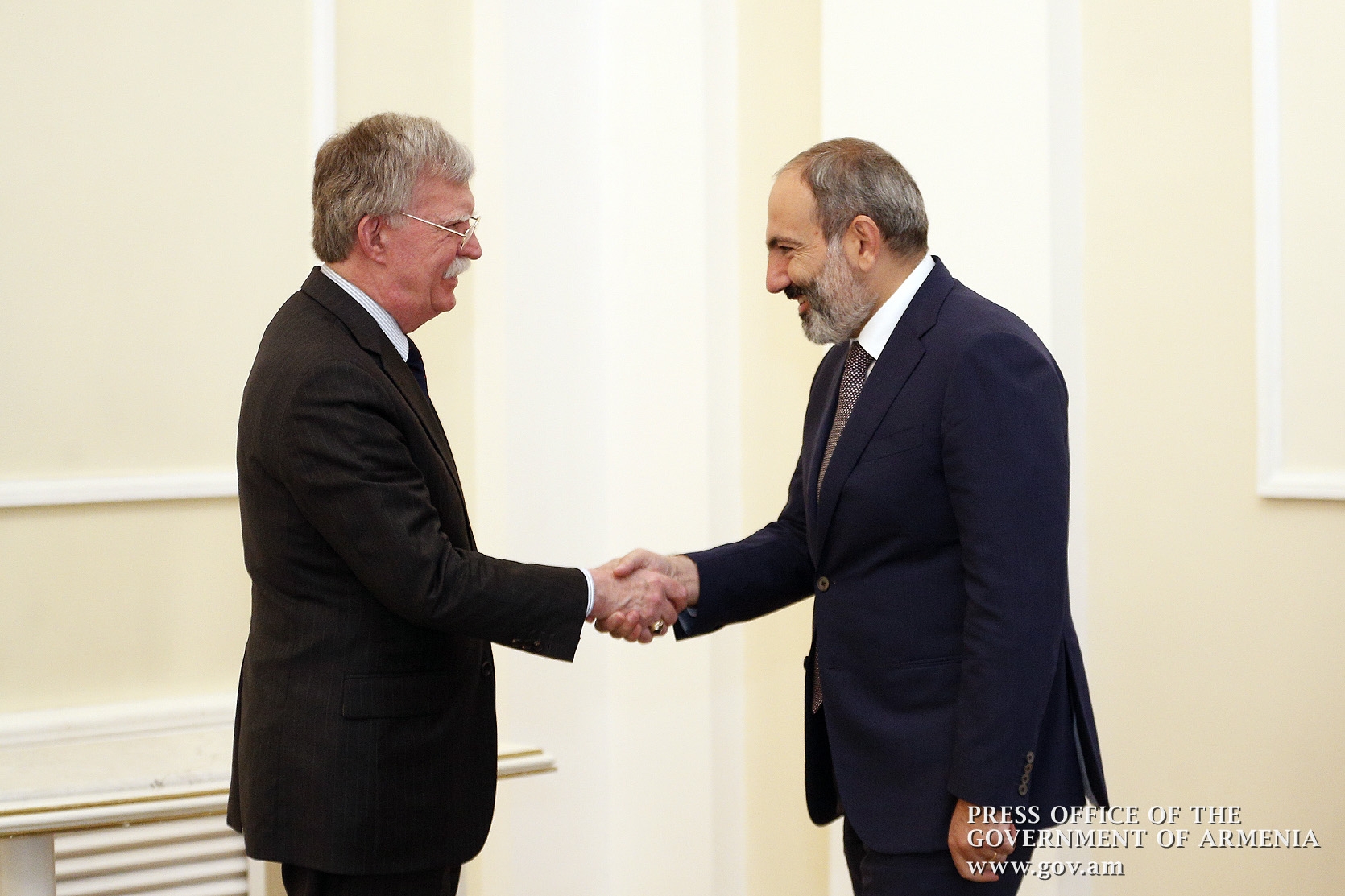 Befitting his bull-in-a-china-shop reputation, John Bolton's whirlwind tour of the Caucasus left a trail of geopolitical wreckage that his hosts are still trying to pick up even after Bolton himself is back in Washington.

As expected, the visit of Bolton, the U.S. National Security Adviser, focused on getting the states of the South Caucasus – Georgia, Armenia, and Azerbaijan – on board with Washington's efforts to isolate Iran.

Bolton visited all three countries, but his public statements in Tbilisi and Baku were more or less pro forma for an American official visiting the Caucasus. It was in Yerevan where he repeatedly made provocative comments that vexed his hosts, and where the fallout from his visit continues.

Armenia's position vis-à-vis Iran is especially delicate, as the ongoing conflict with Azerbaijan has resulted in its borders to the east (with Azerbaijan) and west (with Turkey) being closed. So Armenia relies on its southern border with Iran as a key outlet.

In the past, the U.S. has tended to look the other way at Armenia-Iran ties, even as it pursues broad sanctions against Tehran, since it understands that Armenia has few other options. Bolton, though, suggested that that lenience may be coming to an end.

As the U.S. ratchets up pressure on Iran, the Armenian-Iranian border is “going to be a significant issue,” Bolton told the Armenian service of Radio Free Europe/Radio Liberty. “We are going to squeeze Iran because we think their behavior in the Middle East and, really globally, is malign and needs to be changed.”

Bolton acknowledged that he understood why Armenia needed Iran, but said that the solution was to end the conflict with Azerbaijan.

Bolton told RFE/RL that “current circumstances highlight” the importance of Armenia and Azerbaijan “finding a mutually satisfactory agreement to the Nagorno-Karabakh issue,” referring to the territory over which the two countries are fighting. “Once that happened, then the Armenian-Azerbaijani border would open,” Bolton said. “The Turkish border, I believe, would almost certainly open.”

That is all technically true, but the notion that Yerevan would orient its relations toward Azerbaijan – which it regards as an existential threat – around the U.S.'s policy of isolating Iran fell flat among Armenians.

“John Bolton, or anyone for that matter, cannot speak on my behalf,” Armenian Prime Minister Nikol Pashinyan told a news conference following Bolton's visit. “They are moving forward with the logic that they have some kind of ownership of the Karabakh issue, and now they are attempting to sell it to me, without asking my opinion.”

Bolton's dabbling in Karabakh diplomacy followed a controversial interview given the week before by the outgoing U.S. ambassador, Richard Mills, in which the envoy said it was “disturbing” how few Armenians were willing to make concessions to Azerbaijan over Nagorno-Karabakh. “The harsh reality is that any settlement is going to require the return of some portion of the occupied territories,” Mills told the news site EVN Report.

While that is also technically true, the combined effect of the Mills and Bolton statements added to a sense in Yerevan that the new Pashinyan government's tentative steps toward the West are being repaid by a conspicuous lack of sympathy toward Yerevan's position. On top of that, the Trump administration has evinced little interest in the Caucasus – even by the low standards of the U.S. – and little indication that Washington has anything to offer Armenia in exchange for the dramatic moves Bolton proposed.

“Not since the failed and dangerous Turkey-Armenia Protocols has the United States been so keen on pressuring Armenia to adapt to American priorities in the region,” wrote the Armenian-American news site Asbarez in a commentary on Bolton's visit.

That sense was seized on by members of the former regime. In a Facebook post, former defense minister Vigen Sargsyan criticized “Pashinyan's American fiasco” and complained that “Bolton not only repeated Azerbaijan's thesis that Armenia is to blame for the blockade [of the Armenia-Azerbaijan border], but also justified Turkey's closure of its border with Armenia.”

While in the Caucasus, Bolton also mooted the prospect of the U.S. reversing its policy of not selling arms to Armenia or Azerbaijan. That would almost certainly benefit Azerbaijan more, as Baku has far more money with which to buy American weapons, which are generally much more expensive than the Russian arms on which both Armenia and Azerbaijan largely rely.

Nevertheless, the offer was presented as a sort of carrot for Yerevan. “As I said to the prime minister, if it’s a question of buying Russian military equipment versus buying U.S. military equipment, we’d prefer the latter,” Bolton told RFE/RL. “We think our equipment is better than the Russians’ anyway.”

Bolton also targeted Armenia's recent announcement that it would send a small team of sappers to help Russia in its demining efforts in Syria. “It would be a mistake for anybody else to get involved militarily in the Syrian conflict at the moment,” Bolton told a news conference in Yerevan. “There are already … seven or eight different combatant sides. To get involved with any one of them for any other country would be a mistake,” he said.

The Kremlin, naturally, did not take kindly to Bolton's attempts to drive a wedge between Armenia and Russia; Yerevan is Moscow's closest ally in the Caucasus and Armenia depends heavily on subsidized Russian weaponry.

In a sharply worded statement issued after Bolton left, the Russian Ministry of Foreign Affairs seized on the American's reference to Armenia not needing to be constrained by “historical antecedents” in its foreign relations. Bolton “demanded openly that Armenia renounce historical clichés in its international relations and hardly bothered to conceal the fact that this implied Armenia’s traditional friendship with Russia,” the MFA said, calling the demand “impudent.”

The statement continued: “Incidentally, not all of John Bolton’s statements in Yerevan deserve to be criticized. In his October 25 interview to Radio Liberty, he made a wonderful comment: 'I think that’s really fundamental to Armenia exercising its full sovereignty and not being dependent on or subject to excessive foreign influence.' It would be good if John Bolton thinks over the meaning of his own words.”