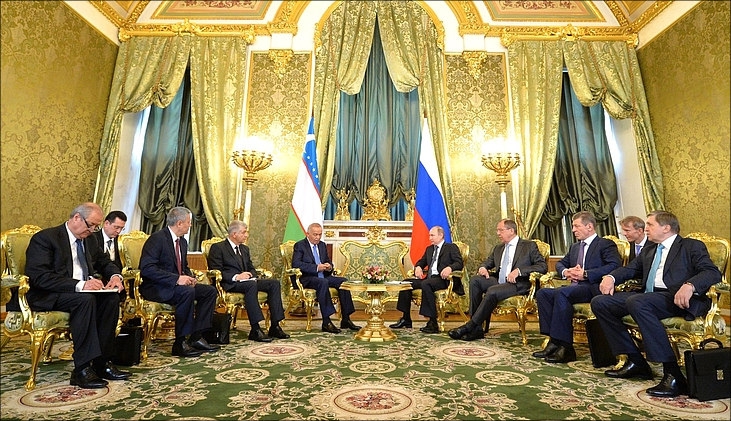 The presidents of Russia and Uzbekistan met in Moscow with security high on the agenda. And while the two agreed on the need to cooperate to deal with the deteriorating situation Afghanistan, they publicly disagreed on how to do it.

President Islam Karimov's visit to Moscow was closely watched, given that he rarely leaves the country and that his increasingly isolationist foreign policy has long been a thorn in Russia's side.

But in Karimov's meeting with his Russian counterpart, Vladimir Putin, both sides agreed that they needed to work together in Afghanistan. "In our discussion we were primarily concerned about priority aspects of our bilateral relations, and first of all the situation taking shape in Central Asia," Karimov said in a joint appearance after the meeting. "Above all, this concerns, of course, the situation in neighbouring Afghanistan, [which] could create a serious threat of the instability spilling over to neighbouring countries and regions."

And Karimov argued that Russia needed to be part of the solution in Afghanistan. "Everyone knows geography, and knows that Central Asia’s ties with Russia go back centuries, if not millennia. We clearly feel Russia’s interest in Central Asia, and we agree with this," he said.

But the two differed on strategy. In particular, while Putin praised the importance of the Shanghai Cooperation Organization (and has repeatedly called for it to play a bigger role in Afghanistan), Karimov, speaking after him, pointedly argued that the SCO should not be involved in Afghanistan:

Considering the complicated situation in Afghanistan and lessons of recent history, it is essential to prevent the SCO from getting involved in the military and political developments in that country. Such involvement might be regarded by Kabul, all of Afghanistan and far beyond it –practically by the entire world – as SCO member-states’ preparedness (we are both SCO states) to assume full responsibility for the settlement of the Afghan crisis. It would be utterly wrong to shift the Afghan issue onto someone else.

Karimov didn't explain his objection more than that, but he is believed to be wary of the group's political nature, and wants it to focus more on economic issues.

Another conflict, albeit in this case an unspoken one, was Uzbekistan's refusal to take part in the Russian-led military bloc, the Collective Security Treaty Organization. Uzbekistan suspended its CSTO membership in 2012 and has shown no interest in rejoining. Uzbekistan's absence, however, represents a huge stumbling block to Russia's ambition of making the group the main actor in Central Asian security.

Ahead of Karimov's visit, the chair of the Russian Duma committee on international affairs, Aleksey Pushkov, said that "sooner or later, Uzbekistan will return to the CSTO." CSTO General Secretary Nikolay Bordyuzha added: "I think Uzbekistan would only gain by cooperation, and even better from working in the organization. Uzbekistan is facing the same problems as the rest of our states, but it would be better to solve these problems collectively.... Still, to my deep regret, I see no such movement in the leadership of Uzbekistan."