“It was the pandemic that hit the economy hard, not the lockdown itself.” 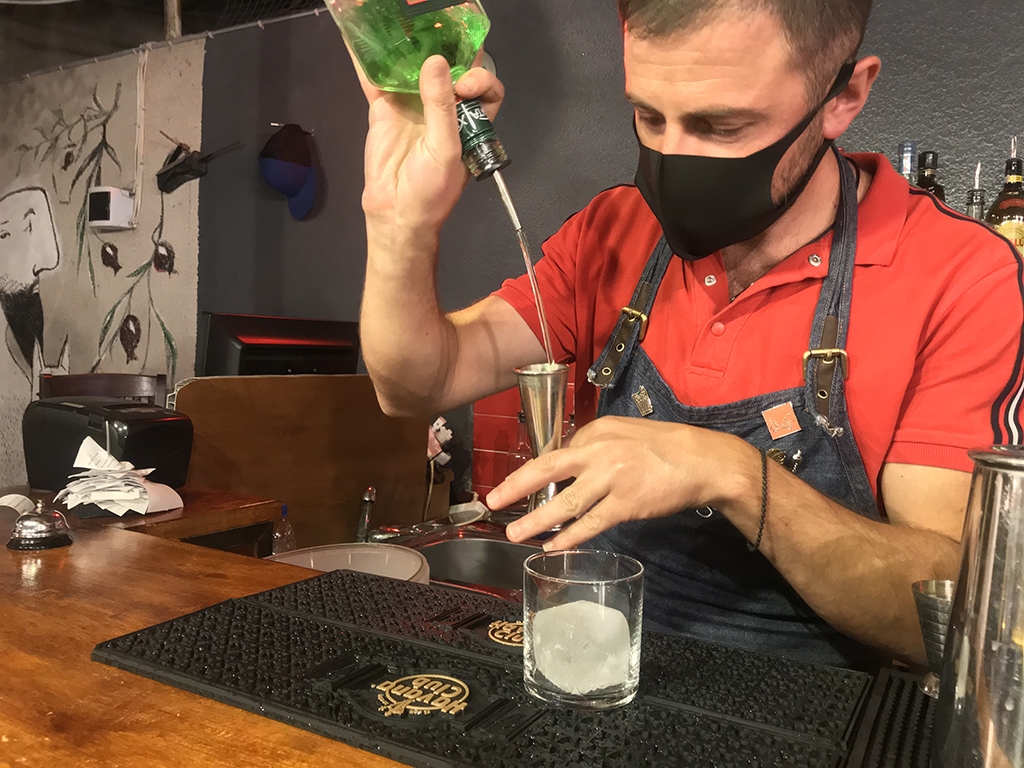 Customers aren’t spending like they used to at the reopened Calumet bar in central Yerevan. (photos: Ani Mejlumyan)

On a normal evening, the Calumet bar in central Yerevan has a packed crowd of hipster locals, repatriated Armenians, and tourists dancing to modern versions of classic Armenian folk tunes. After midnight on weekends, it’s so crowded the Armenian phrase applies: “If you drop a needle it won’t pass through.”

These days, it’s a very different scene. On a recent visit, there were fewer than 10 customers. The music was soft, and several of the clientele were playing checkers or backgammon.

Customers are afraid of the closed space – the bar is underground with no windows – and in any case aren’t spending much. “Indoor places frighten people,” said Sevag Davidian, a co-owner. On top of that, he told Eurasianet, “customers can’t spend as much as they used to. Almost nobody is ordering expensive drinks,” opting for $1-2 beers rather than the $8 Long Island iced teas. Overall, business is down 80 percent, Davidian said.

When Armenia ended its coronavirus lockdown in early May, even as the epidemic’s spread was accelerating, the government cited the need to keep the economy going and let people get back to work. For a time after reopening, Armenia had one of the world’s worst infection rates. And nearly three months on, the economy has continued to suffer.

Nevertheless, many Armenians believe the government had no choice. “We have enough information now, including the reactions of people and businesses to these kind of [lockdown] measures, to say that fully shutting down the economy is not the most effective measure,” Artak Manukyan, an economist and a member of parliament for the ruling My Step coalition, told Eurasianet.

For the most part, Armenians have supported the government’s strategy. Ninety percent of Armenians are worried about the coronavirus’s impact on the economy, with 71 percent “very concerned,” according to a newly released poll by the International Republican Institute. At the same time, 71 percent of those polled were overall satisfied with the government’s response.

Some economists disagree. “Lifting the lockdown in May was a mistake,” said Hrant Mikaelian, an economist at the Yerevan think tank Caucasus Institute. Mikaelian draws a comparison with neighboring Georgia, which imposed a stricter lockdown and kept it in place for much longer than did Armenia.

While Georgia has had a significantly lower spread of the disease – 1,160 total infections and 17 deaths, compared to more than 38,000 infections and 728 deaths in Armenia – its economy performed roughly the same. In May, according to government data, Armenia’s economy contracted 12.8 percent compared with May 2019, while Georgia’s contracted 13.5 percent. “Georgia’s economic decline is very similar to what we see in Armenia,” Mikaelian told Eurasianet. “But compared to Armenia, Georgia saved hundreds of lives.”

In June, Armenia’s economy declined 7.5 percent compared with the same month a year before; the comparable statistics for Georgia are not yet available, but it was in late May and early June that Georgia ended its lockdown. “From what we could observe in May, the absence of the lockdown did not save the Armenian economy. It was the pandemic that hit the economy hard, not the lockdown itself,” Mikaelian said.

In its July update on Armenia, the World Bank also suggested that the ongoing spread of the disease could continue to slow the economy: “The recovery is likely to remain sluggish. The lifting of most mobility restrictions was accompanied by a strong increase in new infections (on average 550 new cases in the first week of July). This remains a barrier to economic recovery.”

Armenia’s service sector, including bars and restaurants, has led the slowdown.

Many small business have been able to stay afloat with the help of a variety of government stimulus efforts. Kond House, another trendy bar in Yerevan, got an interest-free loan and its employees a one-time payment that helped it survive the difficult spring, said owner Narek Bakhtamyan. Now, helped by a large outdoor space and a clientele of mostly locals, the bar is relatively thriving, he said.

“It was definitely the right decision to open up in May,” Bakhtamyan told Eurasianet. “There was a time at the beginning of the pandemic when even if we were allowed to stay open no one would have come, everything was confusing. During the one-and-a-half months of lockdown, they managed to strengthen the health care system and opened up the economy as quickly as they could.”

But Davidian, of Calumet, said the government aid he got wasn’t enough and that there really was no choice but to reopen his basement bar, given what he saw as the futility of the coronavirus fight and the ineffectiveness of the bailout.

“If the lockdown had been properly implemented in the beginning, the situation would be different, but it wasn’t. By May it made no sense to keep the economy closed, the damage was already done,” he said. “And if the government support was more comprehensive, businesses could handle a longer lockdown, but in this case it wasn’t.”

Economic projections around the world have become progressively more pessimistic as time has passed, including in Armenia. “Before, we were projecting a 2 percent decline [for 2020], now the central bank says it will be 4 percent,” Manukyan of My Step said.

To help soften the blow from the service sector decline, the government has been spending on infrastructure to try to jump start the economy: Manukyan said that the government has started 100 new construction projects. “It’s clear that the 2020 decline will linger, affecting the economy for two more years,” he said. “In 2023 there is a chance to fully return to normal.”