Kazakhstan is no longer a safe haven for asylum seekers from China. 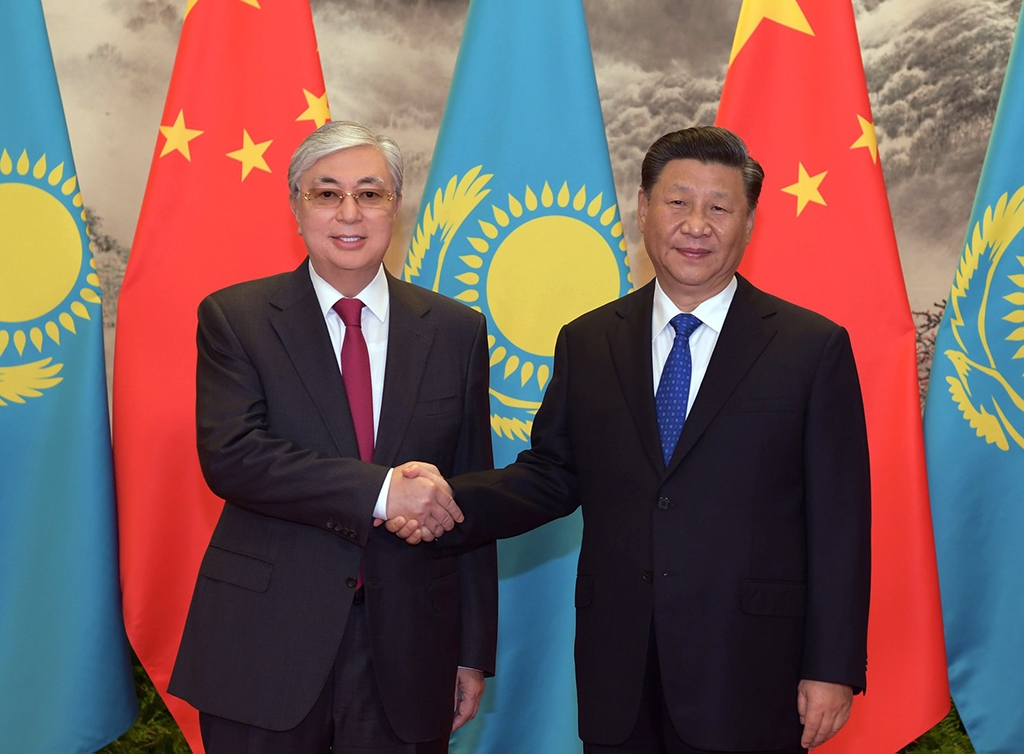 Kazakhstan under Kassym-Jomart Tokayev is cracking down on activists who could embarrass China. (government handout)

When Xinjiang-born asylum-seeker Kaisha Akan went to the police in Almaty to report an assault that left her with bruises on her face and head, she got little sympathy.

“They told her maybe she had done it to herself,” Akan’s lawyer Shinkuat Baizhanov told Eurasianet. “They said that perhaps she wanted [international sympathy] to move to Switzerland […] They didn’t want to listen.”

The assault occurred on January 21, as Akan was returning home from doing grocery shopping.

That same evening, another asylum-seeker, Murager Alimuly, was assaulted by a knifeman in Kazakhstan’s capital, Nur-Sultan, more than 1,000 kilometers away.

Akan and Alimuly were last year convicted on charges of entering the country illegally from China’s Xinjiang province. They said they were fleeing Beijing’s crackdown in a region where hundreds of thousands of Turkic and Muslim minority citizens have been incarcerated on arbitrary pretexts since 2016.

Kazakhstan has typically been highly circumspect about such cases, terrified as it is of offending its powerful eastern neighbor. So it was a pleasant surprise for Akan and Alimuly, along with two other ethnic Kazakh Xinjiang natives, when the Interior Ministry decided to offer them all temporary asylum last fall.

But the assaults and a new, forceful government crackdown on activists working on Xinjiang issues indicate another change of tack.

Baizhanov, who is also representing Alimuly, is sure both attacks were politically motivated. In both incidents, the perpetrators, none of whom have been apprehended, made no attempt to steal personal effects.

It was a warning to refrain from further talk of state repression in China, Baizhanov believes.

One video recently uploaded to the internet by Akan featured allegations of sexual abuse in a Xinjiang internment camp – a similar account to those shared by Uyghur former camp detainees recently interviewed by the BBC.

In 2018, Kazakhstan emerged as something of an unlikely hub for foreign reporters in search of details on the unfolding humanitarian crisis in Xinjiang. Campaigners like Serikzhan Bilash, a garrulous critic of Beijing, seized eagerly upon that attention.

It did not take long for authorities in Nur-Sultan to grow nervous. By March 2019, Bilash had been flung behind bars. Atajurt, a Bilash-founded group that has recorded and help spread the word of thousands of oral testimonies on abuses in Xinjiang, was serially denied registration.

China may well ultimately be behind such pressure campaigns.

Last February, Baibolat Kunbolat, a naturalized Kazakh national, staged a one-man protest outside the Chinese consulate in Almaty. The demonstration had a single aim: to secure freedom for his brother Baimurat Nauryzbek, who has been sentenced to 10 years in prison in Xinjiang on charges of purportedly inciting racial hatred in online posts.

Kunbolat told Eurasianet that a consulate employee called Gu Ming threatened “to engage with the Kazakhstan government to have action” taken against him. Kunbolat alleges Gu then warned him that he was harming his brother’s chances of rehabilitation by serving as a pawn for foreign governments.

Sure enough, Almaty municipal officials told Kunbolat that he would be arrested if he repeated the stunt.

Ignoring their warnings, Kunbolat mounted another similar protest earlier this month and earned a 10-day jail term for his troubles.

Shortly thereafter, Kunbolat’s mother, Zauatkhan Tursyn, herself began picketing the consulate to demand the release of her sons.

“China incarcerated one of my sons, Kazakhstan jailed another,” RFE/RL’s Kazakh service quoted Tursyn as saying. Tursyn and fellow picketers were eventually chased away by police.

These protests, which are now taking place several times a week, look like a desperate last stand.

International media interest in the plight of Xinjiang Kazakhs has waned. Bekzat Maksutkhan, who runs the remnants of Atajurt, laments the difficulty of keeping the struggle alive in the teeth of so much intimidation. The group no longer even has an office.

“The people who helped us financially were threatened by both national security and members of Chinese soft powers,” Maksutkhan told Eurasianet in an English-language interview, alluding to pro-Beijing cultural and economic lobby groups.

Bilash, who was eventually released after much protest from his followers, has left Kazakhstan. He believes new criminal charges await him if he returns.

Even Bilash’s initial new base-in-exile in Turkey, where he moved together with his family, does not feel altogether safe. He began to grow uneasy after a contact in Kazakhstan told him that authorities there had asked Ankara to deport him. He admits he has not been able to confirm this claim independently, however.

“Around that time, many Kazakhs whom I didn’t know began calling me, thanking me for my work, inviting me to restaurants. Some even found my house,” Bilash told Eurasianet. “I told them I did not want to meet them.”

Now he is in the United States, where he aims to open an Atajurt office.

“I am grateful to Turkey for not deporting me, but I don’t think it is a good place for me and my organization. I hope America will help us now,” he said.