The mood in Baku is triumphal but it’s heavy and vengeful rather than joyous. (all photos by Paul Benjamin Osterlund)

On the bottom left corner of my Azerbaijan Airlines ticket from Istanbul to Baku is printed the phrase “KARABAKH IS AZERBAIJAN.” It is the first of hundreds of times I will see this phrase over the next few days: on screens in the Baku airport, billboards in the city center, storefronts of countless shops.

I arrived with a group of journalists on a sponsored press trip to Azerbaijan in the afterglow of the country’s victory over Armenia, in which Baku managed to take back nearly all the territories it had lost to Armenians in the first war over Nagorno-Karabakh in the 1990s.

The mood in the city a month after the victory is triumphant, but it is a heavy, vengeful sense of triumph rather than a celebratory, joyous one. Hotels and stadiums sparkle with the blue, red and green of Azerbaijan's flag, photos of President Ilham Aliyev with a raised, closed fist are everywhere, framed by the caption: “Karabakh is ours! Karabakh is Azerbaijan!” Due to coronavirus-related restrictions, nearly everything except for markets and takeout coffeeshops is closed, and the streets are mostly empty.

We arrive on the same day that another visitor from Turkey, President Recep Tayyip Erdoğan, is the guest of honor at a victory parade through the center of Baku. But the parade starts in the afternoon and daylight is limited, so we skip it and hit the road.

Our first stop is Füzuli, and we are told that we are the first foreign journalists to see the territory after it was retaken in the war, following 27 years of Armenian occupation that left it devastated. The city is still deserted but an Azerbaijani flag has been newly placed atop what was once a handsome building that served as the headquarters of a newspaper.

A Soviet-era cultural center lies in ruin, empty boxes of ammunition litter the ground. A mosque stands covered in graffiti, several bales of hay inside. Nearby, an undetonated Smerch rocket is halfway buried into the ground. We head back east, along the road straddling the Iranian border, to the town of Imishli to spend the night. 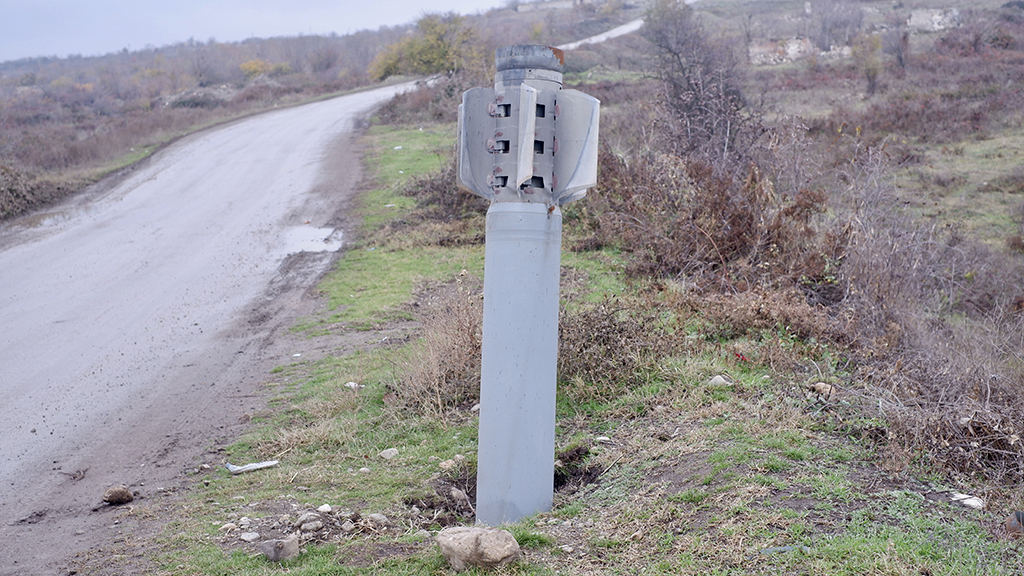 The next morning we make our way back into the newly rewon territory, to the ruined town of Aghdam. We are told to not venture off the road, as the adjacent land is dotted with mines. The only other people in town are members of the government’s land mine removal agency, at work locating the mines and conducting controlled blasts. We see one such explosion, and despite it being several hundred meters away the impact is nevertheless startling, like a sudden burst of wind that threatens to knock you off your feet. The only structure in Aghdam that has not been razed to the ground is the Juma Mosque, built in 1868. Its two elegant minarets are still standing, and we are told that Armenian forces used them as military positions while the mosque itself was used as a barn. Climbing up the winding, narrow staircase in one minaret and surveying the town gives a sense of just how vast the destruction of this city has been. Even long after the war ended, the destruction of the city continued as Armenians scavenged the ruins for anything usable.

The weather is cold and the wind biting. A group of soldiers gather around a barrel fire while a family of eight cats huddles near an outdoor stove used to brew tea.

For now, civilians are banned from entry due to the danger of unexploded ordnance. But our minders from the Heydar Aliyev Foundation arrange for us to interview three former Aghdam residents, all in their 50s, who fled the town when Armenian forces captured it in 1993. They are among the more than 600,000 ethnic Azerbaijanis who were forced to flee their homes in that war, and the victory has made it possible to imagine their return to their former homes.

They all thanked Aliyev and Erdoğan, tell us how their old Armenian neighbors “stabbed them in the back,” and voice their hopes for the reconstruction and resettlement of the crumbled town. Their deep grief is visibly palpable, and one man, Mahammad Mammadov Nazaroglu, is unable to hold back tears as he described his former life in Aghdam. On our way back to Baku, we drop them off in the nearby small town where they now live. 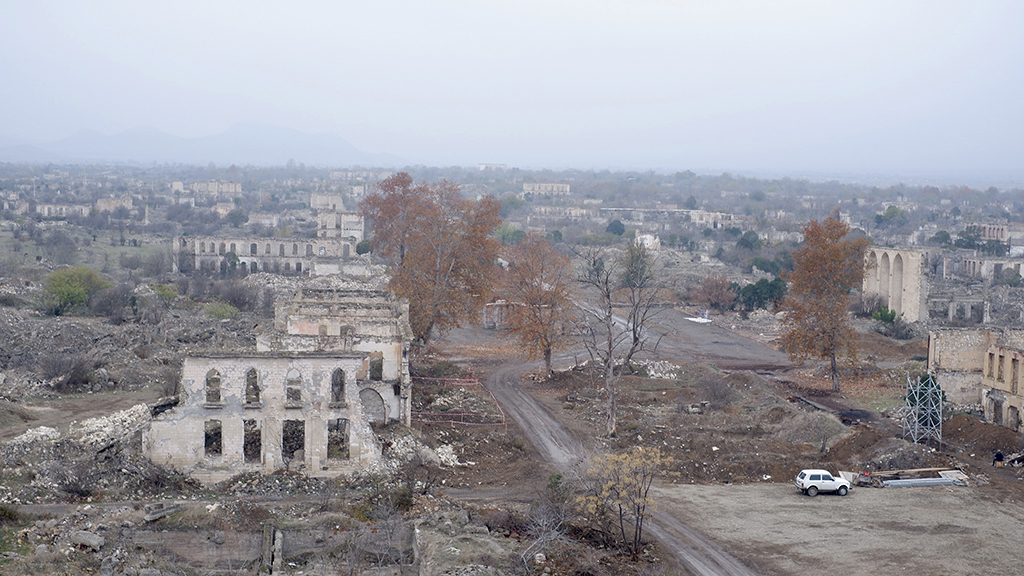 We had been promised a question-and-answer session with Aliyev himself, but that doesn’t happen. Instead, we meet Hikmet Hajiyev, the president’s chief foreign policy adviser. Since the war, Aliyev has been appearing regularly in military fatigues, photographed with a clenched fist and denouncing “Armenian fascism.” Hajiyev, meanwhile, has been presenting a more conciliatory tone to foreign audiences. I ask him how Baku intends to move forward in its dialogue with Yerevan given the heavy nationalist atmosphere we have been seeing.

“You can win a war but you can lose in peace,” he replies. “It's always good to win a war and in the meantime to win a peace. Our strategy is now to win a peace, to make sure that we are ensuring long-term, sustainable peace and security in the region for the benefit of Azerbaijan and for the benefit of Armenia and Armenian people. We would like to change this paradigm.” More specifically, he expressed hope that the Armenia-Turkey border – closed since 1993 – would again reopen.

With the little free time we have before our departure, I wander Baku’s streets, still handsome in spite of the frigid weather and the coronavirus-induced emptiness. I check out the unique, modernist Synagogue of the Ashkenazi Jews and the nearby Azerbaijan State Academic Opera and Ballet Theatre, a stunning 1911 building designed, like many of Baku’s gems from this era, by Armenian architect Nikolai Bayev.

This cosmopolitan past stands in striking contrast to the aggressive nationalism on display throughout Azerbaijan today, and the peak levels of polarization between Armenians and Azerbaijanis following the war. I leave Baku thinking that those days are farther away than ever.