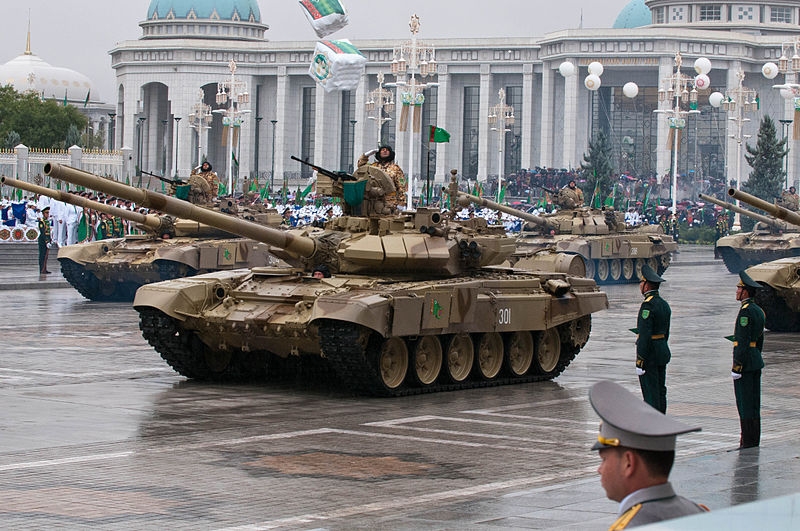 A T-90 tank on display on a military parade in Ashgabat, Turkmenistan. (photo: Wikimedia Commons)

Russia is offering Azerbaijan another 100 tanks, on top of 100 that it has bought over the last three years, in a move that will surely have Armenians asking what more they need to do to prove their loyalty to Moscow.

Speaking at Kazakhstan's KADEX defense expo in Astana, Konstantin Biryulin, the deputy director of Russia's Federal Service for Military-Technical Cooperation told Russian news agency ITAR-TASS that Azerbaijan's order of 100 T-90S tanks had been completed a month ago. And he added that Azerbaijan has an "option" to buy another 100, but that the option hasn't yet been exercised.

News last summer that Russia completed a $1 billion arms deal with Azerbaijan (which included those 100 tanks) prompted outrage in Yerevan. Armenia has been a loyal ally of Russia, and so selling such a large number of weapons to its enemy seemed like a betrayal.

But that was when Armenia was flirting with signing an Association Agreement with the European Union. Not long after the arms deal was announced, Armenia announced that it had changed its mind about the EU and would instead be joining the Russia-led Customs Union. Now Armenia is scheduled to formally join the Customs Union in June. So another big arms sale to Azerbaijan would seem like an even bigger betrayal.