Ahead of key summit, Armenians of Karabakh rally against Azerbaijani control

Tens of thousands gathered the day before the leaders of Armenia, Azerbaijan, and Russia were meeting to work on a peace agreement that many Armenians oppose. 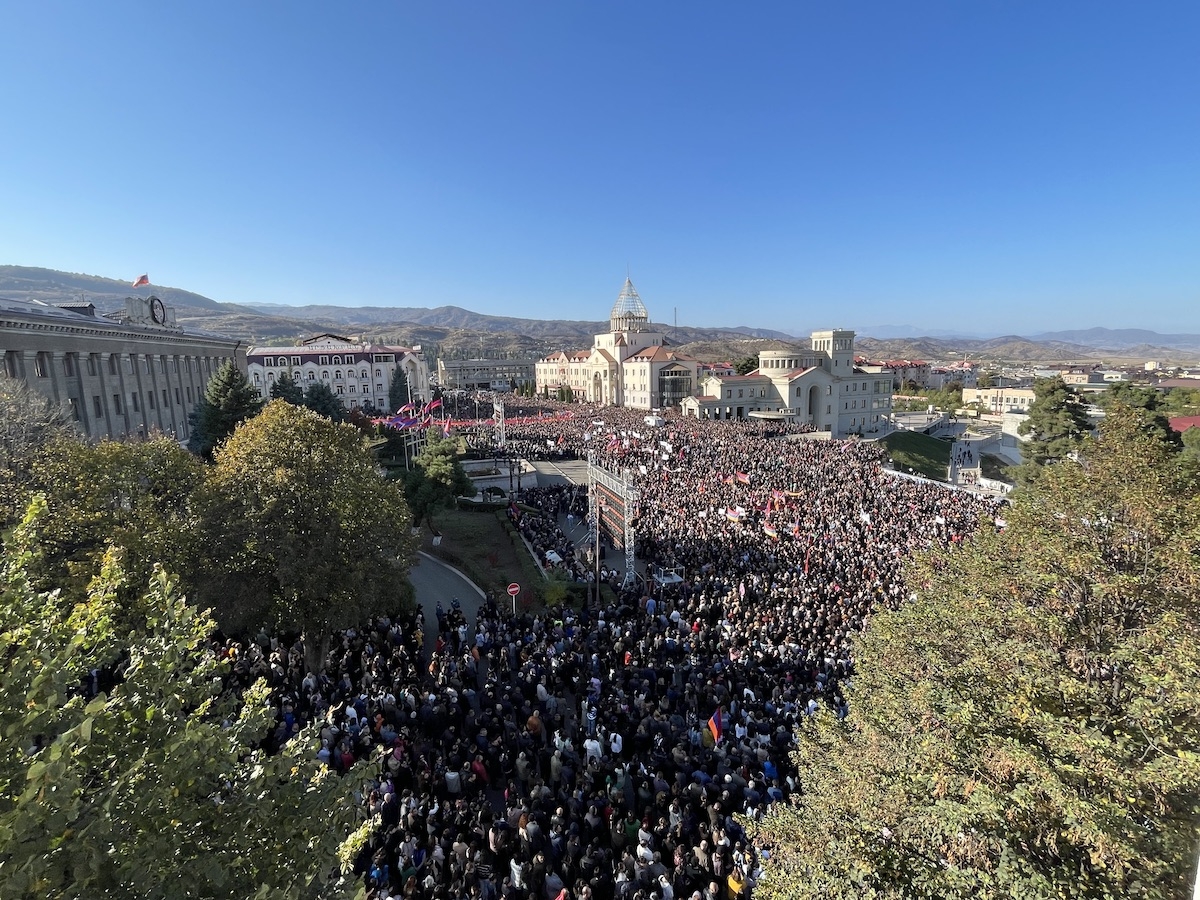 Residents of Nagorno-Karabakh gathered for a massive rally to protest against the possibility that the Armenian government will cede control of the region to Azerbaijan.

A crowd officially estimated at 40,000 came together in the main square of Stepanakert, the de facto capital of Nagorno-Karabakh, on October 30. The gathering took place the day before the leaders of Armenia, Azerbaijan, and Russia were to meet in Sochi, and as Armenian leaders have signaled that they may be willing to make substantial concessions on Karabakh as they work towards signing a peace agreement with Baku.

The crowd carried signs in Armenian as well as in English, Russian, and French, with slogans including "Stop Azerbaijani aggression” and "Artsakh will never be a part of Azerbaijan.” (Artsakh is an alternative Armenian name for Karabakh.)

The demonstration was organized by the territory’s de facto parliament, which held a session in parallel in which members adopted a lengthy statement rejecting any peace deal envisaging Azerbaijani control over Nagorno-Karabakh.

"Artsakh has never been and will never be part of independent Azerbaijan,” the statement read. “Any attempt to forcibly annex Artsakh to Azerbaijan would be a gross violation of international law and an official license to commit another genocide against the Armenian people.”

Nagorno-Karabakh broke away from Azerbaijan in a war as the Soviet Union collapsed, and since then has been governed by the self-proclaimed Nagorno-Karabakh Republic, which has been heavily militarily and financially backed by Armenia. Following the second war between the two sides in 2020, the fate of Karabakh has been uncertain, as Armenia withdrew its military support and the area’s Armenian population is now protected by a Russian peacekeeping mission.

The status of Karabakh is now the most sensitive issue in the ongoing negotiations. Azerbaijan considers the status issue to be resolved, and that Karabakh’s reincorporation into Azerbaijan proper to be only a matter of time. For the Armenians of Karabakh, meanwhile, that prospect is unacceptable.

As the signals about a possible cession from Yerevan have become clearer, residents started holding demonstrations against coming again under the control of Azerbaijan. But this was by far the largest.

“We are in a life and death struggle, and they are trying to decide our right to live without us. Evil forces are trying to depopulate Artsakh,” said Bishop Vrtanes Abrahamyan, Karabakh’s top religious official, addressing the crowd. The struggle to preserve the country’s Armenian identity and freedom “is a war between evil and good, darkness and light,” he said.

The ongoing negotiations have been conducted on parallel, even competing, paths. One has been led by the European Union, with support from the United States, and the other by Russia. While details of the negotiations are closely held, reports that have emerged suggest that the Russian version envisages delaying the resolution of Karabakh’s status, and a continued presence of the Russian peacekeeping mission, with the European version emphasizing the rights of ethnic Armenians inside Azerbaijan.

It is a wedge that Russia appears eager to exploit.

"If the Armenian people and the current Armenian leadership consider it necessary to choose a version of the peace agreement, the so-called Washington variant, which as I understand envisages the recognition of Azerbaijan's sovereignty over Karabakh as a whole, that is if Armenia thinks that way – then go ahead,” Russian President Vladimir Putin said on October 27. “We will support the choice of the Armenian people."

Armenian Prime Minister Nikol Pashinyan suggested there were varying approaches from the West, but that they were “acceptable” to Armenia.

“The proposals developed by Western countries aren’t unacceptable for us,” he said on October 29. “One of the variants is: Let’s not get too hung up on the Karabakh question, let’s see the current situation as a status quo and clarify the issue of Armenia-Azerbaijan relations – for us this isn’t unacceptable,” he said. “The other approach: Let’s resolve the Karabakh issue. Now the question arises: Which of these sides considers Nagorno-Karabakh to be part of Azerbaijan, and which doesn’t consider it part of Azerbaijan? Unfortunately the international community, without exception, considers Karabakh to be a part of Azerbaijan, and this is evident in all documents.”

In its statement, the Karabakh parliament directly appealed to Russia. "Considering Russia's historical role in ensuring peace and stability in our region, we call to continue its commitment to guaranteeing the security of the people of Artsakh." The statement also asked Moscow "to introduce additional political and military mechanisms."

There was little official response in Baku to the rally in Stepanakert, and official media in Azerbaijan barely covered it. Public television posted an eight-second clip of the rally, describing it merely as opposition to Pashinyan.

Across the political spectrum, many Azerbaijanis interpreted the Stepanakert rally as engineered from Moscow.

“In fact, by having the Armenians in Karabakh rise up, Putin is demonstrating his strength to both [Azerbaijan President Ilham] Aliyev and Pashinyan and is demonstrating to the West that Karabakh is under the direct control of Russia, not Azerbaijan or Armenia, Gubad Ibadoglu, an economist and the head of the opposition Azerbaijan Democracy and Prosperity Party, wrote on Facebook. He called on Aliyev to boycott the Sochi meeting so as to avoid signing any documents that favor Russia and not Azerbaijan.

Tural Ganjali, a member of Azerbaijan’s parliament representing Karabakh, said following the Stepanakert rally that Armenians who did not want to live in Azerbaijan should leave.

“Those [Armenians] who comply with the constitution as law abiding citizens shall be integrated into society where all citizens live in peace and enjoy full rights,” he wrote on Twitter. “Those who are against must find [a] different place to live. Very simple!”