Ahead of Ukraine invasion, Azerbaijan and Russia cement “alliance”

To many in Azerbaijan, it appeared that the new agreement was aimed at ensuring their country’s loyalty to Russia during the attack on Ukraine. Officials said the timing was just a coincidence. 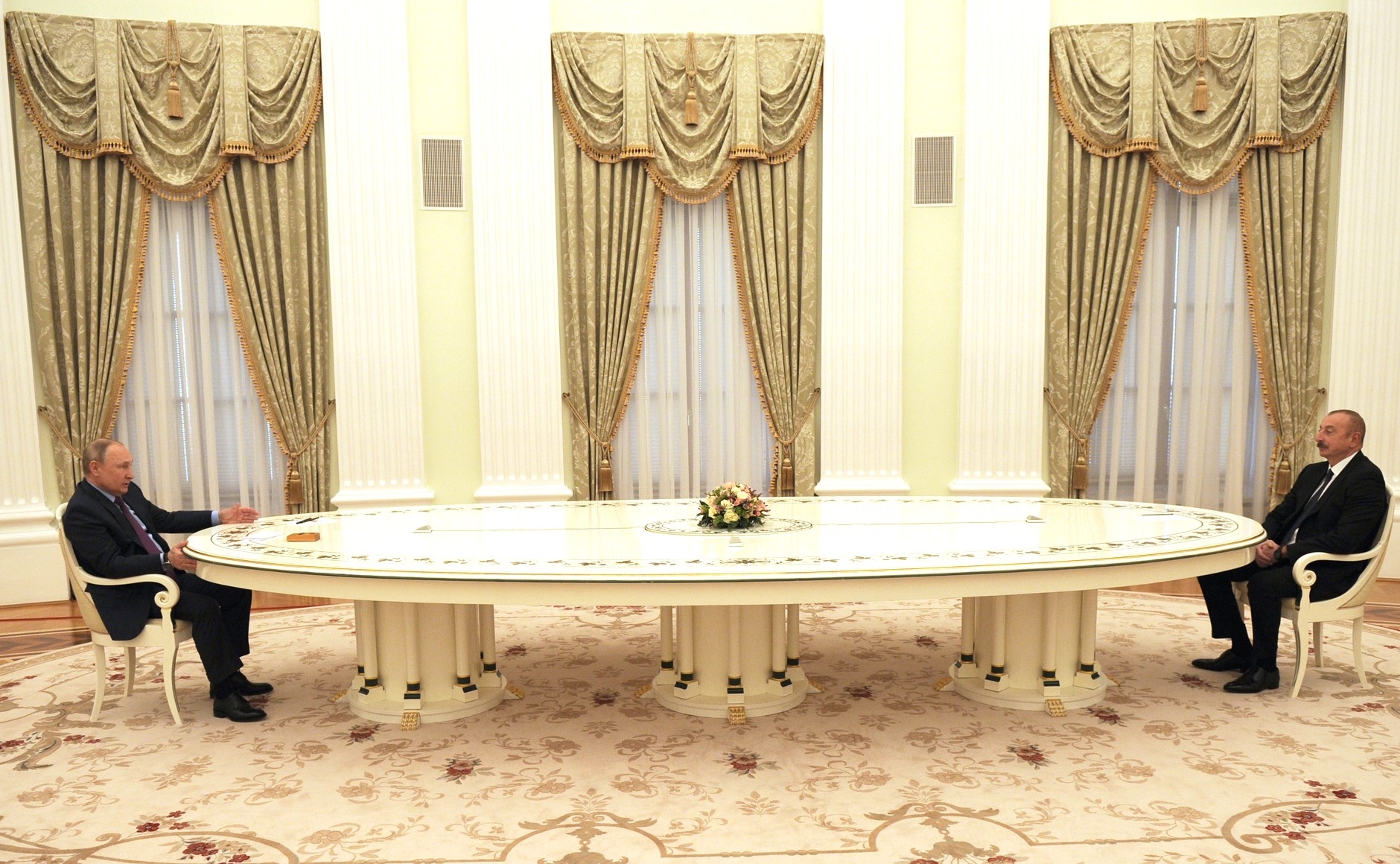 The signing of the declaration “brings our relations to the level of an alliance,” Aliyev said after the signing in Moscow.

Just hours before, Putin had announced that Russia was formally recognizing the Ukrainian breakaway republics of Donetsk and Luhansk. Azerbaijan – which forcefully argues for the principle of territorial integrity when it comes to its own breakaway territory of Nagorno-Karabakh – has remained silent on Moscow’s recognitions.

Just after Aliyev flew home, on the morning of February 24, Russia launched its invasion; official Baku also has yet to comment on that.

To many in Azerbaijan, it appeared that the new alliance was aimed at ensuring their country’s loyalty to Russia ahead of the attack on Ukraine.

“Signing the day before the invasion was not a simple coincidence,” Fuad Shahbaz, a UK-based Azerbaijani analyst, told Eurasianet. “It was likely intended to ensure that Azerbaijan did not get involved in any Western anti-Russian campaign.”

Defenders of the government argued that the document was in fact in the works for months and that the date of its signing was a mere coincidence.

“One argument of those who oppose the Moscow Declaration is that the document coincides with the real threat to Ukraine's territorial integrity and Russia's recognition of the separatist regions. Thus, Azerbaijan is supposedly demonstrating its support for Russia in this conflict,” went an unbylined analysis in the pro-government outlet Qafqazinfo published the day the agreement was signed. “Yes, the date of signing the document indeed comes at a very difficult time, but it is absurd to give it any political meaning.”

At a February 23 meeting in Moscow between Aliyev and prominent Russian journalists, Dmitriy Kiselev asked Aliyev himself about the timing of the signing, noting that it came “during these changing times,” without further specifying. Aliyev also suggested that the timing was a coincidence and that the date had been worked out long in advance of the developments in Ukraine. “Of course, I did not consider the possibility of changing this date,” Aliyev said.

The 43-point agreement covers bilateral cooperation in a number of spheres, but it is in the foreign policy and military realms that it carries its greatest implications.

Point 4 stipulates that the two countries, “holding the same or similar positions on topical international issues, deepen constructive cooperation.” Point 7 obliges them to “refrain from any actions that, in the opinion of one of the Parties, damage the strategic partnership and allied relations of the two states.”

To many Azerbaijanis, that was too much.

“Did you read it carefully?” Ali Karimli, the head of the opposition Popular Front Party of Azerbaijan, wrote on his Facebook page. “One of the parties (of course it will be Russia) can decide by itself that an activity of the other party (Azerbaijan) “damages allied relations.” And then we have to refrain from that activity. With this point alone we have given Russia the authority to supervise all our activities and make us refrain from any activity.”

The agreement also includes several provisions on mutual military aid, including a stipulation that the two sides “may consider the possibility of providing each other with military assistance.”

At the meeting with journalists, Kiselev also asked Aliyev whether Azerbaijan was considering joining the Collective Security Treaty Organization (CSTO), the Russia-led security bloc. Baku has long resisted Moscow’s entreaties to become a member, and Aliyev said that the new agreement rendered the issue moot.

“In my opinion, this [agreement] is enough. After all, it is clear that it is Russia which made the CSTO. If Russia were not in the CSTO, no one would remember the CSTO,” he said. “A step has already been taken to increase the level of military-political cooperation between Russia and Azerbaijan.”

Significantly, the document binds both countries to recognize each other’s territorial integrity. For Baku, this means that Moscow sees Nagorno-Karabakh as Azerbaijani territory, which Russia has previously declined to formally do.

“Russia has never, at the top level, officially and explicitly confirmed Azerbaijan’s territorial integrity on any occasion, not even in multilateral contexts,” Kamal Makili-Aliyev, an Azerbaijani expert on international law, told Eurasianet. “This is why the declaration is important."

There are several other potentially significant provisions.

As per point 25, Azerbaijan and Russia agree to “refrain from carrying out any economic activity that causes direct or indirect damage to the interests of the other Party.” Azerbaijani officials have promoted the idea that gas from their fields in the Caspian Sea could act as a replacement for Europe should Russia cut off its own energy exports as a consequence of the Ukraine conflict.

Point 40 obliges both countries to “ensure the protection, preservation and development of the historical, cultural and religious heritage, as well as the ethnic, linguistic and cultural identity of national minorities living in the territories of the Parties.” That would appear to be a reference to the many medieval Armenian churches on territory that Azerbaijan retook as a result of the 2020 war with Armenia, and which Azerbaijani officials have repeatedly threatened.

The signing of the Russia alliance agreement comes after Azerbaijan last year came to a similar agreement with Turkey, known as the Shusha Declaration. In that document, Azerbaijan and Turkey committed to “coordinating their foreign policies,” which given the frequent disputes between Ankara and Moscow, could put Baku in an untenable position if it is obliged to do the same with Russia.

“A paradox emerges: In Azerbaijan, most people (in official and informal circles and in society) usually see the North as a potential source of danger, and the Shusha Statement is a commitment of alliance aimed at protecting our country from a potential Russian threat,” Shahin Jafarli, an Azerbaijani analyst, wrote in a Facebook post. “Now it’s not clear who will protect us from whom. From what danger will Russia protect us? What threat will Turkey protect us from? What will happen when the interests of these two countries collide? What will Baku do when Ankara wants to cooperate with us against the interests of Moscow, and Moscow wants to cooperate with Ankara on any issue?”

With Russia’s invasion of Ukraine, that balancing act is already being challenged, as Turkey has come out forcefully in Ukraine’s support.

Erdogan spoke with his Ukrainian counterpart, Volodomyr Zelenskiy, on February 24, telling him that Turkey supported Ukraine’s territorial integrity. “The Russian operation against Ukraine is a blow to regional peace and security. It is unacceptable, we reject it,” Erdogan said.

The day before, Erdogan had called Aliyev. “They reiterated the successful development of brotherly and friendly relations between Azerbaijan and Turkey in all areas,” according to the official readout of the call.