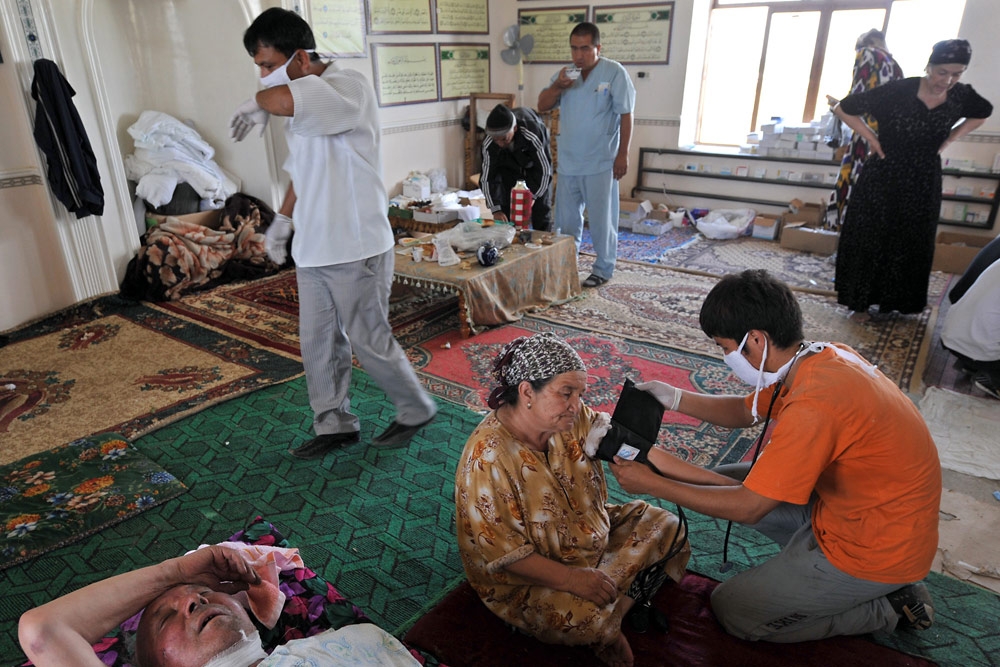 Not only is southern Kyrgyzstan experiencing a refugee crisis, the region is facing a humanitarian disaster brought on by deepening shortages of food and medical supplies.

The normal supply chains and distribution methods for goods and services have collapsed amid the inter-ethnic violence that has engulfed the Osh and Jalal-abad regions. [For background see EurasiaNet’s archive].
Officially, the fighting has claimed at least 124 lives, but unofficial estimates put the death toll much higher. In addition, the government is unable to provide essential services, including law enforcement and fire fighting.

With the violence entering its fifth day, witnesses described the center of Osh as looking like a war zone with sections of the city in ruins and corpses strewn about streets. Authorities reported that 35 uncontrollable fires were raging in the city late on June 14. According to some eyewitnesses, gangs of young men, some armed with Kalashnikovs, attacked firefighters who tried to extinguish the blazes.

Meanwhile, many residents in Uzbek-populated neighborhoods who have been wounded have been unable to obtain medical treatment and remain in their homes for fear of retribution, Tolekan Ismailova, the head of Citizens Against Corruption, an NGO, told the 24.kg news agency from Osh on June 14.

Cargo planes carrying food, medical supplies and other essentials were arriving at Osh Airport throughout June 14. The Ministry of Emergency Situations confirmed that the Osh Mayor’s office was trying to coordinate aid distribution. “At the moment we are receiving humanitarian aid from Bishkek. The aid came from businessmen, political parties and residents of Bishkek,” a spokesman for the Osh mayor told EurasiaNet.org.

“Neighborhood committees have lists of people who need aid the most and aid distributing takes place according to those lists. Regarding the barricaded neighborhoods, the distribution and delivery of aid to those neighborhoods will be taking place with the help of the [police],” he added. The city official did not provide any information about how the lists were created.

Rather than alleviate needs, some ethnic Uzbeks are complaining that the distribution of aid is exacerbating tension. Uzbek witnesses alleged that ethnic Kyrgyz officials were distributing much of the aid in areas that Uzbeks consider unsafe. As a result, some Uzbek neighborhoods are reportedly not receiving any aid.

"I haven't seen any humanitarian aid. If it is coming, it is being distributed among the Kyrgyz, not the Uzbeks. We can't even get outside our [neighborhoods],” said Husanboy Abdugofur, an ethnic Uzbek.

Some Kyrgyz in Uzbek neighborhoods also said they felt isolated. "We are all hungry because we haven't eaten for days. Please come and rescue, if not us, then our children!" said one ethnic Kyrgyz living in a predominantly Uzbek neighborhood in the city.

Kyrgyz authorities reject accusations that discrimination is playing a role in the distribution of assistance. Several officials, in comments broadcast on state television June 14, attributed distribution difficulties to roadblocks and other obstacles that have been erected to protect various neighborhoods.

Local non-governmental organization (NGO) activists in Osh confirmed the roadblocks and ongoing violence are hampering aid distribution. “Near the airport today there were some shootings and people were saying that they don’t want the assistance to be distributed. Also, now it is very hard to find petrol in Osh, you have to bribe and give extra money in order to get some gas for your car,” said Larisa Kuznecova of Charity Fund, an NGO that is helping coordinate distribution with the mayor’s office.

Elmira Joldosheva, the head of a group monitoring the distribution of humanitarian aid in Osh city said armed groups were targeting aid workers.

“Those people are shooting at anything that moves towards them,” she said. “There are some areas in Osh where Uzbek neighborhoods are barricaded. Plus, there are many mixed neighborhoods of ethnic Kyrgyz and Uzbeks who have barricaded their areas to protect their houses.”

With so much uncertainty, rather than rely on humanitarian aid shipped from Bishkek, residents from Uzbek populated parts of Osh and Jalal-abad are calling their relatives and friends in towns adjacent to Osh for help. However, eyewitnesses tell EurasiaNet.org that the security cordons and roadblocks around Osh and Jalal-abad are making the delivery of aid from outside nearly impossible.

“We collected a lot of food and other supplies. But we were told that the security services are not allowing them through the security posts,” said Ravshanbek Sharipov, an Aravan resident.

Alisher Khamidov is a journalist based in Osh.