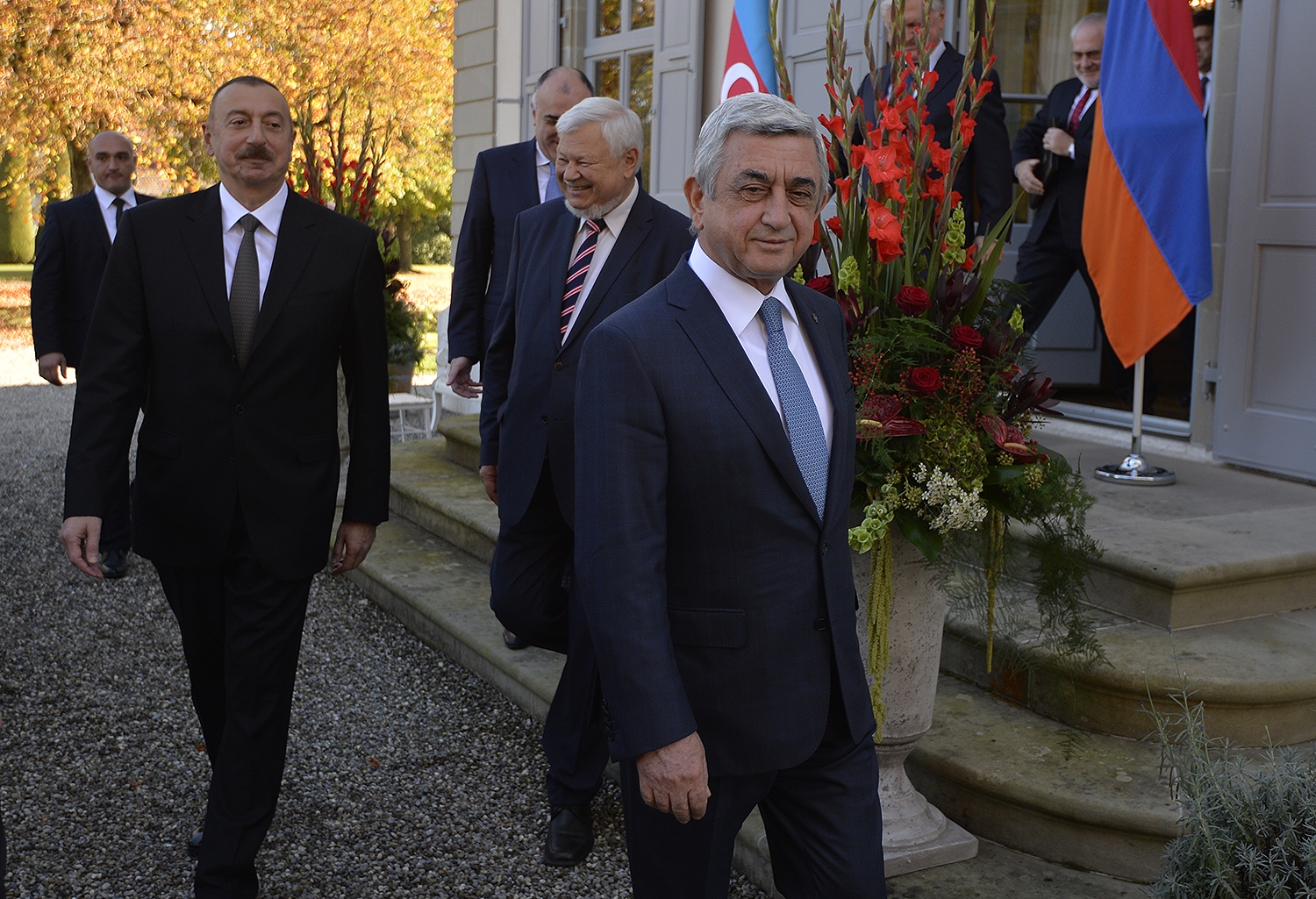 The presidents of Armenia and Azerbaijan, Serzh Sargsyan and Ilham Aliyev, during talks in Geneva. It was their first one-to-one meeting in more than a year. (photo: president.am)

The presidents of Armenia and Azerbaijan met October 16 for the first time in more than a year to discuss the smoldering conflict over Nagorno Karabakh. Expectations for the meeting were low, and the results of the meeting appeared to be meager.

After the meeting in Geneva, the two sides released a joint statement saying that they agreed "to take measures to intensify the negotiation process and to take additional steps to reduce tensions on the Line of Contact." It's not clear what those measures were.

Ahead of the meeting, MP Armen Ashotyan of the ruling Republican Party of Armenia told media that the main goal of the summit would be to “improving the atmosphere” to make more substantive negotiations possible.

At least superficially, the atmosphere did seem to be improved. A photo of the two presidents, Serzh Sargsyan of Armenia and Ilham Aliyev of Azerbaijan showed them both smiling, sitting outside in what appears to be a lovely Swiss fall day.

The mood may still have been good from last week, when the two apparently met informally, along with Belarusian President Alexander Lukashenko, at a summit of the Commonwealth of Independent States in Sochi. According to Lukashenko's account, he was discussing Karabakh with Aliyev. "You will be surprised to hear that the president of Armenia also took part in those discussions, and we all three made jokes at each other," Lukashenko said.

Other observers had had somewhat more optimistic expectations ahead of the talks. Carey Cavanaugh, who was the top United States official working on Karabakh negotiations from 1999-2001, tweeted: "3 easy items to watch for at #Armenia-#Azerbaijan Summit: movement on #Karabakh incidents mechanism; more #OSCE monitors; date 4 next talks." He continued: "2 hard items to watch for at #Armenia-#Azerbaijan Summit: bilateral military CSBMs [confidence- and security-building measures]; steps toward preparing for a future together."

And finally: "Hardest item to watch for at #Armenia-#Azerbaijan Summit: genuine commitment by both presidents to effect political compromise on #Karabakh."

Of the "easy" items, only the "movement on Karabakh incidents mechanism" could be said to have been met, and then only under a generous interpretation.

The dim hopes for any sort of breakthrough were perhaps illustrated by a spat between Azerbaijan Foreign Ministry spokesman Hikmet Hajiyev, and Nairi Petrossian, a foreign policy aide to Sargsyan, in response to Cavanaugh's tweets. Hajiyev insisted that a withdrawal of Armenian forces was the "fundamental issue" and that any technical steps were secondary; Petrossian accused him of "conjecture and speculation."

The last time Aliyev and Sargsyan met was last year, once in May in Vienna and then in June in St. Petersburg. That was just after the worst fighting in more than 20 years in Karabakh, which is internationally recognized as part of Azerbaijan but which has been controlled since 1994 by Armenian forces.

At last year's meetings, there did appear to be a real breakthrough, as the two reportedly agreed to strengthen ceasefire monitoring along the Nagorno Karabakh line of contact, something Azerbaijan had long resisted. Not long after, though, Aliyev walked back that promise and nothing seems to have come of it.

Still, it should be noted that while nearly everyone predicted that this summer would see a return to fighting in Karabakh, it's now mid-October (knock on wood) and the summer has passed without major incident. An Armenian commander in Karabakh said at the end of September that it was the quietest period he remembered in years.

As for the next diplomatic steps, the negotiators said that they will "organize working sessions with the [foreign] Ministers in the near future."