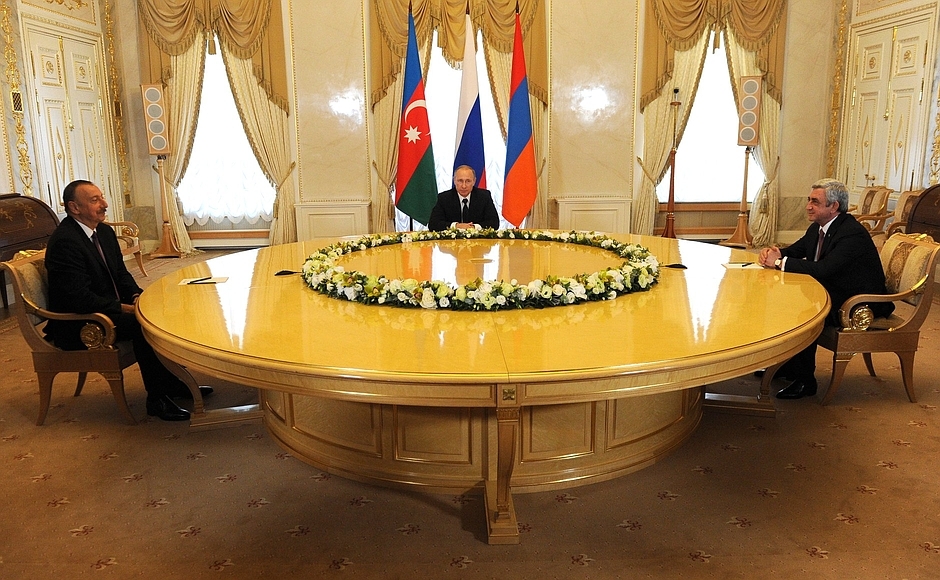 Last month, Azerbaijan appeared to have made a significant concession in its struggle to regain its lost territory of Nagorno Karabakh: it agreed to expand the international mission monitoring the conflict. But Azerbaijan President Ilham Aliyev, newly returned from Moscow where he discussed the plan with his Armenian counterpart Serzh Sargsyan and Russian President Vladimir Putin, is now walking back that promise.

Armenia, as well as the United States, had long pushed for strengthening the monitoring mission, run by the Organization for Security and Cooperation in Europe, because the understaffed, underresourced mission is unable to determine who is to blame for the increasingly common ceasefire violations. Azerbaijan, however, had previously argued that increasing monitoring would only serve to solidify a status quo it saw as illegitimate: an Armenian occupation of its land.

It wasn't clear why Azerbaijan had agreed to the concession, but an OSCE statement after last month's meeting in Vienna said the two sides agreed to implement an "investigative mechanism." It wasn't specified what that mechanism would be, but Armenians and other have pushed for devices that could record the origin of gunshots.

In any case, Aliyev said Azerbaijan has no intention of conceding that: "As for the Armenians put forward as a condition for the issue of application of the mechanism to investigate incidents, I believe that at this stage there is no need," Aliyev said, on the occasion of the country's armed forces day, according to the news agency APA. "If it is meant 'freezing' of the conflict and the adoption of any additional measures in the line of contact, Azerbaijan, of course, will not do it."

The two sides also agreed in Vienna to increase the number of monitors from the current six, which have to cover hundreds of kilometers of rough, in places mountainous, territory. But Aliyev said Saturday that Azerbaijan didn't intend to allow much of an increase. "We are not talking about large mission.... Simply, instead of 6 are 12, 13 or 14 employees, that's all," he said.

Tension along the line of contact between Armenian and Azerbaijani forces has been steadily increasing, and exploded in April in the worst violence between the two sides since a ceasefire was signed in 1994. The monitoring agreement was one small ray of hope that further violence could be minimized, but Aliyev's comments now put that in doubt.