The move comes after the son of Armenian Prime Minister Nikol Pashinyan did the same, and drew unfavorable comparisons. 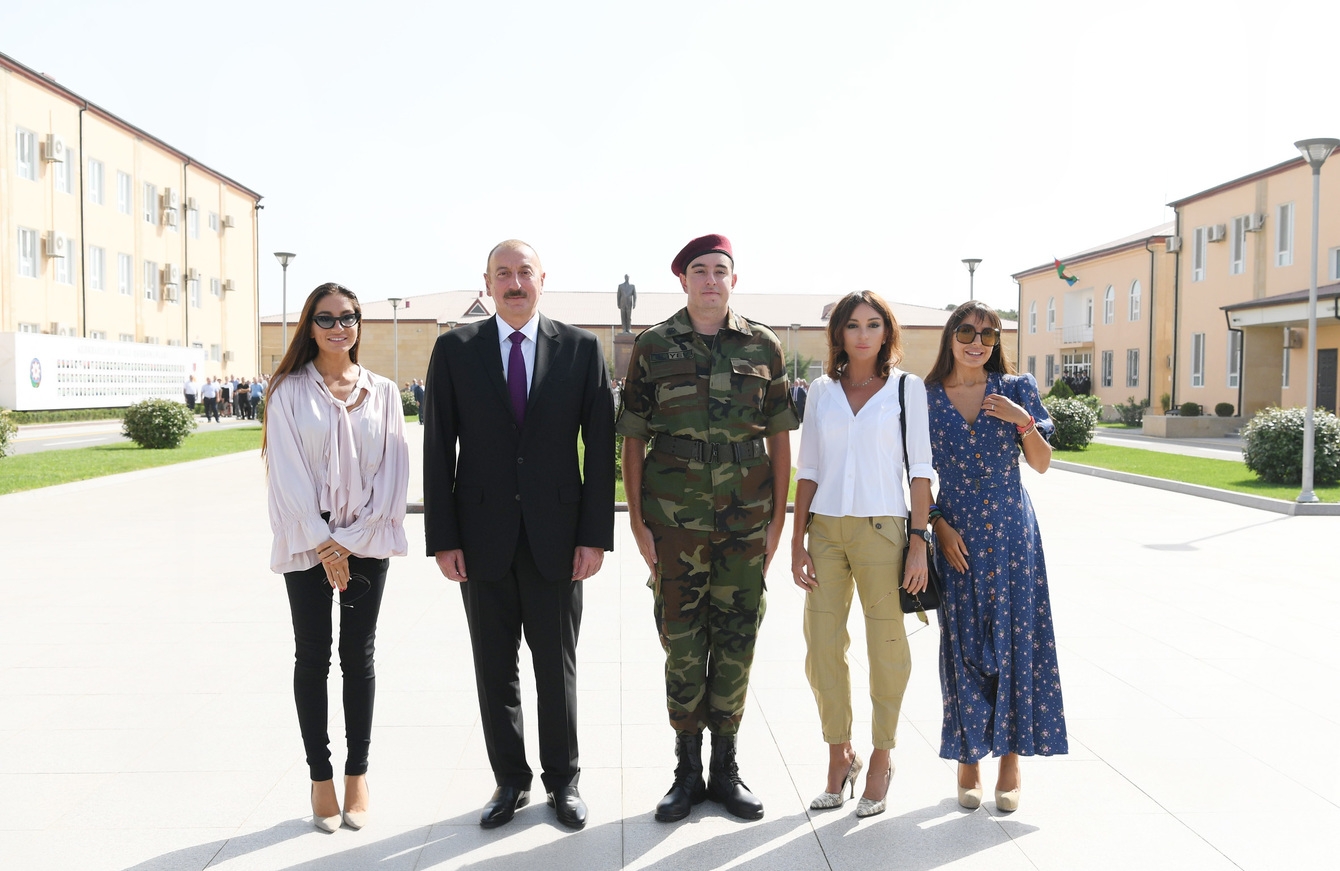 Heydar Aliyev, center, surrounded by family members at the ceremony in which he was inducted into the State Security Service of Azerbaijan. (photo: president.az)

When Armenian Prime Minister Nikol Pashinyan announced in May that his son was joining the army, Azerbaijan's government called the move “cheap populism.”

Now, the son of Azerbaijan President Ilham Aliyev has himself joined the armed services.

The presidential press service announced the move in an understated September 16 release about new recruits being sworn in to a military unit of the State Security Service. “It should be noted that during the ceremony ... among the young soldiers swearing in was the son of the president of Azerbaijan, Heydar Aliyev.” The State Security Service is the successor to the KGB, which young Heydar's grandfather and namesake headed in Soviet times.

Heydar's father, President Ilham Aliyev; as well as his mother, First Vice President Mehriban Aliyeva; and sister Leyla Aliyeva all were on hand to watch the ceremony.

Young Heydar Aliyev is a recent graduate of Baku's Azerbaijan Diplomatic Academy, and had been accepted into an MBA program. For skeptical Azerbaijanis, the sudden change of plans was not a coincidence. “The response to Pashinyan didn't take long,” wrote Orkhan Mammad, a journalist for the Berlin-based Azerbaijani news outlet Meydan TV, on his Facebook page.

Azerbaijani law requires all men to carry out a year of military service before they turn 35. But senior officials routinely find ways of exempting their sons.

Pashinyan could not resist the opportunity to gloat. “For two months now Azerbaijanis have been asking, how did it happen that the son of the Armenian Prime Minister serves in the army, and the son of the Azerbaijani President does not,” Pashinyan said in Yerevan.

The nature of Heydar Aliyev's service drew unfavorable comparisons to that of Ashot Pashinyan, who was sent to a unit close to the line of contact between Armenian and Azerbaijani forces, where tensions are high and the prospect of a full-scale war is not unthinkable. The younger Aliyev will serve in a unit based in Baku, an apparent exception to the usual rule that conscripts serve outside their home region.

“There is a war in the country. The president does not send his son to the army but to the state security service," investigative journalist Khadija Ismailova wrote in a Facebook post. Or, she mused, perhaps “the most important military unit in the country is the one fighting with internal enemies rather than with the foreign enemy.”

Pashinyan himself called on Azerbaijanis to demand that Heydar Aliyev serve on the front line: “Azerbaijanis understand that when Ilham Aliyev easily aggravates the situation at the borders and along the line of contact, he personally does not have any problems, because he knows that the sons of other Azerbaijanis will die, and his son is not threatened.”

And an article on haqqin.az, a news website close to the State Security Service, called into question just how close to the front line Ashot Pashinyan was. “According to our information, he was sent to a military unit in the occupied Jebrayil region of Azerbaijan [one of the occupied territories surrounding Nagorno-Karabakh proper], at a distance of 50 kilometers from the line of contact and dealing with mainly quotidian affairs,” the site reported. “In spite of his assignment to that unit, he spends most of his time in Khankendi,” the Azerbaijani name for the Karabakh capital, which Armenians call Stepanakert. “All in all, it is cheap propaganda.”