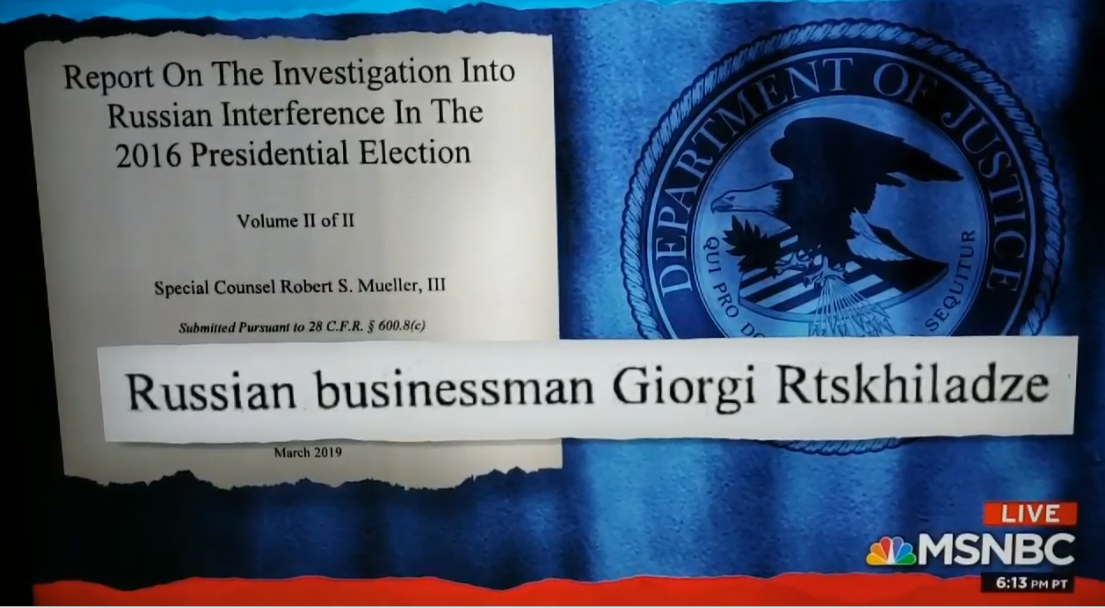 Screenshot of a recent broadcast by MSNBC host Rachel Maddow in which the difficulties of Georgian pronunciation were explored.

It is no easy task to sum up the recently unveiled report on Russian meddling in the 2016 American elections; the 448-pager is a long and complex read. And one Georgian last name is making it all the harder for the American media.

“This name starts with five straight consonants before you get to a very unhelpful vowel,” MSNBC show host Rachel Maddow lamented as she reviewed findings of the Russia investigation in a recent broadcast. “I apologize for not knowing how to pronounce things that start with letters R, T, S, K, H, in that order.”

Maddow was referring to Giorgi Rtskhiladze, a Georgian-American businessman, who played a cameo role in perhaps the most salacious, or salaciously alleged, episode in President Donald Trump’s experience in Russia.

It’s long been rumored that before becoming president, Trump enjoyed a night out with Russian female escorts in Moscow which resulted in compromising tapes, allegedly used by Russia as leverage on the now-president. While many in the anti-Trump #resistance in the U.S. showered Trump with mockery about the incident, in Special Counsel Robert Mueller’s final report there was nary a trickle of confirmation.

Still, the document does include one intriguing footnote on the proverbial tapes, which is where Maddow’s “R,T,S,K,H” guy comes into play. According to the footnote, Rtskhiladze, who became a U.S. citizen but who did business in Russia, warned Trump’s former lawyer and fixer Michael Cohen of “tapes from Russia.”

“I’m going to go with Rizzkahlahzky?... I’m going to go with Rizzkahlazee until I’m corrected,” Maddow went as she carried the story. The name soon became the target of much sport as Twitter users batted around suggestions for pronunciation: “Rumplestiltskin,” “rrrt skill and zee,” “just sneeze.” “This reminds me of my favorite Onion Headline: ‘Clinton deploys vowels to Serbia,’” went one tweet.

Rtskhiladze lawyers are now trying to clear his consonant-rich name. They pushed back against Mueller’s report, accusing it of “glaring inaccuracies,” and demanded the removal of the titillating footnote. The dialogue between Rtskhiladze and Trump’s former lawyer has been spliced to “produce the ugly insinuations and allegations… all while impugning Mr. Rtskhiladze’s character,” Rthskhiladze’s lawyer told Bloomberg.

This is far from the first time that American journalists have been vexed by Georgian surnames. Just last month, in the opposite corner of the U.S. media, Fox News newscaster Heather Childers hosted former Georgian President Mikheil Saakashvili to talk about the probe and introduced him as “Saakashviluh.”

Saakashvili, who did the rounds on Fox to vouch for Trump’s integrity, had his last name mispronounced many times – “Shashkashvili, Sahakashlili” – on American TV. His predecessor, the late Eduard Shevardnadze, was shortened to “Shevy” in the American and British press to save time, breath and ink.

To be sure, both former Georgian presidents’ last names featured a more or less fair-and-balanced alternation of consonants and vowels as far as Georgian last names go. (If you think Saakashvili is hard, try Pirtskhalaishvili.) It’s the liberal use of consonants in Georgian and other Caucasus languages that’s a real jawbreaker for an English speaker.

British-American author Tony Anderson perhaps put it best. “Clusters of consonants hang together like mussels on a rock, though far more difficult to swallow,” he wrote in his book, Bread and Ashes: A Walk through Mountains of Georgia. He even quipped that some of the Caucasus peoples disappeared because “they must have choked to death on their own consonants.”