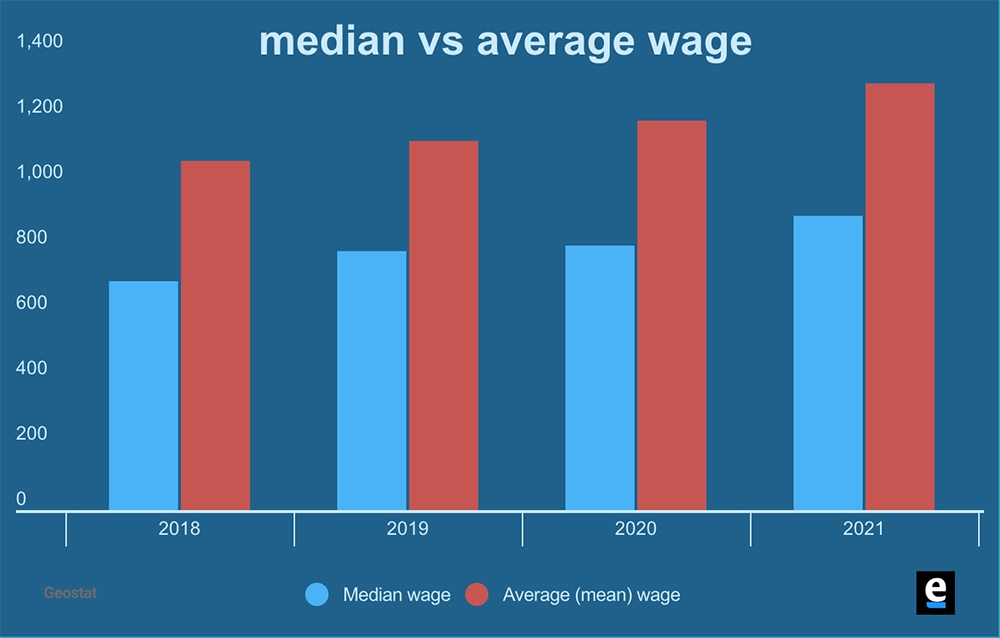 The recent introduction of median salaries in Georgia’s official statistics publications has shown what many have long suspected: Georgians make much less money than the numbers used to suggest.

In numbers released on October 10, Georgia’s National Statistics Office (Geostat) reported that the median wage was 900 lari ($320) in 2021. It was the first time that Geostat had released figures on the median wage, and the figures were about one-third lower than the average salary, the figure that the agency used to cite.

The median salary is believed to be a more accurate reflection of a country’s earnings picture, in particular in unequal societies where a small wealthy minority can distort the average.

Average earnings “give us no information about how these earnings are distributed,” Davit Keshelava, a senior researcher from ISET Policy Institute, Georgia’s most prominent economic think tank, told Formula TV last year. It is “less informative on how the overall situation of the population has changed over time.”

The criticism pushed the agency to finally address the gap.

“Considering the growing interest of consumers in wage statistics, the National Statistics Office of Georgia is implementing an additional indicator of labor statistics, the median earnings of employees based on data from the Revenue Service of the Ministry of Finance of Georgia,” Geostat said in the recent report.

In many sectors, the median is significantly lower than 900 lari. In the health and social care field, the median monthly wage amounted to 774 lari ($277); in education it was 649 lari ($233). Workers in sectors like information and communication or mining, on the other hand, are paid double the overall median, Geostat data show.

The median income is widely applied globally to illustrate labor trends. It is the “preferred measure of average earnings as it is less affected by a relatively small number of very high earners than the mean is,” according to the UK’s Office for National Statistics. (Neighboring Armenia and Azerbaijan both report official income data using the average.)

According to Geostat, both median and average monthly earnings saw steady annual growth over the past several years.

But the agency publishes only nominal data, not taking changes in purchasing power into account. This means that the growth is partly erased by the steadily rising cost of living in Georgia, with inflation particularly affecting prices of basic products and services.

Last year, for example, median wages saw an annual growth of 11.2 percent, while average earnings grew by 9.6 percent. Annual inflation, however, amounted to 9.6 percent in the same period. Low-paid jobs have been one of the main drivers pushing Georgian workers to emigrate.

It was for these reasons that Geostat would draw much ire with its averages.

This year, too, in Georgian social media some joked that a “1” was mistakenly added before the 305 to end up with such an unrealistic average number, while others more familiar with the methodology credited well-paid state officials for padding the figures.

As an old Georgian joke, featuring the popular stuffed cabbage dish, goes: “Some eat meat, others eat cabbage. On average, we all eat dolma.”