A Georgian anti-LGBTQ warrior’s vigilantism has long gone unchallenged. One lawyer is trying to change that. 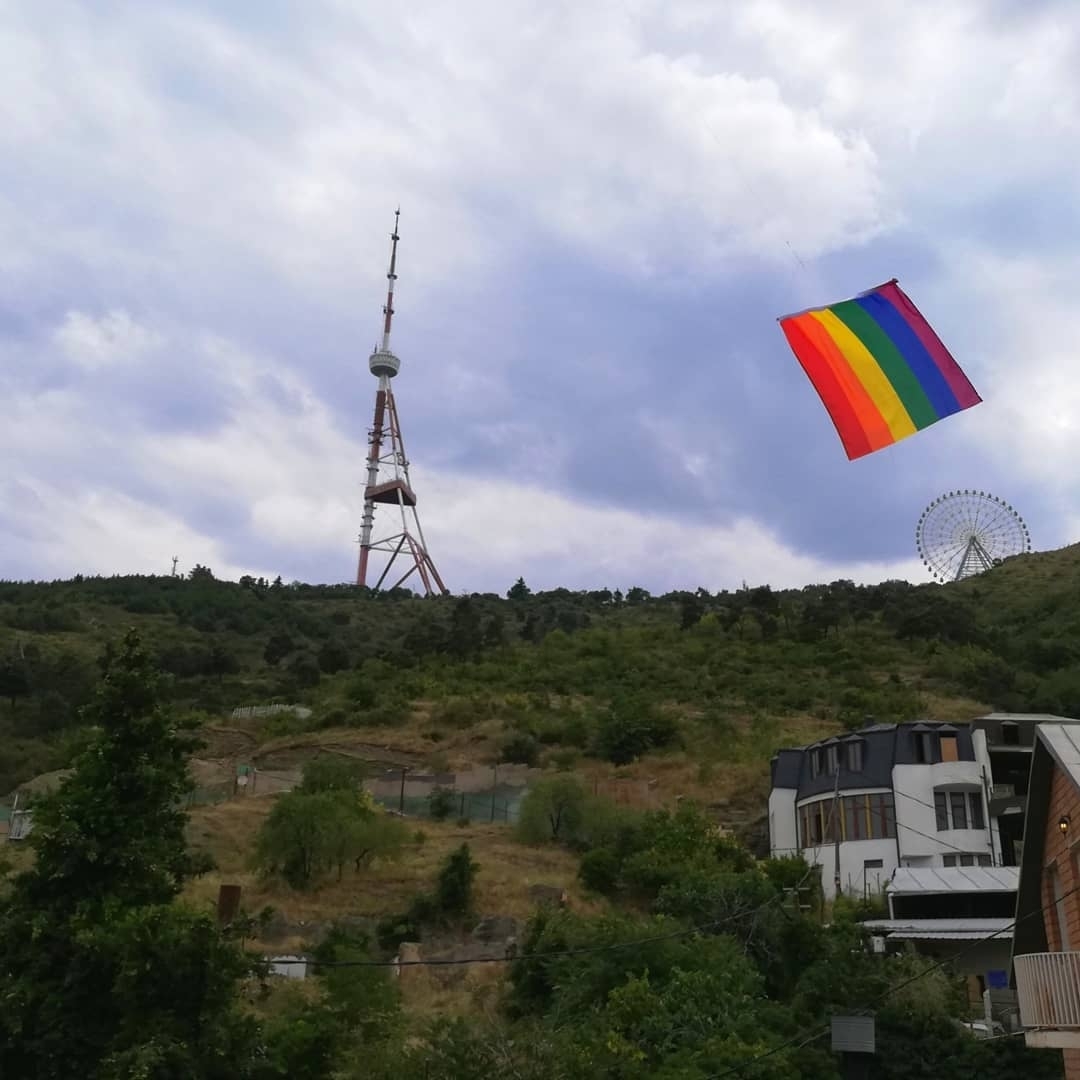 A drone carries a rainbow flag over Tbliisi to help celebrate the country's first, albeit small, Pride event. An American-Georgian lawyer is now seeking prosecution for a far-right activist who tried to disrupt the event. (photo: @tbilisipride Instagram)

The bullying of Georgia’s gay community has at times taken on a medieval air: A local “knight” and his loyal legion of thugs have for years sought to smite any attempt by LGBTQ Georgians to gather publicly in Tbilisi. Now, a U.S. lawyer-turned-Georgian citizen is bringing the struggle into the realm of contemporary law.

Theodore Jonas, a Georgian-American living in Tbilisi, has filed a complaint against businessman and activist Levan Vasadze for threatening and trying to break up Georgia’s first-ever Pride event on July 8.

Jonas wrote in his complaint to Georgia’s Prosecutor’s Office that on the day of the Pride event and in the run-up to it, Vasadze committed a whole slew of crimes, including “unlawful discrimination, threats of bodily injury, persecution of people for exercise of their rights of free speech assembly and interference in their right of assembly, with threat of violence and using arms.”

Vasadze responded in a video address that he posted on YouTube. “Revenge against me by globalist liberals continues,” he said. “They rolled in heavy artillery in the person of American lawyer Ted Jonas.”

A bit of a globalist himself – he studied at Emory University in the U.S. – Vasadze styles himself a paladin of the traditional Georgian way of life. He often appears in traditional costumes, rants against liberal ideology in online videos and is commonly referred to as “a knight” – he was bestowed the mostly meaningless title by the Georgian royal family. He’s been trying to forge a global alliance for his fight against the LGBTQ rights movement and in 2016 hosted an international meet-up of homophobes in Tbilisi.

This July, he mobilized, in his own words, a “legion” of vigilantes to “run over” LGBTQ Georgians’ attempt to hold the country’s first-ever Tbilisi Pride event. He claimed that planeloads of homosexuals from around the world were headed to Tbilisi to take part and asked U.S. President Donald Trump to help expunge LGBTQ rights-supporting “globalists” from the American Embassy in Georgia. On the day of the event, with a retinue of burly men in tow, Vasadze went prowling Tbilisi’s streets in search of an LGBTQ demonstration, having warned police and foreign diplomats to stay out of his way.

A small group of Georgian LGBTQ rights activists still managed to throw Vasadze and his legionnaires off their track and gather on that day at a surprise location. They held a rally outside the Interior Ministry in protest against the police’s refusal to provide protection for Pride against hate groups. The gathering swiftly dissipated as Vasadze and his supporters neared the venue, but the event still was deemed a small victory for the nation’s beleaguered LGBTQ community.

Jonas says Vasadze’s campaign to thwart Pride was criminal on several levels. Vasadze’s formation of a militia group, threats of physical violence – Vasadze called supporters to bring “shepherd’s crooks” and “belts” to deal with LGBTQ activists – and attempts to prevent citizens from exercising their constitutional right to assembly all amounted to violations of the law, Jonas said.

Vasadze said that he was “personally hurt” to be confronted by Jonas, whom he says he has known for years and who was his neighbor in Tbilisi in the 1990s. “He was one of the first Americans to move to Georgia and to fall in love – at least I thought so – with the Georgian traditions,” Vasadze said in his lengthy videotaped response to Jonas.

“I belong to the category of people naively loyal to our eternal traditions that hold that personal connections and neighborly relations mean something, especially if for years this man greets you with a playful smile and asks ‘how are you?’”

Jonas, for his part, called attention to Georgian law enforcement’s apparent reluctance to bring Vasadze to justice. “I’m concerned that the Prosecutor’s Office of Georgia has unjustifiably failed, or refused, to prosecute Georgian citizen Levan Vasadze for serious criminal acts,” Jonas wrote in his complaint, which was shared with Eurasianet.

Police have launched an investigation into Vasadze’s “creation and leadership of an illegal formation,” but Jonas and many other observers say it is proceeding at a leisurely pace and doubt that the authorities have a genuine intention to prosecute the knight.

Government critics point out that the authorities have the ability to deal with unauthorized gatherings when they want to. Police unleashed their full range of anti-riot machinery against massive anti-government protests of June 20, and the Prosecutor’s Office swiftly brought charges against many of the protesters, including some leaders of the political opposition. The police’s claim that they couldn’t protect LGBTQ activists from Vasadze’s posse, and the prosecutor’s failure to bring charges against him, stood in sharp contrast.

“Where is the knight? … Why is the knight not arrested?” Akaki Bobokhidze, member of European Georgia, an opposition party, asked a representative of the Prosecutor’s Office who had come to parliament to seek legislators’ permission to prosecute one lawmaker for his role in the protests.

Opposition parties claim that Vasadze and his group are linked to the ruling Georgian Dream party and are being trotted out as scarecrow to divert attention from government’s problems. “These people are part of the government, the dark side of it,” alleged Roman Gotsiridze, an MP with the United National Movement party.

Jonas says that his complaint will have, at the very least, a crystallizing effect. If prosecutors fail to charge Vasadze, then their double standard in law enforcement will be exposed, Jonas said in an interview with the news site Civil.ge. He also encouraged activists and human rights watchdogs to take better advantage of the courts in their fight for human rights. “My take on this – as an activist – is very American in style,” he said in the interview. “In America, we have the assumption that it [the government] won’t behave correctly unless you force it in the courts to do so.”