Repeated attempts from Baku to force Yerevan to negotiate may be having the opposite effect, as the government is now vulnerable to being seen as easily bullied. 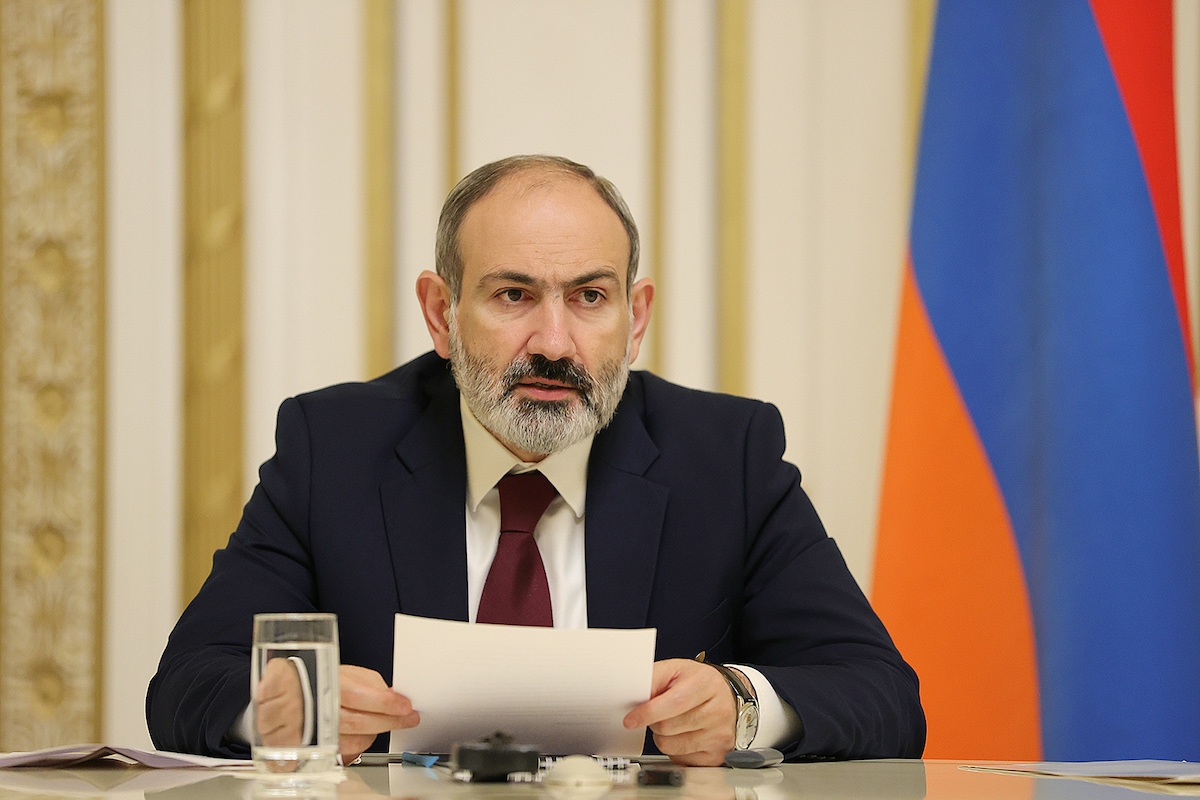 Armenian Prime Minister Nikol Pashinyan at a cabinet meeting to discuss a new round of fighting with Azerbaijan. (photo: primeminister.am)

As clashes erupted again on the Armenia-Azerbaijan border, the Armenian government is coming under fire for what many criticize as its ineffectual response to Azerbaijani offensives.

The November 16 fighting, which Armenian officials say was the result of an Azerbaijani cross-border incursion, was the worst since the two sides fought a war last year.

Exact figures on the Armenian casualties are not clear: On November 16 ruling party member of parliament Eduard Aghajanyan reported that 15 Armenian soldiers had been killed, but the next day the Ministry of Defense reported one killed, 13 taken captive, and 24 missing.

The fighting followed weeks of intensifying pressure from Azerbaijan on various fronts, and the conflicting information on casualties only fed the narrative that the current government is incapable of dealing with the serious national security issues the country now faces.

The international reaction, as is often the case, tended to call for an end to the violence without blaming one particular side. Many Armenians saw that as a failure of the country’s diplomats.

One article on the news website 168.am, headlined “Diplomatic disgrace: the Ministry of Foreign Affairs proves it doesn’t exist,” described the various international reactions as “both-sidesing” the fighting rather than directly laying responsibility on Azerbaijan.

“The MFA did not manage to get even documentation of an obvious fact from its closest partners at such a difficult stage,” the website wrote. “The topic is being actively discussed on the internet, both by politicians and ordinary people, who describe it as a diplomatic defeat.”

Prominent journalist Tatul Hakobyan, who reported from close to the scene of the fighting on November 17, said on Facebook that “the reaction of the international audience clearly shows that Armenia has no allies.”

Another journalist, Arshaluys Mghdesyan, posted on Facebook: “Can you remind me of a single structure or country that is clearly condemning Azerbaijan's aggression against the sovereign territory of Armenia? How would you assess the work of our Foreign Ministry?”

Recent weeks have seen a renewal of Azerbaijan’s pressure campaign against Armenia, apparently with the aim of forcing Yerevan to sign new agreements on cross-border transportation routes and on formally demarcating their border.

Azerbaijani troops have restricted traffic on two key roads in Armenia, killed a civilian in Karabakh and engaged in multiple skirmishes with Armenian forces.

Meanwhile, Armenian government officials, led by Prime Minister Nikol Pashinyan, have been emphasizing the positive and trying to sell Armenians on the potential benefits of the new deals, including economic gains from the new trade routes and the chance to finally live in peace with their neighbors.

“We have adopted the agenda of opening an era of peaceful development,” Pashinyan said in a November 7 interview with public television. “We received the mandate to open this era from our people as a result of the snap parliamentary elections.”

To many, though, that message smacks of naïveté in the face of what they see as Azerbaijan’s attempts to intimidate Armenia. “Azerbaijan and Turkey want peace with Armenia, but with an Armenia that is kneeling before them,” Hakobyan said in a recent interview with RFE/RL

The situation is not helped by the Azerbaijani media’s tendency to portray Pashinyan positively, as someone interested in making a deal but thwarted by the revanchist opposition.

If Azerbaijan is trying to use the escalation to force Armenia to sign the agreements, it may be a miscalculation, as the unstable situation leading up to the recent events already has spoiled Pashinyan's attempt to agree to a deal with Azerbaijan.

In October, the well-connected news website Aliq Media reported that the two sides had tentatively reached agreements on transportation and border demarcation and that Pashinyan and Azerbaijan President Ilham Aliyev would sign them on November 9, the one-year anniversary of the ceasefire that ended last year’s fighting.

That date is notorious in Armenia – the ceasefire agreement is seen as a capitulation – and the reports about the potential new deals caused an outcry.

“Pashinyan will sign every disastrous document there is,” said Armen Grigoryan, a documentary filmmaker, in an interview with the TV network Fifth Channel. “After Pashinyan signed the capitulation, if he signs any more documents that will be the end of him.”

Pashinyan later walked out on the deal, Aliq reported.

Following the recent fighting, the political opposition called on the government to step down.

“Nikol Pashinyan's government brings casualties, territorial losses, division and chaos,” the main opposition fraction in parliament, the Armenia Alliance, said in a statement. “The ultimate solution to this situation is the departure of these authorities. Nikol Pashinyan's resignation should be followed by the unification of all possible forces and the formation of a new government.”

Armenians have been further enraged by videos that have spread in social media of Azerbaijani soldiers humiliating Armenian captives.

Another documentary filmmaker who has recently released a film critical of Pashinyan, Hovhannes Iskhanyan, called on the political opposition to topple the government. “Go to cafes, restaurants, cinemas, and call on everyone to remove the Turkish agents [a common epithet for the Armenian government] from Armenia,” he wrote in a Facebook post.

Shortly after the post was published, police arrested Iskhanyan “on suspicion of preparing an attempt to usurp power,” a crime punishable by up to 15 years in prison, though formal charges haven’t yet been filed.