Is Ruben Vardanyan the savior of a nation, a Russian agent, or a billionaire with delusions of grandeur who is now in over his head? 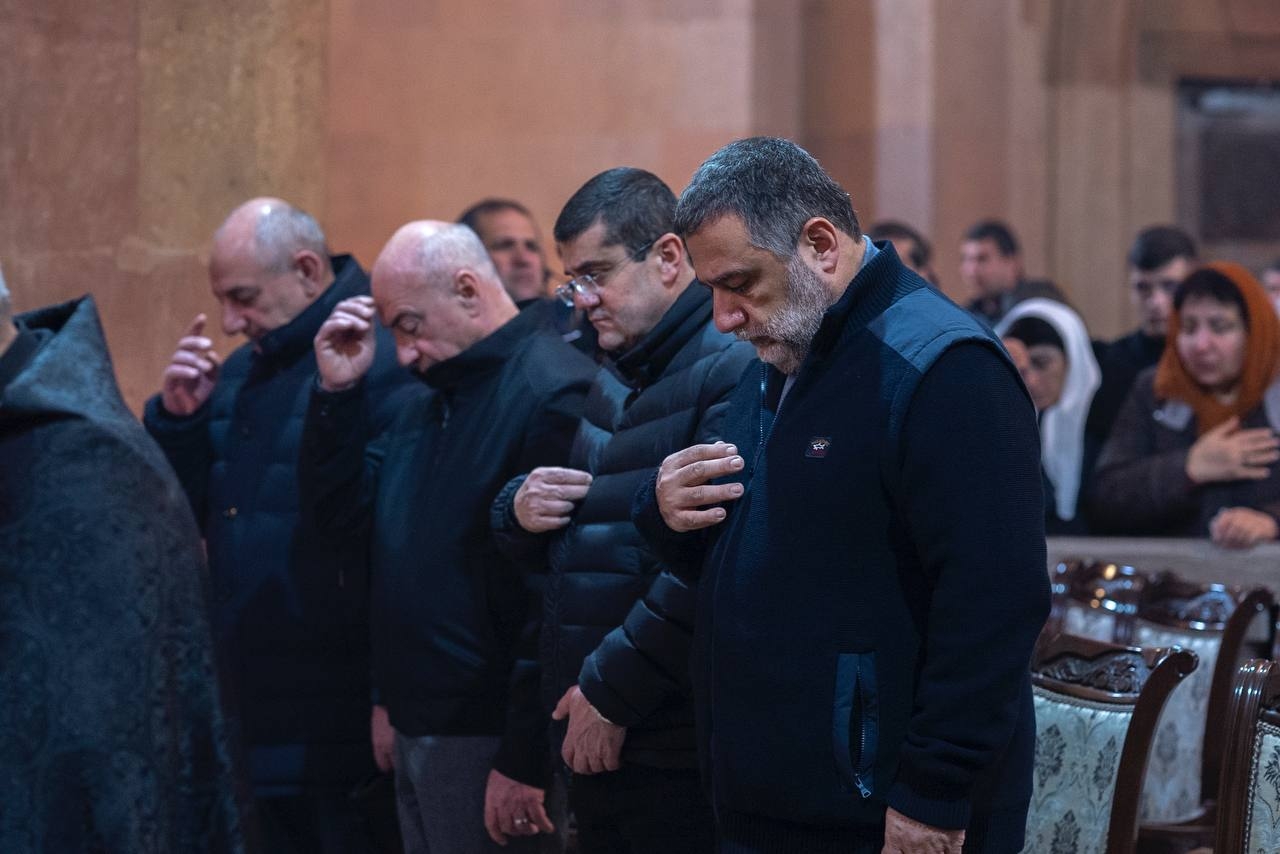 In the crisis over Azerbaijan’s blockade of Nagorno-Karabakh, a new de facto leader of the territory’s de facto government has emerged.

It is Ruben Vardanyan, the territory’s newly appointed state minister, who has been the face of Karabakh’s response. As the de facto authorities manage the fallout from the blockade, Vardanyan has been out front: issuing decrees, making daily addresses to the population, and acting as the point man for the international media covering the crisis.

That he is in this role is a surprise.

It was only in September 2022 that the Russian-Armenian billionaire businessman and philanthropist made the unexpected announcement that he was renouncing his Russian citizenship and moving to Karabakh. A month later he was offered a role in the leadership, as state minister, a position which was given expansive new authorities just as he assumed it.

He quickly consolidated power. Shortly after he took office nearly all of the territory’s de facto cabinet ministers were dismissed; more recently the powerful national security adviser, Vitaliy Balasanyan, also was sacked. And as the blockade has shone a spotlight on Karabakh, the nominal head of the self-proclaimed state – Arayik Harutyunyan, the president – has receded into the background.

Vardanyan’s rise has been controversial. From Baku, his quick rise to power smells of a Kremlin plot, and the hatred he has attracted in the pro-government Azerbaijani press is intense even by the standards of that medium. He is distrusted by many in Yerevan, too, for his ties to the former Armenian ruling regime and his opposition to the current government.

And while he was initially welcomed in Karabakh itself as a potential savior, who might use his personal wealth and ties to powerful international figures to rescue the territory in a time of deep distress, those hopes have largely vanished. He has proven unable to reopen the road more than a month after Azerbaijan government-sponsored protesters launched a demonstration there, leading to a standoff that has effectively marooned Karabakh’s population and prevented them from getting any supplies from the outside world.

Amid much speculation about why he came to Karabakh, he has framed the decision as one motivated by patriotism. In a Zoom interview from his office in Stepanakert, Vardanyan said that after two decades of involvement in philanthropy in Karabakh, what spurred him to enter politics was an episode in August: the return to Azerbaijani control of a handful of communities in the region of Lachin.

While the handover of the villages was stipulated in the 2020 ceasefire agreement that ended the Second Karabakh War, many Armenians saw the speed with which it happened as a capitulation by the leadership in Yerevan and Stepanakert. Vardanyan was one of them.

The handover took place “too early, without any reasons,” he said. “I saw the slow erosion of the independence of Artsakh.” (Artsakh is an alternative Armenian name for the territory.)

“For me this was unacceptable, I saw people losing their faith, their belief that somebody would support them. So I said to myself, ‘OK, if I am a person with the knowledge and competence – if not now, when?’”

Many in the region, however, continue to suspect ulterior motives. From Baku, his surprise appearance has been presented as part of a Russian scheme to scuttle the negotiations over a peace agreement between Armenia and Azerbaijan that had been making progress.

“We are ready to talk about that with Armenians who live in Karabakh, not with those who have been sent from Moscow hiding in their pockets billions of stolen money from Russian people, like a person called Vardanyan who was transferred from Moscow there with a very clear agenda,” Azerbaijan President Ilham Aliyev said in November.

Vardanyan has done little to dispel those suspicions, in particular with his consistent defense of the Russian peacekeeping force in Karabakh. The peacekeepers are supposed to be maintaining security on the road but they have proven unable or unwilling to manage the crisis, outmaneuvered by Baku and its band of ersatz protesters.

Asked why Russia – which is singled out in the 2020 ceasefire agreement as the party responsible for protecting the road – is not doing anything to manage the crisis, Vardanyan parried back: “Why isn’t the UN doing more? Why aren’t France and the United States doing more? Why is the West not putting sanctions on Aliyev?”

He also dodged a question about the widespread belief that Russia, with its hands tied in Ukraine, has been unable to devote the energy that would be required to resolve the crisis in the Caucasus. “I don’t want to speculate,” he said. A former adviser to Russian President Vladimir Putin, he declined to elaborate on his current ties to the Russian government. “I have a lot of friends in Moscow. I have a lot of friends in Britain, by the way,” he said.

"His role is a bit of an enigma. It's not clear who he represents,” one foreign diplomat said in an interview on condition of anonymity. “Baku thinks he is an agent of Moscow, whether that is true or not, we don't know.”

The Russian agent theory, however, has lost some credibility as the blockade has dragged on. “If he were a Russian project then the road would be opened. The fact that the road hasn’t opened damages Vardanyan’s reputation and if he were Moscow’s project that wouldn’t be happening,” analyst Thomas de Waal told the Azerbaijani news agency Turan. “I think he went there with Russia’s agreement, but he has his own agenda.”

What that agenda may be remains unclear. Like many very rich men, he appears to see himself in outsized terms, and his deep involvement in the Armenian world via his philanthropy has long bred speculation about potential political ambitions.

His arrival in Karabakh in the fall was widely welcomed by locals. The future of the Karabakh Armenian population is deeply uncertain following the 2020 war, as Azerbaijan appears to be nearing its goal of regaining control over the territory. Vardanyan’s wealth and proximity to power seemed a potential lifeline for Karabakh; a common belief was that he would not have moved to Karabakh and taken on such a role had he thought the situation were hopeless.

But in power, the reviews have been decidedly mixed.

Some have given him credit for his skill in calling worldwide attention to the blockade, using his contacts garnered on the international philanthropic circuit.

“I think it’s too early to talk about his actual performance on the ground, I mean his actual management and governance and so on, but in terms of public relations I’m quite impressed,” Tigran Grigoryan, an analyst and Karabakh native, said in an interview with Armenian news site Civilnet. “He’s using his personal contacts and his personal ties in the West and in the Russian liberal circles to raise awareness about the situation. [...] That’s a real asset that he has been using very effectively.”

But as the crisis has dragged on, Vardanyan also has increasingly attracted criticism for his public messaging. While many Armenians have sought to present the blockade as a total strangulation of the territory, Vardanyan has instead repeatedly emphasized the exceptions: some humanitarian aid provided by the Russian peacekeepers or transport of seriously ill patients out of the territory with Red Cross escort.

In the interview, he downplayed the severity of the situation. While Karabakh was now deprived of many food products, notably fruits and vegetables, he said people were also able to deal with long-term deprivation during the first Karabakh War in the 1990s. “We can stay a long time in these conditions,” he said.

In Yerevan, Vardanyan’s rise also has been met by skepticism on other grounds. He has long been associated with the former ruling regime in Armenia which Prime Minister Nikol Pashinyan ousted in the 2018 Velvet Revolution. At one notorious meeting in Moscow later that year, Vardanyan publicly criticized Pashinyan even as Putin and Pashinyan were trying to make the Armenia-Russia alliance work.

Vardanyan’s quick ascension to power, without the benefit of any election, also damages the image that Karabakh tries to present of itself, as a democracy that should not be subsumed into the autocratic Azerbaijan.

“The rise and the role of Vardanyan stands in direct contrast with the decades-long commitment to building democratic institutions in Karabakh,” analyst Richard Giragosian told Eurasianet. “Institutional democracy in Karabakh is in danger of being undermined by the power of Vardanyan over a democratically elected leadership.”

And suspicions about Vardanyan’s agenda are fueled by the fact that he doesn’t have a natural political constituency in Armenia or Karabakh, Giragosian said. “Vardanyan has been out of Armenia since 1985, with no local power base and marginal political standing or status,” he said. “Despite his impressive philanthropy in Armenia, Vardanyan is still a product of Moscow, as the source of his wealth and as the center of his influence. And even his record as a Russian businessman is seriously tainted by his involvement in a criminal money laundering enterprise on behalf of Putin-affiliated interests and individuals.”

As the crisis has dragged on, Vardanyan’s clashes with the leadership in Yerevan have become more open. Armenian officials appear to be washing their hands of Karabakh: At a January 11 press conference Pashinyan said that “it is not the government of Armenia that should decide the fate and relations of Nagorno-Karabakh. The people of Karabakh should decide for themselves and should have communication, including with the authorities of Azerbaijan.” The next day his ally, parliament speaker Alen Simonyan, said that Armenia was “not a party” to the blockade dispute.

Vardanyan shot back. In a social media post he enumerated Armenia’s allies, pointedly mentioning “Armenians who in the last elections voted for parties declaring full support for Artsakh.” The messages from Yerevan made it clear, he said, that “the only choice now is to fight.”