Washington’s reticence to get involved is a departure from previous years, when it was one of Tbilisi’s most reliably vocal allies. 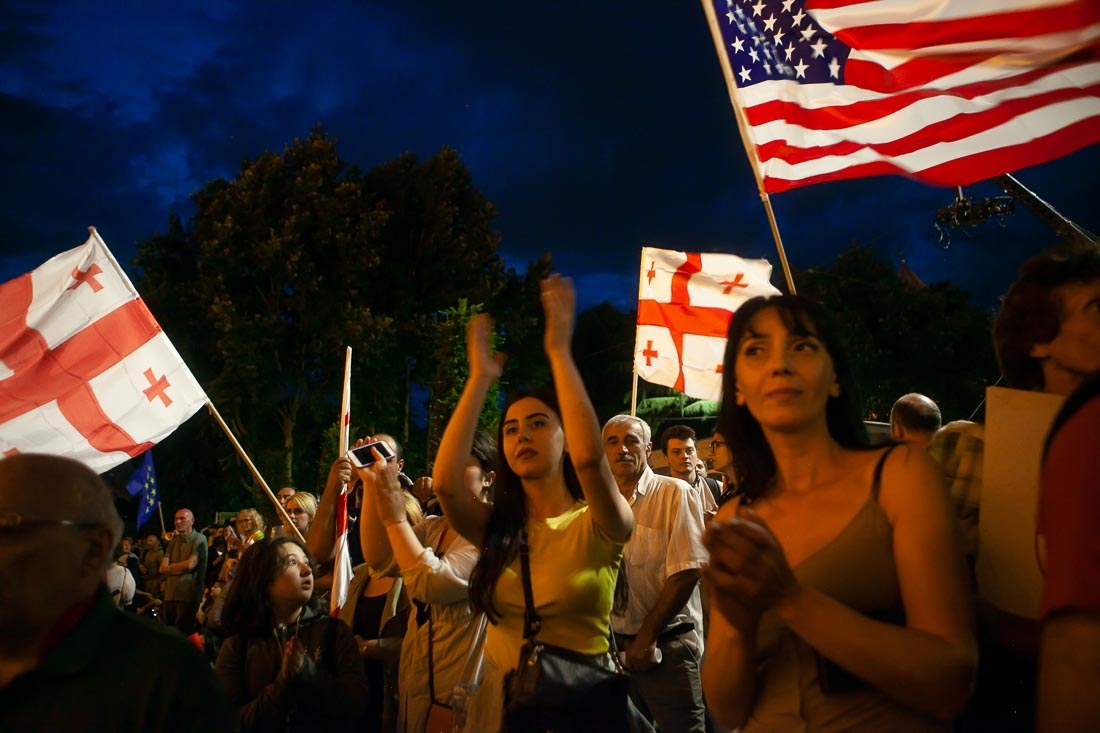 As Georgia finds itself in the deepest crisis with Russia since the 2008 war between the two countries, Tbilisi’s closest ally, the United States, has been conspicuously quiet.

The Kremlin has banned flights to Georgia, asked tourists not to visit the country, and has threatened further economic sanctions. The Russian media is full of tales, some exaggerated and others entirely fictional, about rising Russophobia in Georgia, and Russian diplomats have warned darkly, if vaguely, of “war.”

Publicly, the U.S. has barely responded. The embassy in Tbilisi issued a brief statement, following the outbreak of protests against the appearance of a Russian official in Georgia’s parliament and the government’s violent crackdown, calling for an investigation into the use of force against the demonstrations and for “dialogue among all political actors that will strengthen Georgia’s democracy.” Senior officials in Washington have not weighed in.

The American response is much more tepid than the shows of support to which Georgians had become accustomed.

“In the Bush administration you would get some senior State Department engagement, the Secretary of State or Deputy Secretary of State,” said Paul Stronski, a senior fellow in the Russia and Eurasia Program of the Carnegie Endowment for International Peace, a Washington, DC, think tank. “In the Obama administration, you’d get that, probably the vice president calling as well. But this stuff just doesn’t seem to interest the senior levels of this administration,” Stronski told Eurasianet.

But Washington has for years been a stronger booster of Georgia than Europe has been, pushing for NATO membership in the face of resistance from many Western European countries and carrying out extensive military training and equipping programs.

The mood among many in Tbilisi was captured by a member of parliament from the opposition United National Movement, Salome Samadashvili, who wrote a July 12 op-ed in the Washington Post headlined “Georgians are taking a stand against Vladimir Putin. Where is the West?”

“Georgians got spoiled a little bit, it had so much U.S. involvement in all issues related to Russia and security,” said Kornely Kakachia, director of the Georgian Institute of Politics, a think tank. Now, he told Eurasianet, “we feel kind of isolated.”

Washington’s support for Georgia reached its peak in the 2000s under President George W. Bush. Then-President Mikheil Saakashvili was a hero in Washington, an exemplar of the Bush administration’s “freedom agenda,” and the two leaders laid the foundation for the deep ties built over the subsequent decade. After the 2008 war and the attempted U.S. “reset” with Russia, the Obama administration took a more cautious approach rhetorically but for the most part continued its predecessors’ policies.

Under President Trump, the picture is more chaotic. The military relationship has continued to be strong; in 2017, the U.S. finally acceded to a longtime Georgian request for American anti-tank weapons. But Trump also has tried to build a relationship with his Russian counterpart, Vladimir Putin, and has been reluctant to publicly criticize Russia, which Georgians consider an existential threat to their security.

“Because of the unclear situation in DC, Georgia is not at the top of the priority list and that makes Georgians a little bit nervous,” Kakachia said.

“There is support in the United States for Georgia, but I think in terms of priorities it’s fallen a little bit down the ladder,” said a former Obama administration official, Michael Carpenter, in a July 14 interview with Al Jazeera. Other foreign policy priorities including Ukraine, Venezuela, North Korea and Syria “have displaced Georgia from the leading position that it had maybe 10 years ago.”

There also is a growing realization in Washington that the U.S.’s more assertive stances against Russia in the past not only were ineffective but often backfired. Stronski contrasted the strong U.S. support for Ukraine’s Maidan protests, in which some “very unfortunate statements” by U.S. officials helped Moscow paint the events there as a geopolitical threat, to the more measured responses to protests last year in Armenia and this year in Kazakhstan.

“Russia has already taken a step back and started to at least talk about deescalating,” Stronski said. “Letting Georgia and Russia work this out while keeping the quiet pressure on Georgia on the domestic democratic front is, I think, important. The U.S. jumping right into these things is not always helpful.”

Carpenter’s intervention helped Russia try to paint the events in Georgia as being driven by the U.S. “We have fears that in this case our American colleagues are also trying to do everything possible to prevent Russia and Georgia from normalizing their relations,” Russian Foreign Minister Sergey Lavrov said on June 25. Lavrov referred specifically to Carpenter’s visit, saying that the American “worked actively not only on the sidelines but also spoke publicly urging [Georgia] not to get carried away with developing ties with Russia."

Washington has in fact generally been supportive of the attempts by the Georgian government, following Saakashvili’s departure in 2013, to normalize relations with Moscow, Stronski said. “The U.S. has become more nuanced, recognizes that these countries are not going to change their geographies and that they need to figure out how to deal with Russia. So deescalating with Russia is not a bad strategy and that’s what [the ruling party] Georgian Dream was trying to do,” he said.

“I understand that there are some constraints [against Washington] because Russia already has paranoia, they already blame the United States for the recent events,” Kakachia said. “And if there was some statement or shuttle diplomacy [from the U.S.] the paranoia would go even higher.”