Amid Heavy Fighting, Azerbaijan Claims "Liberation" Of Some Karabakh Territory 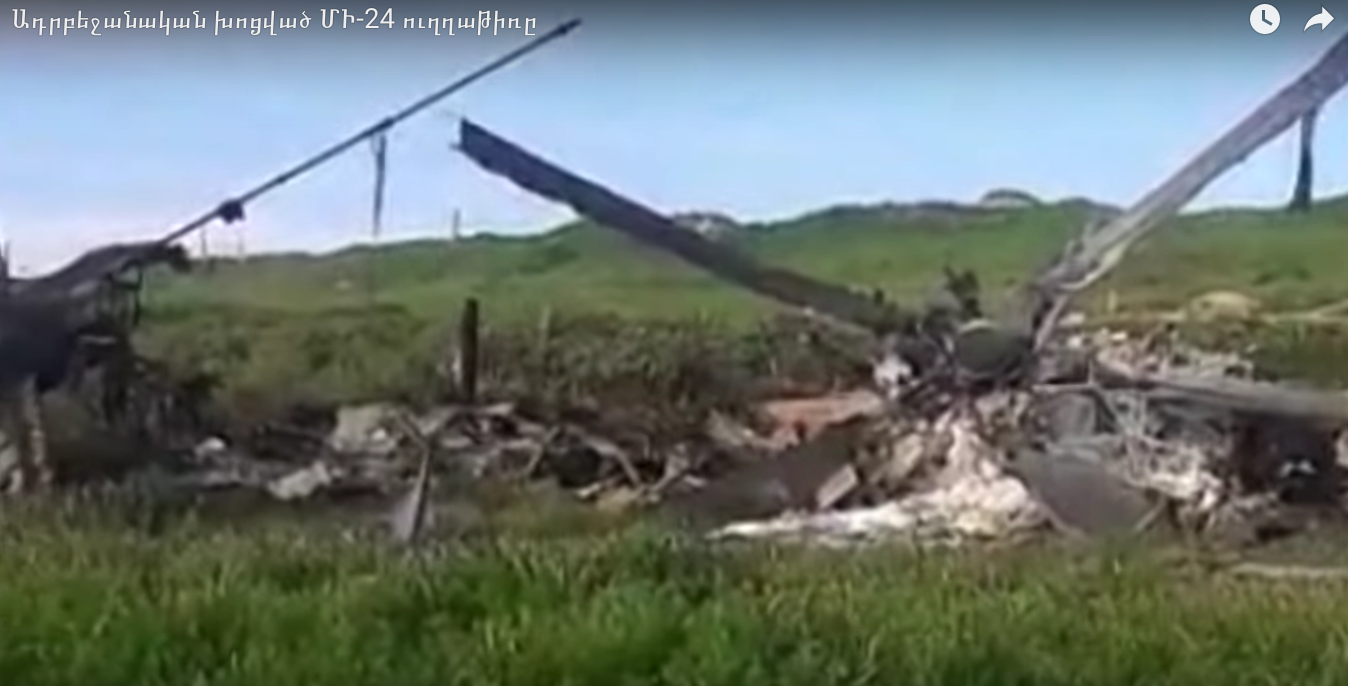 A screenshot of a video released by the de facto "defense ministry" of Nagorno Karabakh purporting to show the wreckage of an Azerbaijani helicopter shot down by Armenian forces. (source: https://www.youtube.com/watch?v=NqatFUgMFxM)

Azerbaijan's military claims to have "liberated" some territory in Nagorno Karabakh after the heaviest fighting in years broke out between Azerbaijani and Armenian forces over the disputed territory.

Fighting that broke out overnight April 2 has already resulted in an unprecedented death toll, with Azerbaijan confirming 12 of its soldiers killed and Armenia 18 of its soldiers, as of Saturday night local time. That makes this by far the deadliest outbreak of fighting since the two sides signed a ceasefire in 1994 (the previous worst episode was in 2014 when ten soldiers were killed over a three-day period).

Beyond that, there were claims and counterclaims from the opposing sides of many more enemy soldiers killed and various equipment destroyed. The fog of war, dense in any conflict, is particularly impenetrable in Karabakh, where there are no independent sources of information.

The most dramatic claim was the Azerbaijan Ministry of Defense's announcement that it had "liberated" some territory previously held by Armenian forces, naming the areas of Aghdere, Tartar, Aghdam, Khojavend, and Fuzuli.

"In a short period of time, as a result of a rapid counterattack by the Azerbaijani armed forces the front line of the enemy, built up for years, was penetrated in several sections, and several strategic heights and populated areas with strategic significance were cleansed of the enemy," the MoD said.

The line of contact between the two armies has stayed fairly static and so a shift in that line would be a significant development, even if these areas aren't especially strategically significant. But this claim will be easy to verify or disprove; as of this writing that hadn't happened.

It's remarkable that this outbreak of violence happened while the presidents of both Armenia and Azerbaijan were out of the country, in Washington. Most of the immediate analysis suggested that what probably happened was that a small provocation got out of control due to the heightened tension along the border.

"The problem is that the line of contact is so militarized now – there is all these heavy weaponry on either side, including air crafts, drones, and helicopters being used- that a lot of destruction can be done very quickly", said regional expert Tom de Waal in an interview with RFE/RL.

Also noteworthy is the response by Russia and its post-Soviet military bloc, the Collective Security Treaty Organization. While Armenia is a CSTO member and Azerbaijan isn't, Armenians have consistently complained that the CSTO has failed to support Armenia in its conflict with Azerbaijan.

But the CSTO's statement this time explicitly blamed Azerbaijan: "Everything should be resolved through negotiations. The actions of the Azerbaijani side in this case will lead to an exacerbation of the situation and to conflict," said Vladimir Zaynetdinov, the CSTO's press secretary.

There were no reports of further clashes as Saturday progressed.