The Pentagon program would give more than $100 million to help Baku improve its maritime security against threats from Tehran. 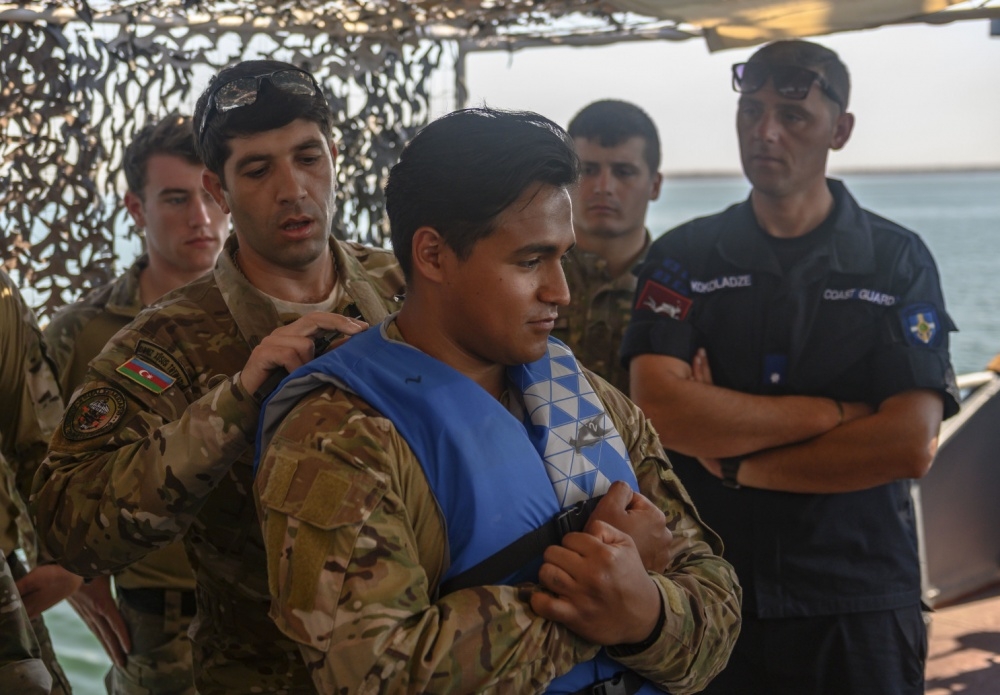 As the U.S. has ratcheted up diplomatic and military pressure on Iran, it has been quietly offering neighboring Azerbaijan more than $100 million in military aid. The money appears aimed at countering threats from Tehran.

The U.S. Defense Department allotted $58.6 million in fiscal year 2018 and $42.9 million the following year to Azerbaijan’s border and customs services, according to Pentagon reports to Congress obtained and published by Security Assistance Monitor (SAM), a Washington, D.C., watchdog.

Moreover, the Pentagon has not released all the budget information for the program for fiscal year 2019, meaning that the real figure spent on the program this year could be well over $42.9 million, the director of SAM, Christina Arabia, told Eurasianet.

The money comes from the Pentagon’s main training and equipping fund, which is subject to looser oversight than the larger State Department-run military aid programs. Over the last two years Azerbaijan was the third-largest recipient of aid from that program, behind only Lebanon and Jordan, “both of which are major strategic U.S. counterterrorism partners,” Arabia said. It’s not clear if the aid was actually delivered. Even if the aid wasn’t delivered, “the fact that DoD is even notifying Congress” of the program “is hugely significant because it went from receiving no aid through this program to being the third-top recipient in” fiscal year 2019, Arabia said.

Both sides, however, have been very quiet about the aid. Recent formal policy statements about U.S. military programs in the area have not mentioned Azerbaijan or the Caspian Sea at all. The Azerbaijan Ministry of Foreign Affairs did not respond to a request for comment.

In response to written questions about the aid program from Eurasianet, the U.S. Embassy in Baku issued a brief statement: “The United States engages in defense and security enhancement programs, to include border security and counter-proliferation efforts, with willing partner nations around the world.”

Over the years Azerbaijan has gotten a variety of aid from the U.S. to build up its naval and coast guard forces on the oil- and gas- rich Caspian Sea. The Caspian Guard program in the early years of the “war on terror” helped train Azerbaijani naval special forces. The U.S. also has donated second-hand patrol boats to Azerbaijan, as well as to Kazakhstan and Turkmenistan. But the dollar figure on this new aid program is significantly higher than anything the U.S. has spent before.

From the American perspective, the Caspian Sea is particularly strategically sensitive because it borders Iran, and the U.S. has long quietly worked to help Azerbaijan stand up for itself against the significantly stronger Iranian Caspian military presence. A fascinating series of Wikileaked U.S. diplomatic cables described a tense 2009 standoff between Iranian and Azerbaijani vessels, and demonstrated the U.S.’s deep involvement in advising Baku on how to resolve the situation and more generally in helping Azerbaijan with its maritime security.

While the documents justifying the new aid don’t explicitly cite Iran, there are several elements that point to a focus on that perceived threat. The fact that the Caspian is a closed sea means the potential threats are already limited. This funding is presented as part of the U.S. European Command’s “Southern Border Security” program, a rubric which would fit Iran and no other of Azerbaijan’s neighbors. The receiving agencies are identified as the border control and customs agency offices in Astara, a coastal Azerbaijani city on the border with Iran.

The timing of the new aid package is noteworthy because while U.S.-Iran tensions have spiked since Donald Trump became president in 2017, Azerbaijan-Iran relations are enjoying a period of relative calm. The signing last year of an agreement to delimit the boundaries of the Caspian Sea removed one persistent irritant. And since President Hassan Rouhani took over from his more Islamist predecessor, Mahmoud Ahmadinejad, promotion of Shiism abroad – previously one of Baku’s biggest complaints against Tehran – has “become secondary,” wrote Azerbaijani analyst Azad Garibov in a recent piece for the Eurasia Daily Monitor. “[T]he major problems that had generated mutual suspicions and kept bilateral relations strained for most of Azerbaijan’s post-independence history have recently been largely resolved,” Garibov wrote.

That thaw also has been reflected in the bilateral military relationship. Two years ago, Iranian and Azerbaijani warships first began paying friendly calls to each other’s ports. That practice has continued this summer and on July 28 two Iranian corvettes arrived in Baku as part of a friendly international naval competition.

The new funding package is aimed at “counter[ing] transnational threats” and “help[ing] Azerbaijan’s stability by helping its security forces develop the capacity to secure its borders, detect and prevent terrorist operations, counter WMD proliferation, and respond to crises,” David Trachtenberg, deputy undersecretary of defense for policy, wrote in a report to the House Committee on Foreign Affairs. The report was obtained by SAM and provided to Eurasianet.

The money is earmarked for vehicles including 15 high-speed boats, 14 “underwater target detection” systems, 25 pickup trucks, and 34 all-terrain vehicles. The package for Azerbaijan is to include communications equipment including radios, naval radars, and transponders for the Automatic Identification System (a universal tracking system for ships). It also earmarks funds for training on “underwater surveillance.” It does not include anything that would be classified as lethal. The U.S. also will maintain the equipment for two years, after which Azerbaijan takes responsibility.

Analyst Emil Sanamyan noted in a blog post, however, that some border guard forces have been involved in fighting with Armenia. Sanamyan was the first to publicly identify the Azerbaijani funding, and noted that while Azerbaijan has been getting a big boost the U.S. has cut its military aid to Armenia.

Sanamyan’s post occasioned some discussion in the Armenian and Azerbaijani press. “The strengthening of Azerbaijan’s control over its land, sea, and air borders meets the strategic interests of the U.S., whose companies have invested many billions of dollars in oil and gas projects in the Caspian, and the U.S. military conducts transit to Afghanistan via Azerbaijan,” said a member of Azerbaijan’s parliament, Rasim Musabeyov, the news website 1news.az reported. Musabeyov said the key takeaway was the strategic interest from Washington toward Azerbaijan: “For Azerbaijan what is important is the very fact of the aid and its source, rather than its amount.”

Musabeyov also claimed that a recent uptick in ceasefire violations between Armenia and Azerbaijan was related to this funding program: “I guess that the reason for this activity is so that the Armenian lobbyists in the U.S. Congress have a reason to disrupt this large-scale ($100 million dollar) American aid to Azerbaijan’s border forces.”

Russian military expert Pavel Felgenhauer said that the aid is more oriented toward law enforcement and would not necessarily be useful in a military conflict with Iran. But he said that Azerbaijan was benefiting from the growing U.S. attention toward Iran. “American-Iranian relations have worsened quite quickly, so Azerbaijan finds itself in Washington’s focus and Armenia, not. Armenia is seen, probably, as an Iranian ally,” Felgenhauer told the website Moscow-Baku.