“I was born here, I spent the best days of my life here. I don’t want to leave, but I’m afraid that the situation will just keep getting worse.” 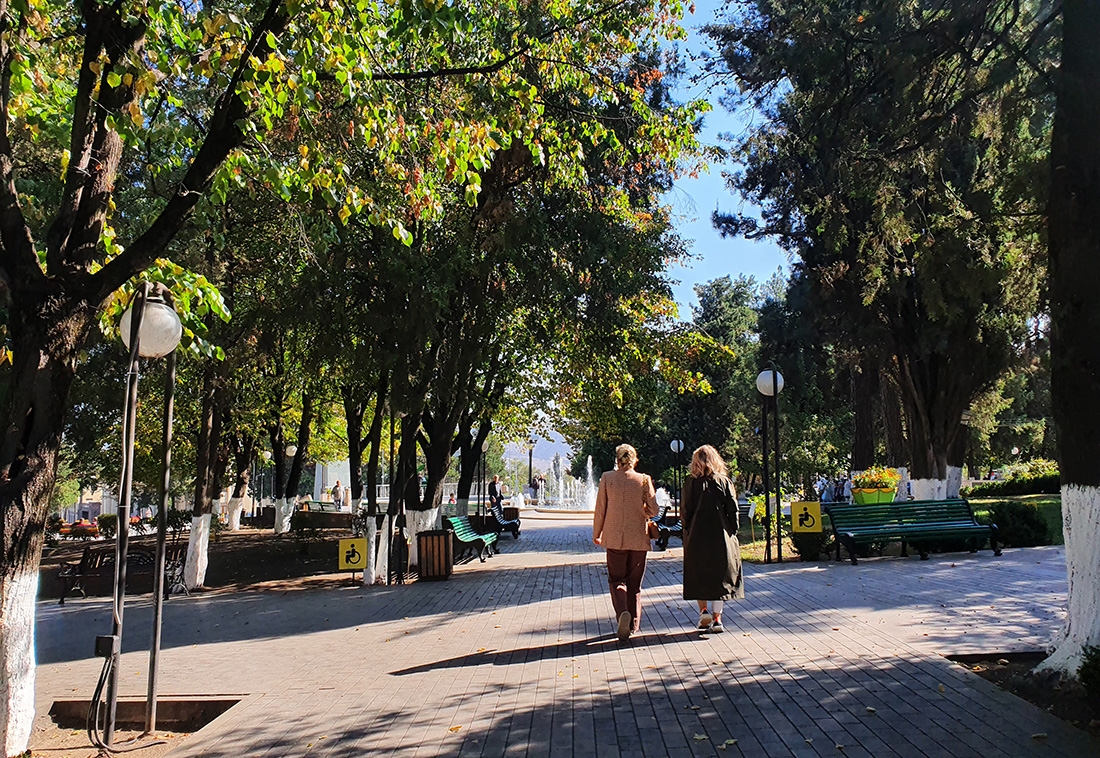 The apparent normalcy on the streets of Stepanakert hides a deep undercurrent of uncertainty. (Lilit Shahverdyan)

On the surface things look normal in Stepanakert, the de facto capital of Nagorno-Karabakh. After suffering heavy shelling in the war two years ago the city has come back to life, its sidewalks busy with pedestrians and streets congested with cars. Schools are overflowing, as families who were forced to flee from areas Armenians lost during that war have moved to Stepanakert. New cafes and restaurants have opened since the war.

But the apparent normalcy hides a deep undercurrent of uncertainty. The leaders of Armenia and Azerbaijan have said that they expect to reach a final peace agreement by the end of the year. The signs are increasingly suggesting that, as part of that deal, Armenia is willing to cede control of Nagorno-Karabakh to Azerbaijan.

For the ethnic Armenian population of Karabakh, it is an unacceptable prospect. But despite the precarity of their situation, residents are trying to maintain their optimism.

“I don’t really believe that Artsakh will become part of Azerbaijan,” Gayane, a 45-year-old worker in IT, told Eurasianet. (Artsakh is an alternative Armenian name for Karabakh.) “I have nowhere else to live, and I love Stepanakert, so why would I ever want to leave?” she asked. 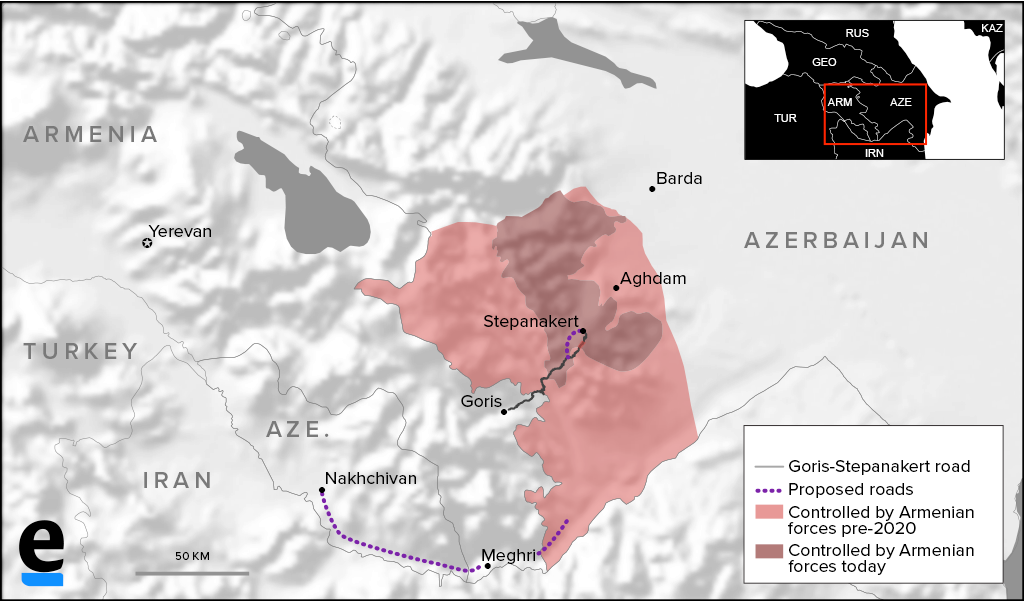 Political opposition to a potential handover has been fierce. While there have been indications of such a move for months, resistance from people in Karabakh was galvanized by a September 14 statement by Armenian Prime Minister Nikol Pashinyan in which he made his most explicit allusion yet to the fact that he was ready to sign an agreement giving up Armenian control of Karabakh.

A series of protests drew thousands to Stepanakert’s central Renaissance Square, where they demanded the government refuse to sign a peace deal under the slogan “Unity, Struggle, Victory.”

“As a result of their [Armenian] destructive politics, we [Armenians of Karabakh] are turning into an ethnic minority in Azerbaijani territory,” Tigran Petrosyan, an opposition leader in Karabakh, told Eurasianet. “This is the red line that we should never cross. We voiced our demands, and we are expecting proper answers.”

Shortly after Pashinyan’s statement, a Karabakh delegation headed by de facto leader Arayik Harutyunyan went to Yerevan to meet with senior Armenian officials; the Karabakh officials told local media that their intent was to “clarify” a September 6 agreement made in Prague between Pashinyan and Azerbaijan President Ilham Aliyev in which the two pledged to recognize one another’s territorial integrity.

Armenian President Vahagn Khachaturyan vowed that no documents would be signed behind Stepanakert’s back and Karabakh’s de facto Foreign Minister Davit Babayan reiterated that “Artsakh will never be part of Azerbaijan.”

In an October 20 interview with local television Harutyunyan further clarified Stepanakert’s position, saying that he wanted to maintain the status quo of de facto independence for Karabakh protected by Russian peacekeepers.

"International mediators are focused on the Armenian-Azerbaijani peace negotiations and they are neglecting the issue of Nagorno-Karabakh,” he said. “I have to say it directly – they do not suggest beneficial solutions for us. But we will continue to fight within the framework of self-determination norms.”

Meanwhile, after the Prague meeting, Aliyev tweeted “the Armenians of Karabakh are Azerbaijani citizens” and that “we are not going to discuss their fate or future life with any country, including Armenia.”

To the Armenians of Karabakh, that uncompromising position, and Aliyev’s repeated refusal to allow any sort of autonomous status for Karabakh inside Azerbaijan, has convinced them that Baku has no intention of letting them live peacefully in their homes and that their only choice will be to flee. They say Azerbaijan’s strategy amounts to ethnic cleansing.

Mistrust continues to grow: Even as the negotiations between the two sides progress, videos have emerged of summary executions of Armenian captives by Azerbaijani soldiers. To people in Karabakh, the videos have only strengthened their conviction that it would be impossible to live in Azerbaijan.

“Seventy years of integration during the Soviet period only proved that we cannot live together, it’s impossible,” Gegham Stepanyan, the human rights ombudsperson of Karabakh, told Eurasianet. “We should exclude from negotiations the possibility of integration. International bodies should also accept our position.”

American and European officials have instead been voicing the position that the issue is the “rights and securities” of the people of Karabakh, without any reference to status. Armenian Foreign Minister Ararat Mirzoyan said on October 5 that one issue in the negotiations was “forming an international mechanism to ensure dialogue between Stepanakert and Baku,” again suggesting a fate for the Karabakh Armenians inside Azerbaijan.

“For us, the Stepanakert-Baku dialogue suggests discussing Karabakh’s status from two sides, but from Azerbaijan’s point of view, it’s just a dialogue with a part of its country,” Stepanyan said. “That difference of perspective is not going to allow us to continue discussions in this format.”

Meanwhile, Russian negotiators are reportedly working on a deal that would postpone a resolution of Karabakh’s status, potentially giving its residents a reprieve.

But to many Karabakh Armenians, the Russians have become an untrustworthy partner. A 2,000-strong peacekeeping force now provides security for residents, but since Russia launched its war in Ukraine, Azerbaijan appears to have been able to push the boundaries to a greater degree, taking additional slices of territory under the noses of the peacekeepers.

That has resulted in a growing public backlash against the Russian presence, which has only become stronger as Moscow has been passive in the face of a large-scale Azerbaijani attack on Armenian territory in September.

Young people, especially, who don’t have the positive association many older residents do with the Soviet era, have become disillusioned with the Russians.

“The Russian government is like white Turks,” a 21-year-old waitress in a cafe in Stepanakert, who asked not to be named, told Eurasianet. “I don’t have any hopes for them. There were many cases when Russians should have been doing their peacekeeping duties but they did nothing. We’d rather not have any expectations from them after all.”

One new source of hope is the recent appointment of Ruben Vardanyan, a Russian-Armenian billionaire, to the position of state minster, akin to prime minister. He announced his intention to renounce his Russian citizenship and move to Karabakh in September, and was offered the state minister position in early October. He formally accepted it on October 20.

While it is unclear what impact Vardanyan might have on the course of the negotiations and Karabakh’s fate, many here believe that such a powerful figure – he is known to be close to Russian President Vladimir Putin – would not have moved to Karabakh and taken on the role if he thought the situation were hopeless.

“It gives me some hope that the situation is not so bad,” Gayane, the IT worker said.

The Karabakh government, backed by the Armenian government, undertook a massive construction program following the war to provide housing and infrastructure for the remaining population, and implemented programs aimed at helping the displaced so as to maintain the territory’s Armenian population.

But now those displaced are contemplating the prospect of being displaced again.

“I have no desire to start building a life again in Artsakh; it’s all uncertain and precarious,” one resident, 25-year-old Vrej, told Eurasianet. He fought in the 2020 war and was injured, and then was forced to relocate when Armenian forces lost control of his hometown of Hadrut. Now he lives in Stepanakert doing computer repairs to make a living.

“I do not receive enough assistance from the government,” he said. “If I could afford it, I would have already left the country. I just don’t have the opportunity.”

Other young people don’t want to leave, but are worried about the feasibility of staying.

“I was born here, I spent the best days of my life here,” said the waitress. “I don’t want to leave, but I’m afraid that the situation will just keep getting worse.” Her friend, 17-year-old Albert, agreed.