Meanwhile, Azerbaijan released two truck drivers whose arrest sparked the tensions, while Iran agreed to forbid trucks from entering Karabakh from now on. 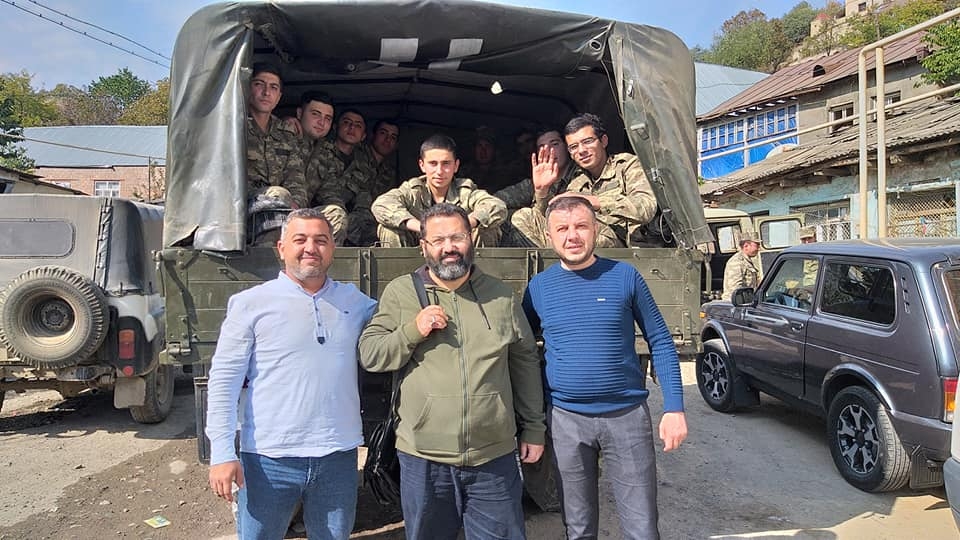 Azerbaijan’s State Security Service has detained several Shiite clerics, including a well known imam, as tensions with its southern neighbor Iran continue to fester. The clerics and their families themselves reported their detentions, while Azerbaijani officials have remained silent.

In an October 19 Facebook live broadcast, cleric Ilgar Ibrahimoglu reported that law enforcement officers had come to his house. In his statement, he suggested his detention had a political underpinning.

“Whatever is happening today, we hope the waters will clear,” he said in an apparent reference to the current tension with Iran.

Religious members of Azerbaijan’s Shiite majority have long been under suspicion from Baku’s strongly secular authorities; most of the country’s political prisoners are religious activists. The clerics’ arrests are an indication that pressure may be further tightening as the conflict with Tehran simmers.

It was not immediately clear why Ibrahimoglu had been detained, though speculation in Azerbaijan immediately turned to Iran, as the cleric is openly pro-Iranian.

Prominent journalist Rauf Mirgadirov argued on Facebook that while, as a Shiite cleric, Ibrahimoglu had made statements sympathetic to the Iranian theocratic system, other clerics – notably the official state Islamic leader, Allahshukur Pashazade – had gone even further.

“There was a time when our Sheikh-ul-Islam almost declared jihad against the West because of his ‘colleagues’ who ruled Qom and Tehran, but no one said anything to him. I am sure that Ilgar Ibrahimoglu is a loyal son and citizen of Azerbaijan,” Mirgadirov wrote.

A few hours later, in the middle of the night, Ibrahimoglu again appeared on Facebook live and reported that he had been released after “lengthy and detailed discussions.” He added that he had been treated respectfully and professionally.

“Since all the questions addressed to me were answered, I was released,” he said without specifying what criminal case was being discussed. At the end of the broadcast, Ibrahimoglu said that for several days he would not have access to the phone and asked viewers not to contact him by telephone or via social networks.

Ibrahimoglu was the imam of Baku’s main Juma mosque until 2017; he now is the editor of the religious news website deyerler.org and heads the NGO Center for the Defense of Freedom of Religion and Conscience.

A week before his detention, Ibrahimoglu gave an interview to Musavat TV, criticizing Armenians for what he described as a long list of perfidies against Muslims throughout history and saying they now will again betray Iran.

“They [Armenia] will abandon Iran. They are just with them right now. And because of the embargo situation, Iran is forced to use every option,” Ibrahimoglu said.

Ibrahimoglu was not the only Shiite cleric detained that evening. The State Security Service also detained four other men, all members of the public union “Assembly of Clergy of Azerbaijan” and employees of the religious website maide.az; one is an editor of the site.

Relatives of the detained men told RFE/RL’s Azerbaijani service that State Security Service officers had searched their homes and seized laptops and phones. Two of them had already been questioned that morning and freed, but detained again several hours later.

The State Security Service did not issue any press releases nor did they answer phone calls journalists made to inquire about the arrests.

Unlike Ibrahimoglu, the other four clerics remained in custody as of October 21.

The arrests were likely connected to the diplomatic tension between Azerbaijan and Iran, said longtime opposition politician and analyst Zardusht Alizadeh in an interview with the news agency Turan.

“As a result of these tensions, people who are loyal to Iran, defend Iran, admire Iran, love Iran and speak positively about Iran are being arrested,” Alizade added.

Attempts to tie Azerbaijani Shia clerics to the Iranian authorities are “dangerous,” wrote human rights activist Anar Mammadli on his Facebook page in response to the detentions.

“By this logic, Sunni religious leaders can be linked to the special services of countries such as Saudi Arabia, Turkey, Pakistan, Qatar, and Christian groups can be linked to Western countries,” he wrote. “This trend promises unfavorable prospects for the country’s future and has nothing to do with secular governance.”

Meanwhile, on the morning of October 21 Azerbaijan’s State Customs Committee announced that they were extraditing the two Iranian truck drivers whose arrest sparked the current tensions. That followed a report the day before that the Iranian government will now bar Iranian trucks from entering Karabakh.

Correction: A majority, not a minority, of Azerbaijani Muslims are Shia.