Amid vaccine skepticism, Armenia opens up

The country has taken the rare step of offering the vaccine to anyone, including foreigners, without registration. But the number of takers is still low. 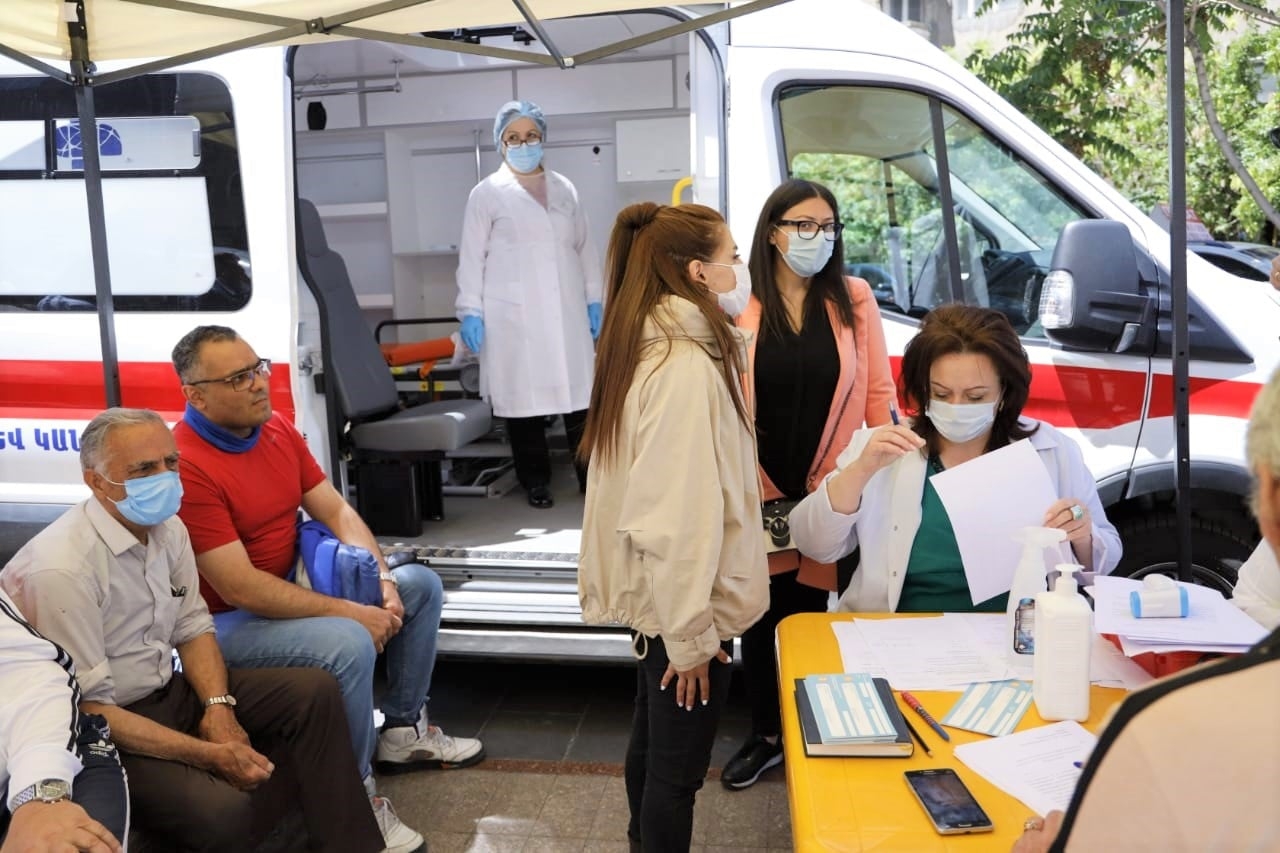 While much of the world waits in vain for COVID-19 vaccines, in Armenia they are available to anyone who shows up.

On Yerevan’s central pedestrian street Northern Avenue, a Ministry of Health-run station has been offering one-stop vaccinations since May 5. It’s free of charge, doesn’t require registration, takes 10 minutes – and yet on a recent visit by Eurasianet to the site there were only a handful of takers. And most of them were foreigners, including Poles, Iranians, Russians, and Chinese.

“Armenians aren’t enthusiastic for the vaccine because the media and politicians are doing black PR against them,” said Armos Martirosyan, 32, one of the few Armenians who was at the site. “I’m a socially responsible person, that’s why I’m here.”

As in many parts of the world, conspiracy theory-fueled vaccine skepticism is widespread in Armenia. Armenia, though, has taken the unusual step of making the vaccine freely available, including to foreigners, at a network of mobile clinics at several cities around the country. “The goal is to make it easy and accessible for people to get vaccines,” a ministry representative, Gahane Sahakyan, told reporters when the clinics were launched.

Still, demand at the mobile centers is low and a month into Armenia’s vaccination campaign, the country has given first doses to only about 12,000 people, representing about 0.4 percent of the population. (The Health Ministry told Eurasianet that its data does not separate out the number of foreigners who are getting vaccinated in Armenia.)

The numbers are well below Armenia’s neighbors in the Caucasus. As of May 13, Georgia had administered over 77,000 total shots, including about 13,000 second shots. Azerbaijan reported administering 1,727,510 shots as of May 11, including 713,015 second shots.

There are plenty of shots to give out: Armenia received 100,000 doses of the Chinese CoronaVac vaccine on May 1, donated by the Chinese government. The country also has received 24,000 doses of the British-Swedish AstraZeneca vaccine through the COVAX program and about 31,000 of Sputnik V from Russia.

Due to AstraZeneca’s well publicized troubles – it was briefly recalled in several European countries over concerns that it could cause blood clots and a nurse in Georgia died reportedly of an allergic reaction to the vaccine – it is most Armenians’ last choice.

At the Northern Avenue station, two middle-aged women wearing masks – a rarity in Armenia – approached the desk and asked which vaccines were available. Finding out that it was only AstraZeneca, they angrily walked away. “We don’t want AstraZeneca, it kills people,” one woman, who didn’t want to be identified, told Eurasianet.

While Sputnik V is occasionally available at the mobile clinic, supplies had run out. Armenian health authorities have reserved Sputnik V for particular cases – medical workers, employees of care facilities, those with medical conditions that put them at higher risk of COVID-19.  AstraZeneca is being given to anyone over 18 who wants it.

“If there was Sputnik I would take it, but they only have AstraZeneca here,” said Shahria Karimi, 42, an Iranian who was lined up to get the shot.

Karimi arrived from Iran two days before on vacation and happened upon the mobile clinic. “It’s so easy, in Iran like most of the world we have to wait for shots, since there are priority groups,” he said. “In Iran maybe I could get a vaccine in a month. I don’t know why Armenians don’t take it.”

Politicians and public figures have lined up in an effort to convince the public that the vaccination is safe and desirable. Prime Minister Nikol Pashinyan was vaccinated on May 3 but hasn’t said which vaccine he got. In a session of parliament, one member asked him which one he took and he demurred: “I can’t tell which one I took but one of the deputy prime ministers got Sputnik V and the other one, AstraZeneca. I hope one of the MPs here will get the Chinese vaccine,” he said, to laughter. But he added: “I want to assure you, if the Ministry of Health has allowed any vaccine to be used here, it means it is good.”

Since the pandemic began Armenia has had a total of 220,217 cases and 4,291 deaths attributed to the virus.