What started out as Ukraine’s dissatisfaction with Georgia’s cautious stance on sanctions has grown into a major controversy filled with mutual accusations, insults, and conspiracy theories. 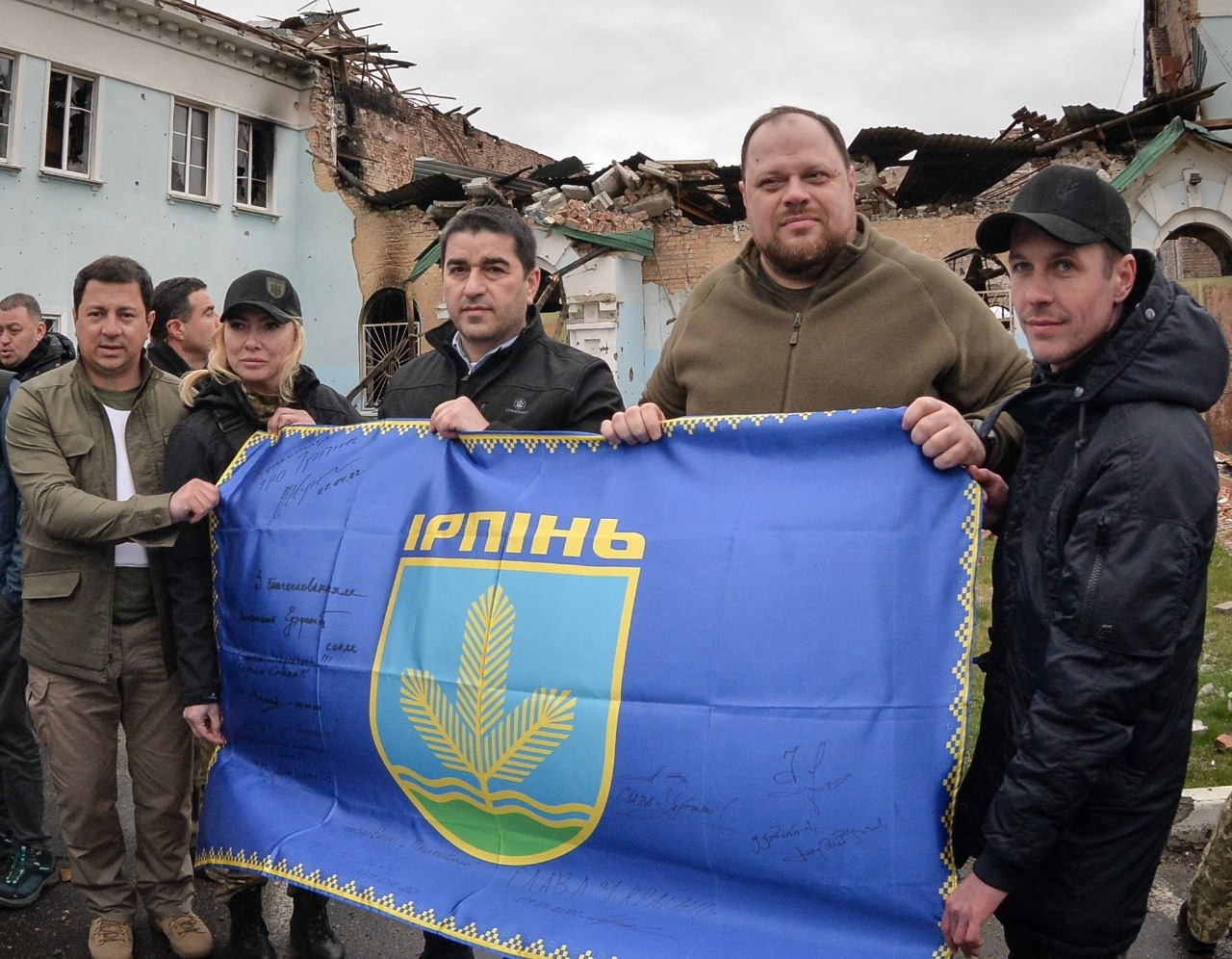 Ruslan Stefanchuk, the speaker of Ukraine’s parliament, showing his Georgian counterpart Shalva Papuashvili around the destruction north of Kyiv on April 16. (Ruslan Stefanchuk/Twitter)

While war rages between Russia and Ukraine, a different kind of fighting has been stealing the spotlight in Georgia: a bitter war of words between Kyiv and Tbilisi.

Georgia and Ukraine consider one another strategic partners, united in their striving for integration with the West and their struggles against Russia. But relations between the two governments have long been frosty. The discord centered around Georgia’s former president Mikheil Saakashvili, who is enemy number one of the current authorities in Tbilisi but until recently was a member of the Ukrainian government; he maintains influence and allies in Kyiv.

Things have only gotten worse from there. The criticism from Kyiv has grown into serious allegations that the Georgian government is acting in cahoots with the Kremlin and helping Russia evade international sanctions.

The leaders of Georgia’s ruling Georgian Dream party, for their part, have blamed the worsening relations on the malign influence of Saakashvili’s United National Movement (UNM), now the country’s largest opposition force, and the latter’s members and connections in Kyiv.

The rhetoric from Kyiv is consistent with Ukraine’s public diplomacy strategy around the world, to shame Ukraine’s foreign partners into providing more support for its defense against Russia. But it’s had particularly intense and complicated consequences in Georgia, where many Georgians feel themselves invested in the war and where popular support for Ukraine is strong and deep.

And Georgia’s sensitivity to Kyiv’s accusations of Russian collaboration – for which the Ukrainian government has not provided evidence – is further amplified by years of political polarization, where every critical issue is invariably reduced to the perpetual confrontation between the country’s two main political forces.

"Unfortunately Georgian-Ukrainian relations are a hostage to the domestic clash between Georgian Dream and the United National Movement,” Thomas de Waal, a senior fellow at Carnegie Europe and a longtime Caucasus analyst, told Eurasianet. “That’s primarily because Saakashvili is so well connected in Kyiv. The government in Tbilisi is basically pro-Ukraine but anti-Zelenskiy, while the Zelenskiy administration in Kyiv supports Georgia but dislikes its government."

Government in Kyiv, opposition in Tbilisi

After losing power in Georgia in 2013 Saakashvili moved to Ukraine, where he has held a series of high-ranking government posts under successive governments. Most recently, he had been serving as head of the National Reforms Council in Kyiv until making a dramatic return to Georgia last year by smuggling himself into the country ahead of elections and promptly getting arrested on multiple long-standing charges. He has remained behind bars since then.

Saakashvili is not the only Georgian from the previous regime who has found a safe haven and career opportunities in Ukraine and continues to maintain close contact with Kyiv. Another key figure is former Deputy Interior Minister Giorgi Lortkipanidze, who in March was appointed as deputy head of Ukraine’s counterintelligence. In December, he was charged in Georgia for aiding Saakashvili’s illegal border crossing.

“People who are in opposition in Georgia are in the government in Ukraine. This is a very strange situation, probably a unique one in world history,” Georgian Dream Chairman Irakli Kobakhidze said in March.

Georgia initially drew fire for its tepid response to Russia’s invasion of Ukraine, announcing that it would not impose its own sanctions against Moscow and at times conspicuously avoiding blaming Russia for the war. Tens of thousands of Georgians gathered in Tbilisi to protest their government’s passivity and were cheered on by Zelenskiy, who tweeted that Georgia’s citizens were “better than the government.”

The rancor deepened in early April when Ukraine’s Defense Ministry accused Georgia of aiding Russian smuggling in defiance of international sanctions. Tbilisi fiercely denied the allegations, arguing that Georgia has been abiding by international sanctions and demanding Kyiv produce proof for the accusations.

There is no available evidence suggesting Georgia is abetting sanctions evasion and the United States embassy in Tbilisi has repeatedly spoken approvingly of Georgia’s stance.

“No one is asking Georgia’s government to come up with bilateral sanctions if they don’t want to, if that’s not what they’ve decided they should do. Bilateral sanctions are for Georgia’s government to decide,” U.S. ambassador Kelly Degnan said in March. “What is expected of every country, my country, and every country that is standing against this Russian aggression is that there will be compliance with the international sanctions regime, and Georgia has always been a good partner in complying with international sanctions.”

But the tension over Kyiv’s accusations spilled over into a proposed visit by a Georgian delegation to Ukraine.

Georgian officials had been criticized for their failure to visit Ukraine, as did the leaders of many other allied countries, to show their support. On April 8, Ukraine’s embassy in Tbilisi said Ruslan Stefanchuk, the speaker of Ukraine’s parliament, had invited his Georgian counterpart Shalva Papuashvili to Bucha, the site of some of the worst Russian atrocities in the war.

But Georgian Dream Chairman Kobakhidze said that a high-level visit of a Georgian delegation to Ukraine would not take place until several preconditions were met, including for Kyiv to take back the smuggling allegations, return its ambassador to Tbilisi, and dismiss from government posts those Georgians facing charges in Georgia.

Kobakhidze’s remarks were widely criticized at home for being both unrealistic and insensitive, and in the end Papuashvili and the delegation, consisting of both opposition and ruling party deputies, still visited Ukraine, including Bucha.

After the visit, the two sides exchanged compliments: Stefanchuk said he was assured by Papuashvili that Georgia would in no way help Russia, while Papuashvili spoke about a “warm, friendly welcome” from his counterpart, sparking hopes about the ice finally melting.

But the opposite happened, and more criticism started coming from Kyiv.

The recording appeared to depict sanctioned Russian oligarch Vladimir Yevtushenkov offering a business deal – the nature of which was not clear from the conversation – to Ivanishvili, a billionaire who made his fortune in Russia before entering politics. The latter said he would refer the matter to Prime Minister Irakli Garibashvili.

The leak was seized upon in Kyiv. Ivanishvili “is a truly pro-Russian businessman-politician, who eagerly tries to conceal the fact that he gets instructions from the Kremlin and transmits them to the current Georgian authorities,” said David Arakhamia, a Ukrainian politician of Georgian descent who now serves as the head of the faction of Zelenskiy’s party in parliament and as a member of Kyiv’s negotiating team with Moscow. Arakhamia said he would ask EU and U.S. authorities to consider sanctioning Ivanishvili.

Arakhamia, who fled war in his native Abkhazia to Ukraine as a teenager in the early 1990s, is an enthusiastic Saakashvili supporter. He has emerged as one of the Georgian Dream’s bogeymen in Kyiv, whom they demonize as the key intermediary between the Ukrainian government and the Georgian opposition. Kobakhidze of the ruling party has darkly warned that the Georgian public would learn more “bad things” about Arakhamia once the war is over.

Georgian Dream officials defended themselves in various ways against the claims; Papuashvili initially called the recording a “montage” and then Kobakhidze said that, even if the contents were genuine, there was nothing scandalous in them. It remains unclear whether Garibashvili in fact met Yevtushenkov’s envoys.

In the meantime, Georgian Dream officials have been developing a new line of attack: that Saakashvili and the UNM represent a “party of war” set on dragging Georgia into the conflict.

Georgian Dream has long positioned itself as more levelheaded than Saakashvili, whom they blame for allowing Russia to invade in 2008.

Now, voices from Kyiv are regularly calling on Georgia to seize the opportunity of a bogged-down Russian military to retake its breakaway regions of Abkhazia and South Ossetia, which are defended by Russian troops. “If additional war fronts begin emerging for the Russian Federation, made possible due to its actions in the recent past, that would be very, very helpful for us,” Oleksiy Danilov, the secretary of Ukraine’s National Security and Defense Council, said on March 26.

Georgian Dream officials blame this on the UNM.

“Days ago, the Party of War had another visit to Ukraine,” Kobakhidze said two days after Danilov’s remarks. “The visit obviously went well, since it was immediately followed by open talks by high-ranking Ukraine officials about the expediency of opening a second front and moving the war in Ukraine to Georgia.”

But the idea has so far enjoyed little popularity in Georgia, even among UNM hardliners. Georgian Dream, meanwhile, has been criticized for overreacting to the desperate attempts of a country under attack to rally international support, as well as for indirectly suggesting that Ukraine was itself to blame for the Russian invasion. “If Saakashvili were in power today, they would make a second Mariupol happen here, that was the intention,” Garibashvili told media on April 27, referring to a Ukrainian city being flattened by the Russian military.

Georgian officials have defended their refusal to implement bilateral sanctions against Russia by arguing that the sanctions would have little effect, hurting Georgia more than Russia. It also has been providing humanitarian assistance to Ukraine and the Ukrainian refugees who fled to Georgia.

Public opinion appears roughly divided on the Georgian government’s response to the war.

One poll, released on March 15 by CRRC Georgia, showed that 61 percent of respondents thought Tbilisi should be providing more support to Ukraine. Another poll, released on April 27 by the International Republican Institute but also the result of surveys in March, found that more than half of Georgians considered their government’s support for Kyiv “sufficient” or “somewhat sufficient.” The nightly pro-Ukraine, anti-government demonstrations that initially attracted tens of thousands have since died out.

In the meantime, the sniping between the two capitals has only gotten more toxic. On May 1, Georgia faced another allegation from Ukrainian military intelligence, accusing it of being among the countries Russia was in talks with to try to evade sanctions.

Zelenskiy adviser Oleksiy Arestovych was asked in an interview about relations with Georgia and he dismissively referred to the Georgian authorities as “bunnies,” which set off yet another round of recriminations from Tbilisi.

Garibashvili was asked about the insult on April 30. “This person is himself an insult,” the prime minister responded.