Amid wave of femicides, Azerbaijan’s feminists come under attack

Azerbaijan’s feminist movement is small, but it has received an outsized public backlash for a campaign calling attention to the state’s responsibility to prevent domestic violence. 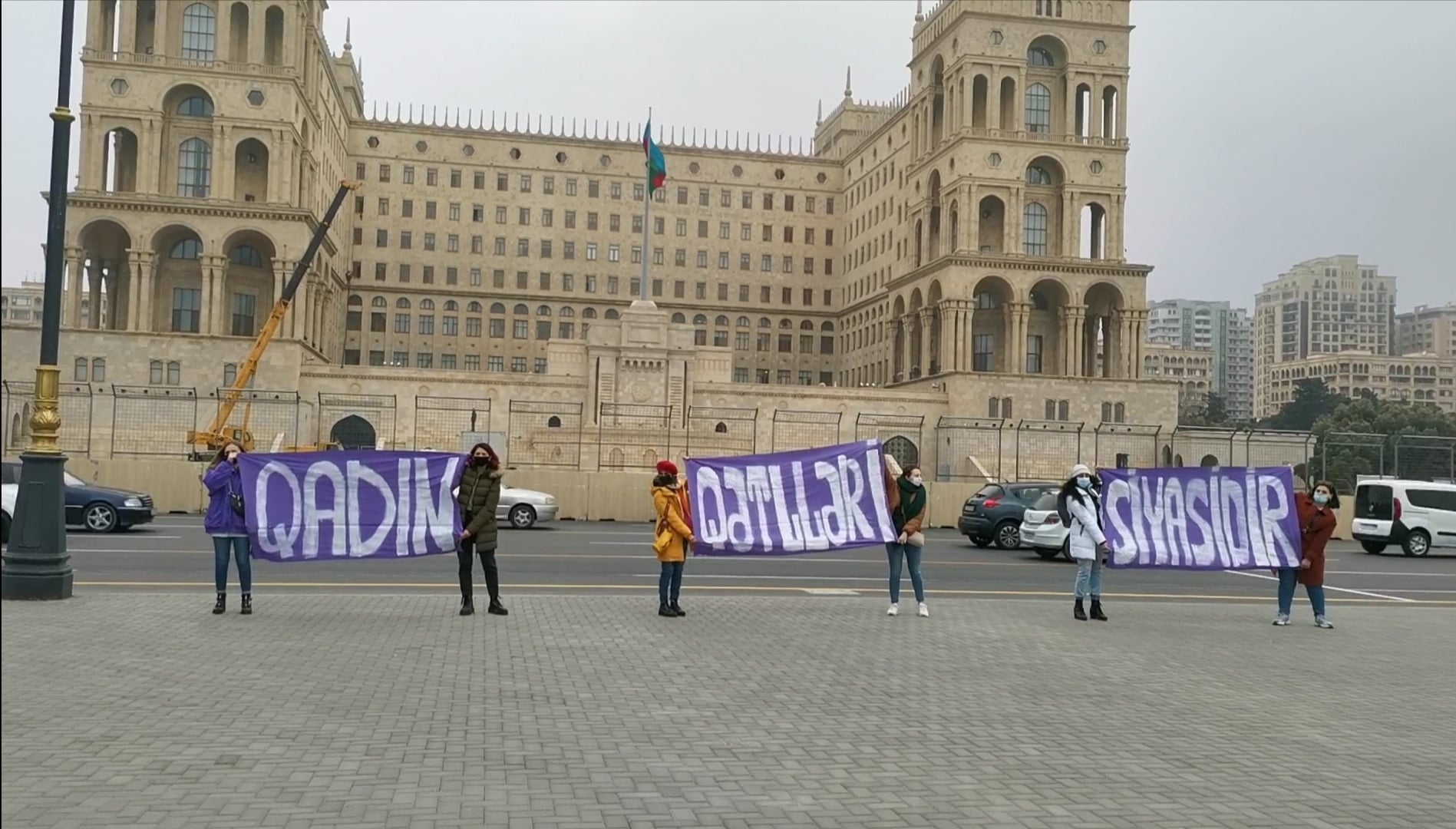 Activists in February protest in front of the government building in Baku, with signs reading "Femicides are political." (photo: Facebook, Gulnara Mehdiyeva)

For months, Sevinj Maharramova had been subject to regular, violent abuse at the hands of her husband. She sought help from the police, who failed to press charges. Ultimately, the 23-year-old mother of two returned to him in May so she could be with their children.

Women’s rights activists in Azerbaijan had tried to aid Maharramova, providing her with accommodation and finding her a job, while also trying to draw attention to the case and to get the state to act on her behalf.

On August 3, Maharramova was murdered. Her husband was detained and prosecutors opened a case on charges of deliberate murder.

The next day, a group of feminist activists held a small demonstration, throwing red paint at the door of the Khazar District Police Station in Baku, chanting “Sevinj’s murderer is the state.” Police detained the three activists.

The protest was targeted at “the inaction of the police,” feminist activist Vafa Nagi told Eurasianet. “Had the police done their job on time, Sevinj would be among us today.”

Maharramova’s murder has drawn attention to what activists describe as a growing crisis of femicide, or murders of women by their partners or relatives. In July alone, nine women were murdered by their partners or family members, according to a tally by activists. Three more women have been killed in August so far.

Feminist activists in Azerbaijan have been arguing that the blame for the problem lies with the government because the state doesn’t provide sufficient protection to victims of domestic abuse. They have been organizing under the slogan “femicides are political.”

Following Maharramova’s initial appeal to the authorities in March, police had conducted only “formal” investigations, said Gulnara Mehdiyeva, who had worked directly with Maharramova and was one of the detained feminist activists. Meanwhile, Mehdiyeva reported, Maharramova had been turned away from a shelter after another episode of abuse and the police encouraged her to reconcile with her husband.

Activists have been urging the government to ratify the 2011 Istanbul Convention -- a landmark international agreement aimed at preventing domestic violence -- saying it would protect Azerbaijani women as it puts the burden on prosecutors to investigate domestic violence even if the defendant withdraws charges.

But Turkey -- Azerbaijan’s closest ally -- abruptly withdrew from the pact in April, to the cheers of Azerbaijani pro-government media, suggesting that the chances of Baku formally adopting the convention are slim.

The authorities have denied that the state has any responsibility for Maharramova’s death. The spokesperson of the Ministry of Interior Affairs, Elshad Hajiyev, told media that the police had done everything they could within the framework of the law.

Following the murder, Azerbaijan’s General Prosecutor’s Office released data showing that 33 women in the country had been killed in the first half of 2021. The office also noted in a statement that “the biggest barrier in fighting femicides is silence” and encouraged women in danger to phone a hotline.

Foreign embassies also have weighed in. The United States embassy posted a note endorsing the General Prosecutor’s “emphasis on the importance of elimination of domestic violence in Azerbaijan.” The British embassy expressed “concern” over the killing of Azerbaijani women, including Maharramova, and called on the Azerbaijani government to sign the Istanbul Convention.

But there has been a significant backlash against the claim that “femicides are political.”

Pro-government MP Fazil Mustafa told local news site Cebhe.info that femicides are a “cultural problem” connected to women’s education level and their ignorance of their rights. Sardar Jalaloglu, chairman of the opposition Azerbaijan Democratic Party, went further, calling the slogan “nothing other than foolishness” in an interview with the same outlet. “So it means the state instructed men to kill their wives?”

Another pro-government MP, Malahat Ibrahimgizi, warned not to “exaggerate femicides, as there is no such trend.” She told Toplum TV: “Some groups want to make an elephant out of a fly. But it hurts our country’s image.”

On social media many Azerbaijanis condemned the red-paint protest, some calling it "hooliganism.”

The backlash “is to be expected in a patriarchal society,” Nagi said, adding that there is “a cruel attitude [in society] and it is scary.”

“When a woman is killed, the first question they ask is what had she done to be killed,” she said.

Another activist, Aygul Jafarova, noted that “the government claims that it is dealing with gender-based violence, but the fact is that in the whole country there are only three shelters for women.”

The feminist movement is helping bring the issue to public attention, and and now it is up to the state to take “preventive measures,” she told Eurasianet.

The backlash also is a sign that society is being forced to confront the problem in a new way, argued sociologist and feminist activist Sanubar Heydarova.

“Because they know that such things [domestic violence] were always there, but they never have been spoken about this much before,” Heydarova told Eurasianet. “The discussion around it also means something should change, we should deal with it in a new way. And people don’t want that because it is difficult to adopt new habits and values.”