Angered at Arms Sales to Azerbaijan, Armenians Push Away from Russia’s Embrace 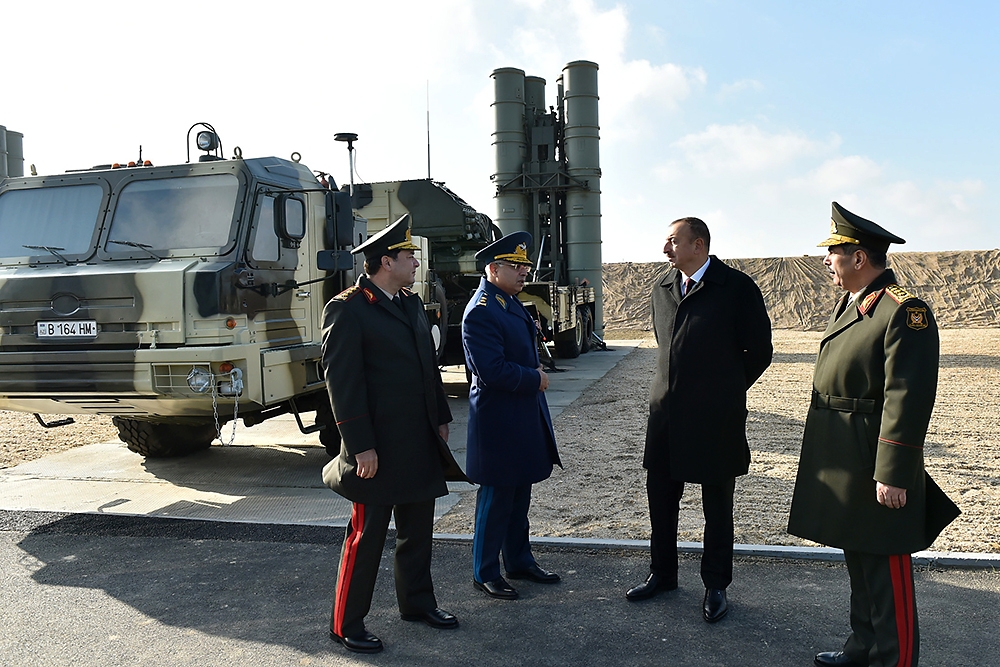 Azerbaijani President Ilham Aliyev (second from right) inspects Russian-made S-300 PMU-2 Favorit anti-aircraft missile systems at a military base in November 2015. Russia accounts for as much as 85 percent of Baku’s total military supply, angering many Armenians who have supported their country’s closer ties with Russia. (Photo: Azerbaijan Presidential Press Service)

When Armenia joined the Moscow-led Eurasian Economic Union in 2015, Armenian President Serzh Sargsyan justified the decision in part by asserting that membership would enhance Armenia’s national security. But, as the early April flare-up in fighting between Armenian and Azerbaijani forces over the Nagorno-Karabakh territory showed, such security benefits are more theoretical than real.

Armenia is ostensibly Russia’s closest strategic ally in the South Caucasus. Yet the intense fighting in Karabakh helped focus public attention on an issue that has rankled Armenians – Russian arms sales to Azerbaijan. Armenia officially lost 92 soldiers in the four days of fighting. The fact that Russian-supplied arms played a role in those deaths has become a source of bitterness for Armenians.

“It is naturally painful for us when Russia, and not only Russia, but other CSTO (Collective Security Treaty Organization) member states, sell arms to Azerbaijan,” Sargsyan said in early April while on a visit to Germany.

Yerevan long has known about Russia’s weapons sales to Azerbaijan – accounting for as much as 85 percent of Baku’s total supply, according to a 2015 report by the Stockholm International Peace Research Institute – and has complained accordingly.

But actually seeing them used against Armenian soldiers intensified a sense of injustice. Many previously had assumed the reported sales were a story crafted by pro-Western media outlets.

“When people saw that Russia sells weapons to our enemy, and our soldiers die from those same weapons, while, for some unknown reason, the delivery of our weapons [from Russia] is being delayed, many people started seeing things clearly,” commented 27-year-old painter Levon Arakelian, a resident of Gyumri, a northern Armenian town that hosts a Russian army base. “When you see the results [of Armenia’s alliance with Russia], … the friendly attitude turns into hatred.”

In Gyumri, opinions on Russia began to change last January, when Russian soldier Valery Permyakov confessed to having murdered a seven-member local family. His trial is ongoing. The death of seven Gyumri men during the April conflict with Azerbaijan has had a much stronger impact on views of Russia, claimed Arakelian.

In this, the Internet has played a central role. Russian TV channels and Armenian state-controlled stations do not broadcast anti-Moscow messages. But online media made it difficult for most Armenians to ignore the Russian arms sales, said 35-year-old environmentalist Armen Parsadanian, a resident of Kapan, a town about 320 kilometers south of the capital, Yerevan. “The Internet press has had a huge breakthrough with influence on public perceptions” of Russia, Parsadanian continued. “The image of a friend, of an ally, is broken.”

“It was difficult for a fan of Russia to hang on … and to justify Russian behavior in this situation,” he said of the reports about Russian arms sales to Azerbaijan. “Armenia is a very small country and it is very difficult to present events differently.”

In a 2015 poll published by the Gallup International Association Armenia, 59 percent of 1,105 surveyed Armenians identified Russia as the country Armenia should join if it ever decided to give up its independence. Twenty-eight percent of respondents objected to that prospect.

There is no public opinion data from the post-April conflict period to assess the extent of changing public attitudes toward Russia. At the same time, pollster Aharon Adibekian, the head of the Sociometer Sociological Center, noted that “the change of attitudes is noticeable not only among common citizens, but also among the country’s strategic decision-makers.”

The Kremlin long has held that its weapons sales to both Armenia and Azerbaijan help maintain a balance of power between the two foes. So far, Russian officials have made no effort to address Armenia’s anger directly.

Armenia has only a limited ability to prompt a shift in Russian arms sales, given the large role Russia plays in the Armenian economy. Aside from its base at Gyumri, Russia has a sizeable presence in the country’s mining, telecommunications and energy sectors. Remittances from Armenian labor migrants in Russia also are a critical pillar of the Armenian economy.

Not surprisingly, in areas like the southeastern region of Gegharkunik, where large numbers of working-age men head to Russia in search of work, the annoyance with Moscow is muted. Though the contraction of the Russian economy has led to fewer job opportunities for migrants, many Armenians, those living in areas that border Azerbaijan still view Russia as a protector.

“On the one hand, there is a lack of awareness [about Russian arms deals with Azerbaijan], and on the other – Russia, being the only way out, people try to justify Russian policy,” said Anahit Gevorgian, head of the Community Council of Martuni Women, a local non-governmental organization.

But many have given up counting on Russia. “The four-day war showed that our only security guarantee is us, the soldiers standing at the frontline, and that our hope should be only in us,” commented Gyumri resident Arakelian.

Marianna Grigoryan is a freelance reporter based in Armenia and editor of MediaLab.am.