Another comeback for Misha

The former president of Georgia makes a grand comeback to Ukraine and gets ready to dive back into politics. 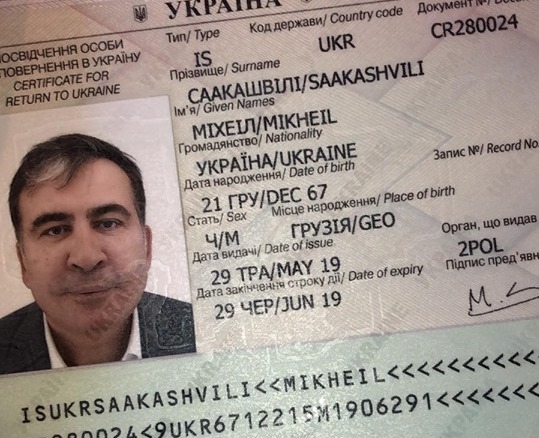 Mikheil Saakashvili's new travel documents on which he entered Ukraine on May 29. He had been stripped of his Ukrainian citizenship but newly inaugurated president Volodymyr Zelensky restored it. (photo: Facebook)

Naturalized, denaturalized and naturalized again: Former Georgian President Mikheil (Misha) Saakashvili has come back to Ukraine after a rollercoaster ride of gaining, losing and re-gaining Ukrainian citizenship. The nomadic politician and self-styled scourge of post-Soviet oligarchs and Russian imperialism indicated that he plans to insert himself back into Ukrainian politics, potentially as an adviser to new President Volodymyr Zelensky.

“See you in Kyiv,” said Mikheil Saakashvili in a video address on May 28, and the next day he landed in Kyiv’s airport to a Hollywood star-style welcome by his fans. He was met in Boryspil Airport with traditional Ukrainian song and dance, rolling TV cameras, and cheers of ‘Misha! Misha!” by a crowd of supporters.

Still, this homecoming was more prosaic than the previous one. Last time the kinetic politician came to Ukraine he, flanked by supporters, bulldozed his way through the Ukrainian border, overpowering the bewildered border guards. Then-President Petro Poroshenko had to send special forces to catch – not without some effort – his ally-turned-rival and evict him from the country.

Following his defeat to oligarch Bidzina Ivanishvili in Georgia in 2012, Saakashvili reinvented himself as a governor in Ukraine and an ally to Poroshenko, also an oligarch. Former Georgian President Giorgi Margvelashvili stripped Saakashvili of his Georgian citizenship in 2014, when Poroshenko gave him a Ukrainian passport. Poroshenko took back Saakashvili’s citizenship 2017, after the two had fallen out. Now Zelensky – inaugurated this month – has given Saakashvili back his Ukrainian citizenship.

Saakashvili now says he wants to fight the oligarchy and Russian meddling in Ukraine with the new Ukrainian leader. The two men could indeed hit it off: Both are committed to changing Ukraine and both are political showmen. In Zelensky’s case that is literal: he first became Ukraine’s president on a comedy TV series and only then in real life.

Saakashvili said that he will be happy to render advice to Zelensky upon request. “I will do my best to share my experience of both success and failures” in building democracy, Saakashvili said in a May 28 interview with Georgian television channel Rustavi 2. Zelensky might take him up on the offer. “I think he is a serious diplomat and a valuable consultant for any candidate for Ukraine’s presidency,” Zelensky said of Saakashvili back in March.

While gloating at his Ukrainian nemesis, Poroshenko, Saakashvili also wagged his finger at his Georgian nemesis, Ivanishvili. The Georgian billionaire will soon fall as Poroshenko did, Saakashvili predicted, and then he will be vindicated and restored as a citizen in Georgia, as has happened in Ukraine.

Back in Georgia, Ivanishvili’s loyalists did voice frustration with Zelenksy’s courting of Saakashvili. “Zelensky’s decision is disappointing, but, when you look at the big picture, relations between Ukraine and Georgia are of far bigger significance and scale than decisions on Saakashvili,” said Gia Volsky, vice speaker of parliament and a member of Ivanishvili’s Georgian Dream Party.

Saakashvili’s archnemesis, Russian President Vladimir Putin, took a perhaps surprising position on the citizenship issue of the man whom he famously vowed to hang by the private parts. “[I]t would be fair to restore the Ukrainian citizenship of a person who used to be a Georgian but now calls himself a Ukrainian, I mean Mikheil Saakashvili,” Putin said back in April. For all their feuding, perhaps Putin did miss Misha after all.