Another Personality Cult Blossoms in Turkmenistan 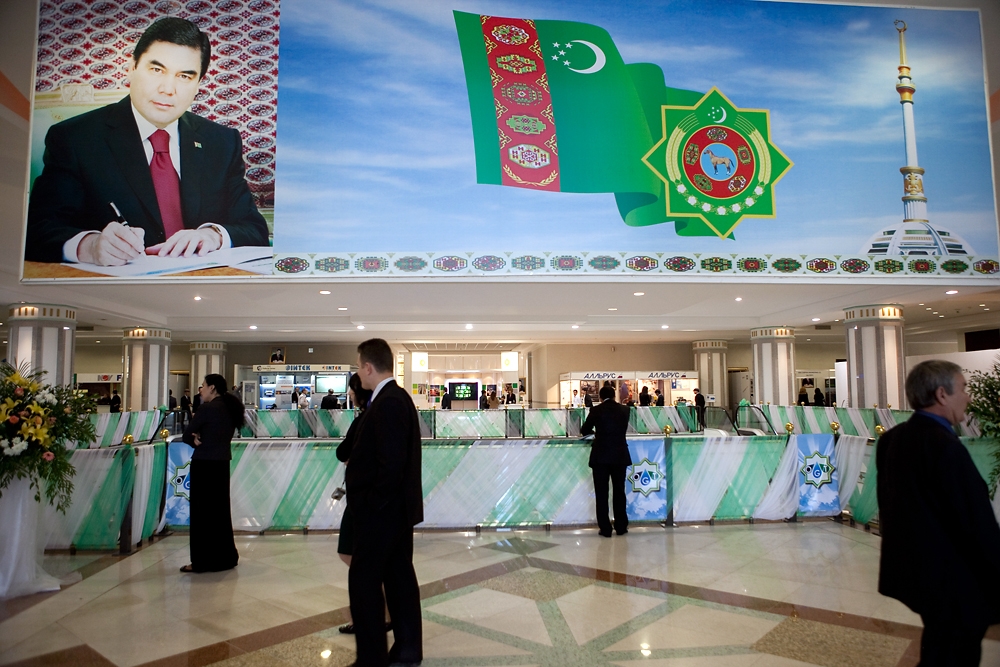 A poster of Berdymukhamedov greets visitors to the annual Oil and Gas Conference at Ashgabat's Sergi Kosgi Exhibition Centre. 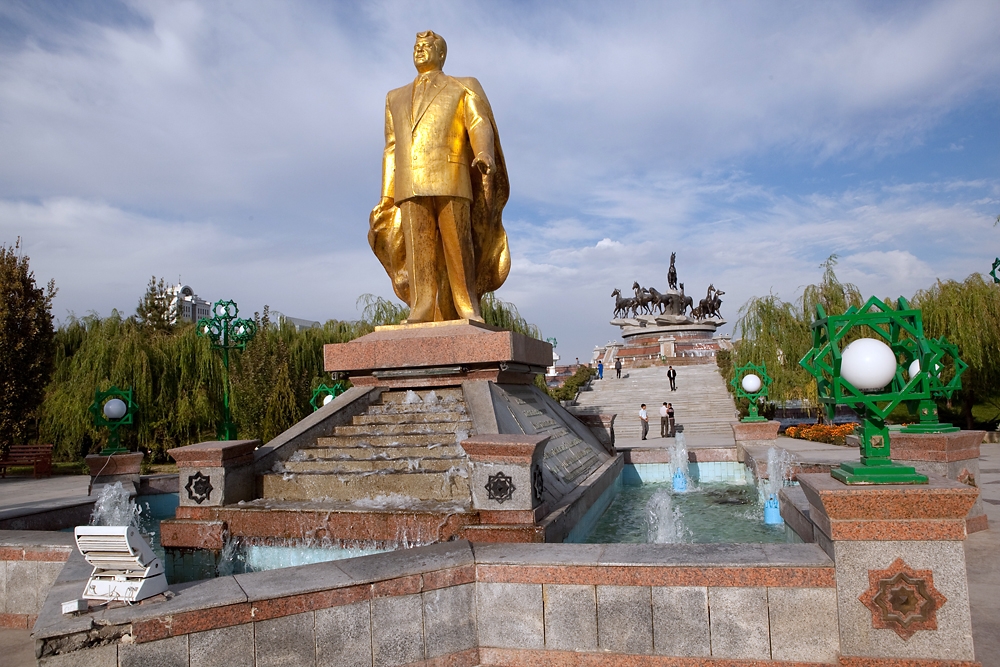 A statue of deceased President Saparmurat Niyazov -- a.k.a. Turkmenbashi -- in an Ashgabat park. 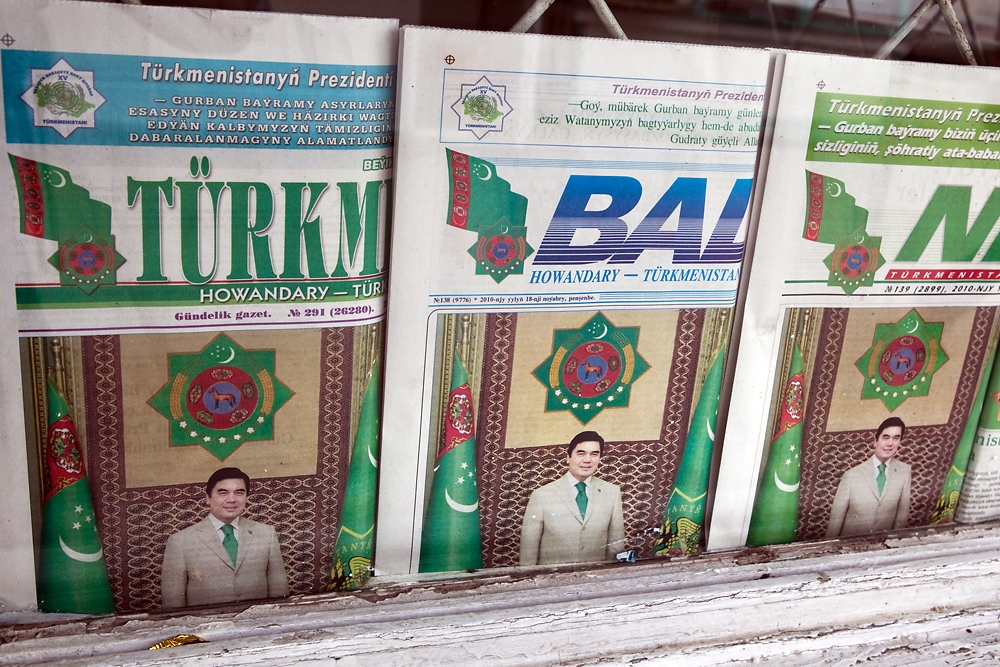 A newsstand in Turkmenbashi: Berdymukhamedov is on the front of every newspaper, every day. 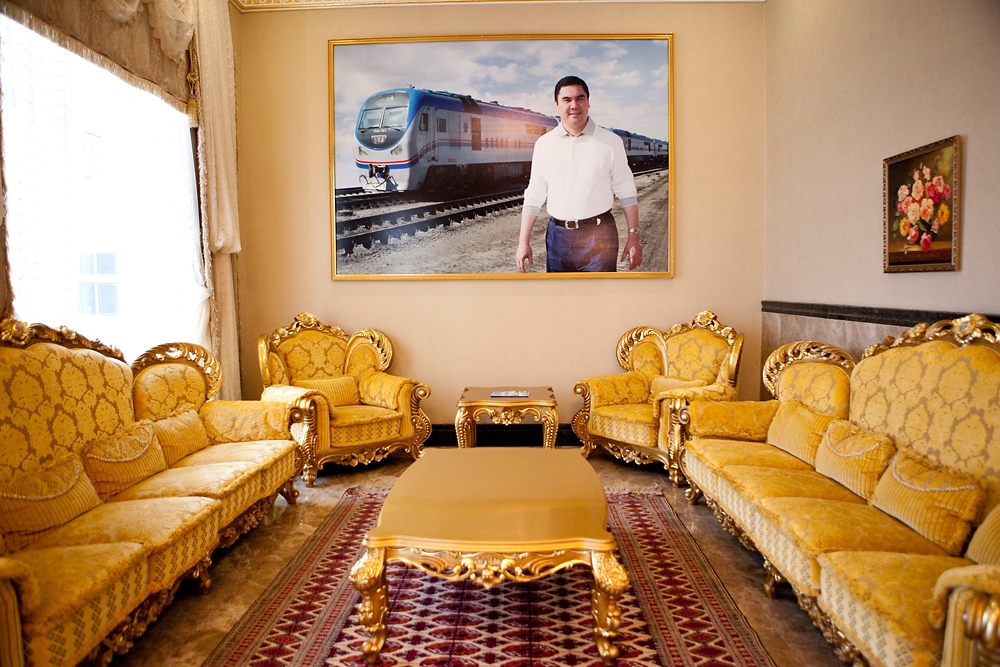 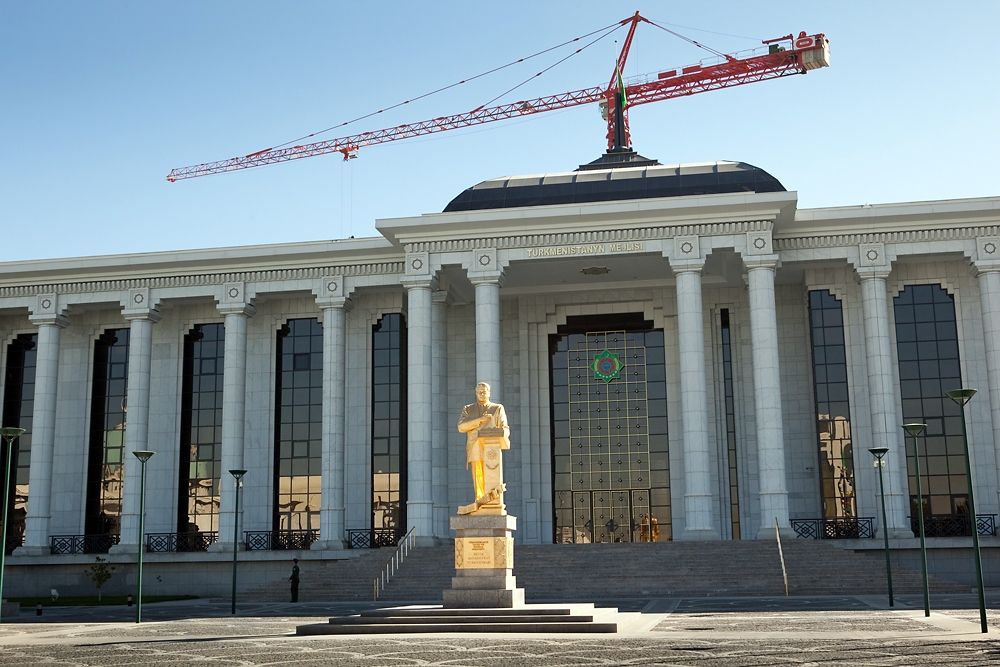 A golden statue of Niyazov stands before Turkmenistan's Supreme Assembly. 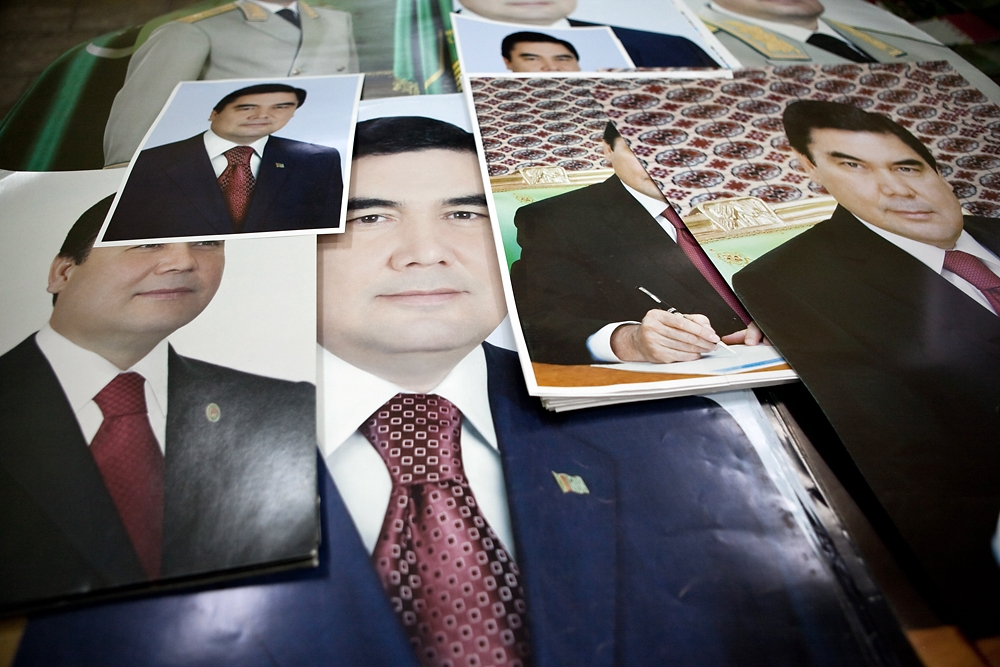 Posters featuring President Gurbanguly Berdymukhamedov are available at a bookshop in Ashgabat. 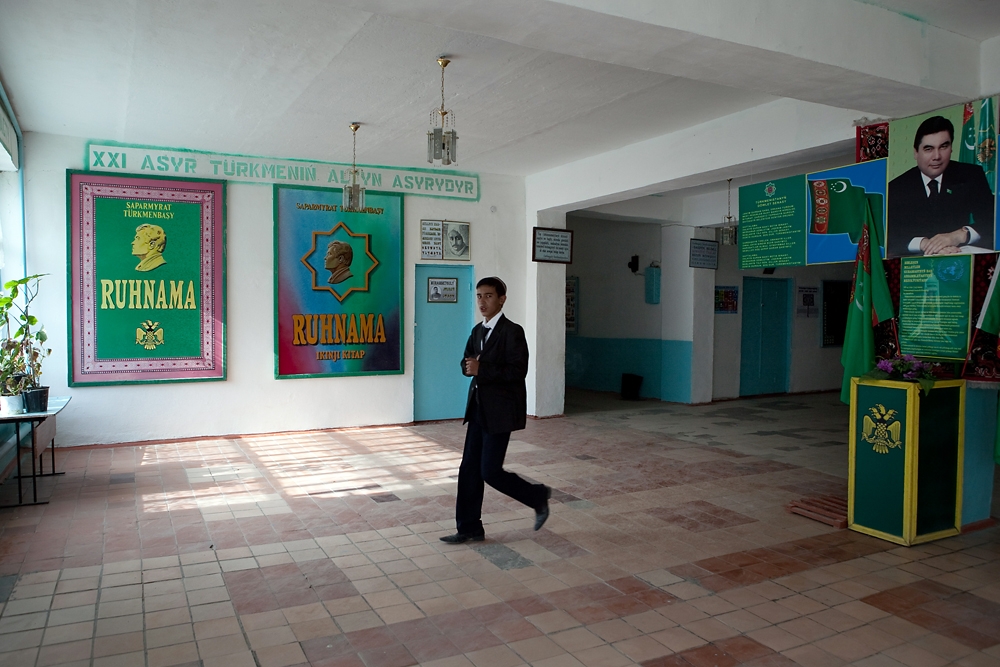 In the entrance to an elementary school in Nokhur it feels like Berdymukhamedov is competing with Turkmenbashi for most popular. 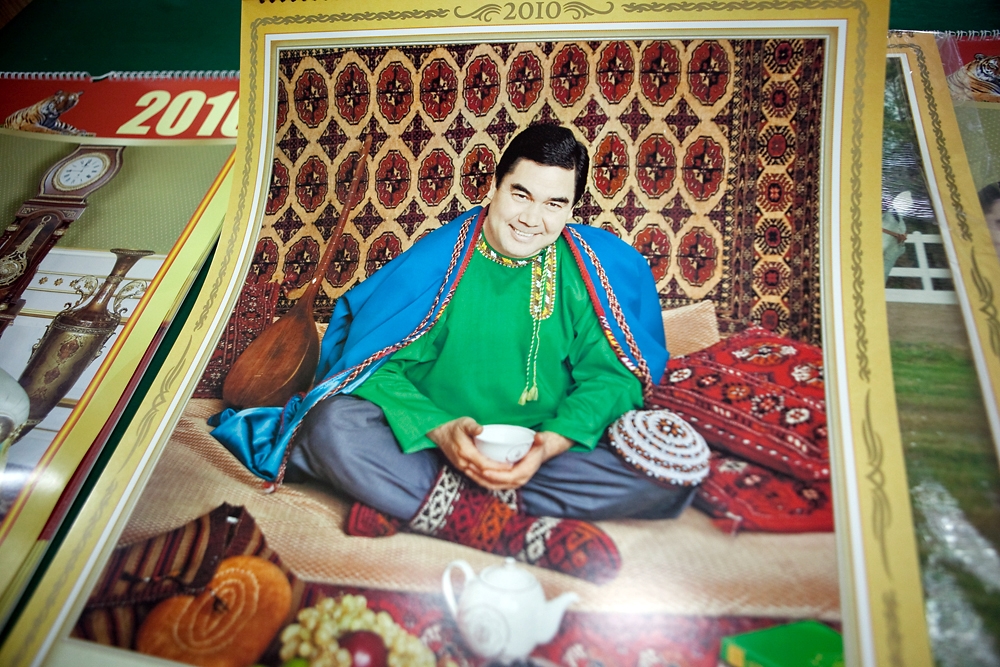 Calendars featuring Berdymukhamedov are available at a bookshop in Ashgabat. 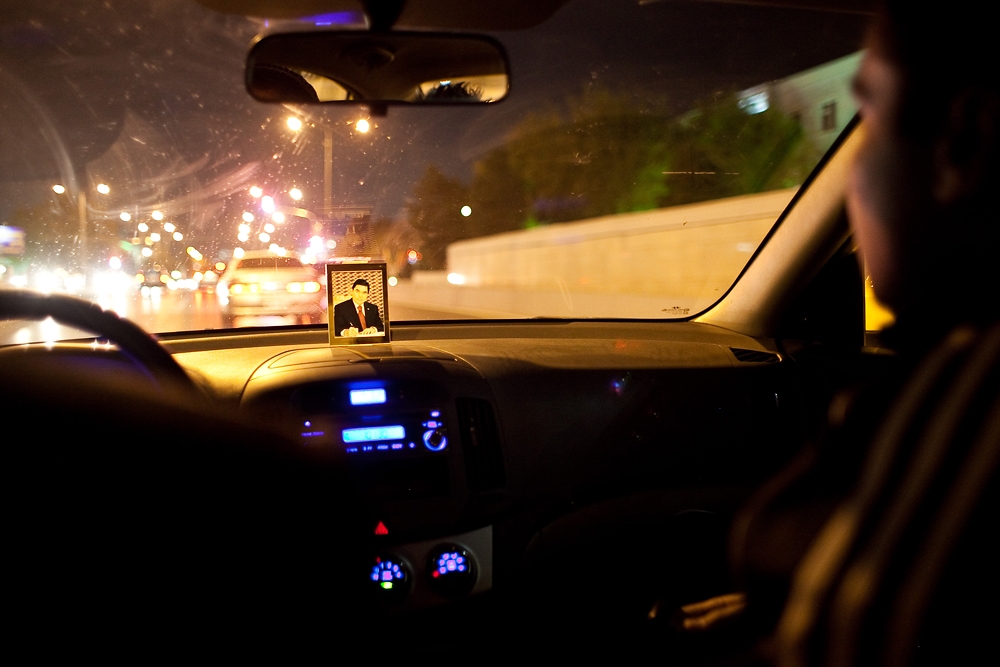 Small photos of Berdymukhamedov grace the dashboard of every official taxi.
prev
next

The golden one, Saparmurat Niyazov -- a.k.a Turkmenbashi -- built a notorious cult of personality, even penning his own “holy book.” Now, four years after the eccentric dictator’s death, his successor and former dentist, Gurbanguly Berdymukhamedov, is slowly eclipsing “the leader of the Turkmen.”

Every day, Berdymukhamedov smiles from the cover of every newspaper in the cloistered country, often from the same photograph. Words of his wisdom are boxed off as inspiration across the top.

Like a religious icon, at the head of each cabin on Turkmenistan Airlines and on the dashboard of all official taxis, Berdymukhamedov watches his flock, posing with pen in hand as if signing a check or ordering an arrest.

Whereas Niyazov placed golden statues of himself before buildings and in parks, since his death on December 21, 2006, obsequious Turkmen officials have not (at least not publicly) unveiled any statues of the new president, or affixed his face to bottles of vodka and cognac. But in the competitive culture of fear, where the two presidents even contend for space in elementary school foyers, many expect it is merely a matter of time.

Like Turkmenbashi, Micromanager-in-Chief Berdymukhamedov regularly scolds his doting lieutenants publicly. On November 22, for example, Turkmenistan’s state-run “Golden Age TV” announced a presidential order that the station’s director “be strongly reprimanded for the unsatisfactory fulfillment of official duties.” There is only one interpretation of the command: Broadcast more images of the president. Daily, television already spends hours gleefully reporting on his nature walks, his passion for horses, and the dancing children that greet him everywhere he goes.

Three weeks later, Berdymukhamedov was named “Man of the Year."

American diplomats have apparently called him "vain, suspicious," and a "practiced liar,” yet to his credit, Berdymukhamedov has not made his musings required reading for the country’s children. Under the flamboyant Niyazov, education in Turkmenistan tumbled. Turkmenbashi banned graduate programs and shortened the number of years children attended school, preventing eligibility at foreign universities; he instituted mandatory classes on his spiritual guidebook, the Ruhnama.

Like his predecessor, Berdymukhamedov (rumored to be Turkmenbashi’s illegitimate son) is an accomplished author, filling shelves in Ashgabat’s only bookstore with his thoughts on horses and family. Books by and about Berdymukhamedov, including an encyclopedia of medicinal plants and a fulsome hardcover about his grandfather, have taken over the top shelf, relegating Niyazov's "holy" Ruhnama to dusty lower cabinets and storerooms.

Berdymukhamedov’s cult of personality, just like Niyazov’s, is reinforced with fear. Young police conscripts man every corner in the capital; phones are tapped; the government controls peoples’ well being by doling out jobs, fuel, healthcare.

The cult of personality “immobilizes the government,” one local healthcare worker lamented. The “system under one decision maker is paralyzed – ministers don’t know how to ask him anything and thus nothing gets done.” But when someone “knows how to approach the president with an idea and he approves, there is an immediate green light and anything can get accomplished.”

The moral: Approach him before he turns too golden.