The Pride event would be the first in the Caucasus but has become yet another target for Georgia’s social conservatives. 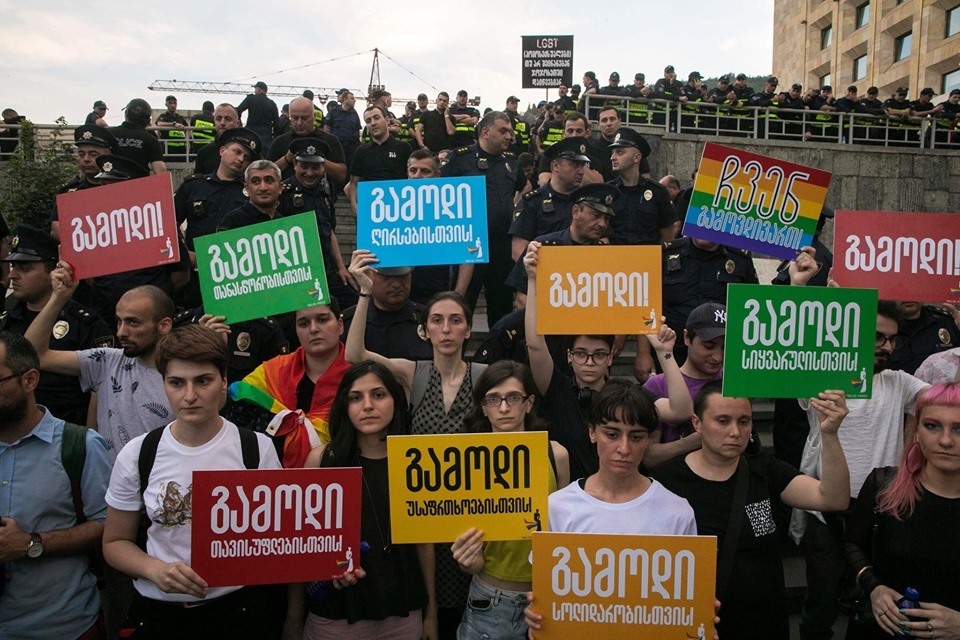 Supporters of a Pride event in Tbilisi demonstrate in front of the government administration building on June 14. (photo: TiflisPride Facebook page)

Vigilante groups have called on supporters to disrupt the first-ever LGBTQI pride event from taking place in Tbilisi, and police have said they can not guarantee the safety of its participants.

“We will organize ourselves into citizens’ brigades… and they will unite in a legion,” Levan Vasadze, a millionaire self-styled guardian of traditional values known for his anti-gay vitriol, told  a rally on June 16. “Among us are lots of people with military experience, famous athletes, rugby players, wrestlers…[I]f the propagandists of perversion attempt to hold some sort of demonstration, we will break through any police cordon.”

The threats cast doubt over plans to hold what would be the first LGBTQI Pride event in the Caucasus, planned as series of events between June 18 and 23 that will culminate in what the organizers call a “March of Dignity.”

Vashadze – often called a “knight” after having received the honor from Georgia’s royal family – also warned Western diplomats and activists not to get involved in the looming confrontation. “We’ve heard that planeloads of foreign sodomites are coming here,“ he said. “Even if the ambassadors from the whole world come whining to this government, we will not let them go ahead with this rally,” he said.

The organizers of Tbilisi Pride called on police to respond to the threats and provide safety guarantees for their events. “Tbilisi Pride calls on the Interior Ministry to immediately begin an investigation into the statement made by Levan Vasadze today,” Tbilisi Pride said in a statement.

“All elements of a crime are in evidence: a group is being set up to restrict a person’s right to move around freely… and restrict his/her freedom,” said Tbilisi Pride, adding that Vasadze’s call contained direct threat of violence.

The Interior Ministry said on June 17 that it had launched an investigation into formation of an illegal paramilitary formation. “I don’t know about that knight, but anyone who raises his hand against a police officer will face consequences,” Natia Mezvrishvili, the deputy minister of interior, told reporters.

Three days earlier, on June 14, thugs attacked LGBTQI rights activists who had gathered in front of the government administration building to demand protection against hate groups during pride week. Police struggled keep the attackers away and made several arrests. The detained assailants were released the following day and were ordered by court to pay fines.

If the vigilantes follow through on their threats it would not be the first time Tbilisi has seen such violence. In 2013, a mob led priests through a police cordon to attack a small LGBTQI rights demonstration in the center of the city.

“The way of life of LGBT individuals is sodomite sin and therefore goes against the Christian faith, traditional religious teachings, and moral values,” the patriarchate, the governing body of the Georgian Orthodox Church, said in a June 14 statement. The church distanced itself from any potential violence, but laid the blame for the potential violence on the pride organizers: “When a small group tries to push its point of view on the entire population, it naturally elicits a pushback.”

Following the June 14 attacks, LGBTQI activists and many opposition leaders criticized the government for failing to help citizens’ exercise their rights to freedom of expression. Earlier this month, the Interior Ministry said it could not guarantee safety of the pride participants in an outdoor event, instead offering some indoor alternatives.