The protests follow the death in custody of a young man, the latest in a series of scandals involving local law enforcement. 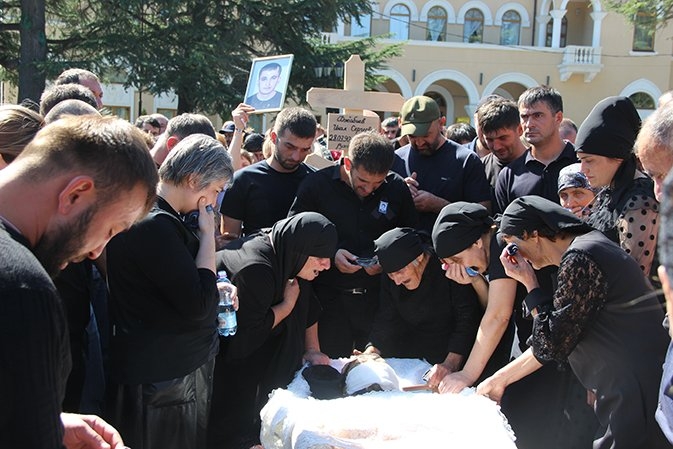 The funeral of a young man who died while in police custody in South Ossetia turned into a protest against the authorities in an escalating political crisis in the small, Russia-backed territory.

The funeral, on August 31, was the latest flashpoint in a political crisis that has gripped South Ossetia for the last several days. Inal Jabiyev, 28, died while in police custody and photos of his badly bruised body circulated through social media.

After a protest of about 300 people – the territory’s entire population is estimated at about 30,000 – de facto president Anatoliy Bibilov dismissed the government on August 28, but popular anger has not been assuaged and many have called for Bibilov himself to step down, as well.

At the funeral, about 2,000 gathered, a local correspondent from RFE/RL reported. Bibilov himself attended, but the other mourners “paid him little attention,” RFE/RL reported.

Some of the mourners then undertook a procession from Jabiyev’s home to the central square in the capital, Tskhinvali, where still more had gathered. The event turned into an anti-government protest, with signs and chants calling for Bibilov’s dismissal and several opposition politicians making speeches. A reporter for news site Caucasian Knot estimated the crowd at the protest at about 1,000.

Since Bibilov took power in 2017, there have been a number of scandals involving abuse of citizens by law enforcement, noted Olesya Vartanyan, a Tbilisi-based analyst for the International Crisis Group. “Will Bibilov survive this current standoff? Will see. No news about Russian envoys traveling to Tskhinvali yet,” Vartanyan tweeted.

Russia is South Ossetia’s main patron, providing it heavy financial and military support. It is one of the few countries that recognizes South Ossetia’s independence; most of the rest of the world considers the territory a breakaway part of Georgia.

Russia also is South Ossetia’s only outlet to the rest of the world, but the de facto border has been closed for five months as a result of the COVID-19 pandemic. That has caused tensions to fester throughout the summer, Russian newspaper Kommersant reported in a lengthy dispatch just before the protests began. Residents of South Ossetia have been unable to travel to Russia to collect their pensions, medicines have become unavailable and food prices have shot up as a result of the closure.

Former de facto president Eduard Kokoity has attempted to insert himself into the situation, with a video address calling on Bibilov to resign; the message appeared to be directed in part to Moscow. While Bibilov is pro-Russian, even calling for the territory to be annexed into Russia, his election in 2017 was a protest vote against the candidate that Moscow openly favored.

In January, protests in South Ossetia’s brother breakaway republic, Abkhazia, forced the resignation of that territory’s de facto president. In that case, Russian diplomats came to the territory to help broker a transition.

In an op-ed for JamNews, South Ossetian journalist Zarina Sanakoeva wrote that the root of the protests is Bibilov’s excessive consolidation of power around himself. “[T]he people are waiting not only for punishment, but for changes in the entire system,” she wrote.