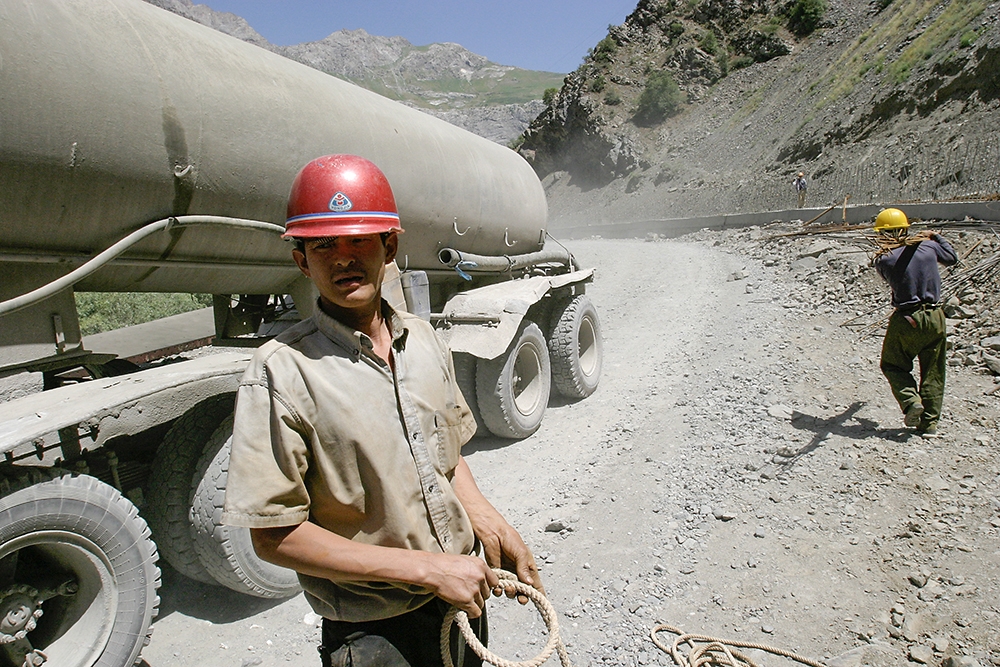 Stability in Tajikistan is attracting Chinese investment away from Kyrgyzstan. (Photo: David Trilling)

Central Asia’s two least-developed countries, Tajikistan and Kyrgyzstan, are both heavily dependent on Chinese investment these days. But now it appears Chinese investors are tiring of persistent uncertainty in Kyrgyzstan and are shunning the country in favor of neighboring Tajikistan.

Government officials in Tajikistan would have you believe that Central Asia’s poorest country is in the middle of an economic boom: the impoverished state broke its annual production record for cement and increased gold output by roughly 25 percent in 2014. But there’s a catch to the good economic news – Chinese companies were responsible for these achievements.

In Kyrgyzstan, Chinese businesses also act as an economic lifeline, since overall foreign direct investment (FDI) dropped by 35 percent in the first nine months of 2014 year-on-year, according to the Finance Ministry.

Neither Kyrgyzstan nor Tajikistan boasts an attractive investment climate. In the World Bank’s most recent Doing Business ratings, of the 189 countries surveyed, Kyrgyzstan placed 102nd for overall ease of doing business while Tajikistan ranked behind places like Iraq and Sudan at 166.

China’s Tajik projects have fared somewhat better than their Kyrgyz ones in recent years. For example, state-owned minerals giant Zijin Mining Group has gold concessions in both countries. Its 75-percent-owned Zarafshan concession in Tajikistan accounted for 70 percent of the country’s three tons of gold output last year.

The Chinese Embassy in Dushanbe did not respond to EurasiaNet.org’s request for details.

In Kyrgyzstan, meanwhile, the Taldy-Bulak Levoberezhny gold project, where Zijin holds a 60-percent interest, has been mired in problems since the Chinese bought into it in 2011. In 2012, Zijin had to evacuate roughly 250 employees following a brawl with locals; Kyrgyzstan’s deputy prime minister said this month that the project had not entered production on schedule due to electricity shortages.

“Unfortunately, whether due to conflicts with the local population or problems with licenses, very few projects reach the stage of completion in our country,” said Askar Sydykov, deputy director of the International Business Council, a lobby group in Bishkek. Compared to Tajikistan, with its authoritarian-minded system under President Emomali Rakhmon, Sydykov believes that some Chinese companies have found it harder to operate within Kyrgyzstan’s fractious semi-parliamentary political system, full of “different interests.”

“Some Chinese companies – the unethical ones – might look for political cover [for an investment] from a particular official. But in this system [in Kyrgyzstan], cover cannot be guaranteed,” Sydykov said.

Alex Melikishvili, a regional analyst with IHS in Washington, argues it is “premature” to say Chinese investors prefer Tajikistan. Beijing’s investments in Tajikistan are only just beginning to take off, he notes, while Chinese companies have invested more in Kyrgyzstan over a longer period of time. Nevertheless, Chinese companies have been more reluctant to expand in Kyrgyzstan recently. Melikishvili cites the Kyrgyz government’s failure last year to attract Chinese cash to build a major fertilizer plant in the south.

Chinese investors seem wary about Kyrgyzstan’s parliamentary elections this fall and “will be watching very closely how Kyrgyzstan’s Eurasian Economic Union membership might affect their business interests,” Melikishvili said, referring to the Moscow-led trade bloc Kyrgyzstan is scheduled to join in May.

Russia’s economic crash is heightening both countries’ need for foreign investment. With the Russian economy being dragged down by Western sanctions and the falling price of oil, millions of Kyrgyz and Tajik labor migrants in Russia are hurt by falling real wages. Remittances to Tajikistan, mostly from Russia, account for the equivalent of almost half of GDP.

“Tajikistan is starting to feel the pain of economic slowdown in Russia and [Dushanbe] is actively looking for foreign investments to compensate for the shortfall in remittances,” Melikishvili noted.

The problem for both Tajikistan and Kyrgyzstan is that while Russia wants to retain economic control over the both countries, it is in no position to invest. The Kremlin is unwilling to splurge on bilateral projects in such risk-laden places, says Nozim Ishankulov, director of the Dushanbe-based think-tank Tajikistan Free Market Center.

“In recent times, Russia has begun to make more and more demands in return for investment,” he told EurasiaNet.org. With the ruble plunging and Russia’s economy forecast to shrink dramatically in 2015, “Moscow has more important things to worry about than ensuring Tajikistan’s economic growth.”

At the same time, Russia is attempting to hinder further Chinese penetration into the Central Asian market. Many local analysts believe Russia takes a dim view of China’s growing business portfolio in an area it regards as its sphere of influence. Unabashedly pro-Russian regional media outlets, including Stan Radar, have heaped doubt on the benefits of Chinese investment in Kyrgyzstan and the region as a whole, while helping to stir up already prevalent fears of massive Chinese in-migration.

For the Tajik and Kyrgyz governments, Chinese investments are proving to be a double-edged sword. Although needed, heavy Chinese investment has broad implications for the economic and political sovereignty of both states.

Gains from Chinese FDI in Tajikistan and Kyrgyzstan have been be offset by ballooning sovereign debt, recent government figures show. Obligations to Chinese state banks accounted for 42 percent of Tajikistan’s approximately $2.1 billion external debt as of the end of last year. In Kyrgyzstan, outstanding loans from China total over $1 billion, almost a third of the country’s foreign dues.

In Tajikistan’s case, officials expect that proportion to increase sharply in the near future. Deputy Finance Minister Jamoliddin Nuraliev, who happens to be the president’s son-in-law, told the Financial Times in October that Chinese officials had promised his country $6 billion in investments (70 percent of GDP) over the next three years.