Are Outside Forces Conspiring To Create "Great Badakhshan"? 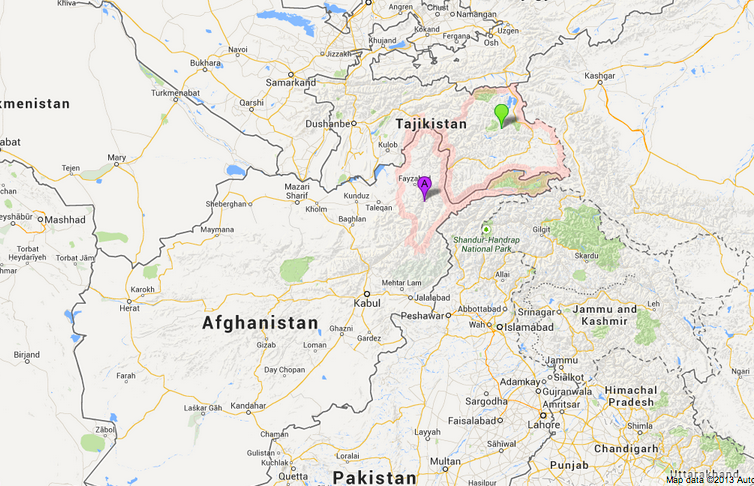 A leader of a governmental think tank in Tajikistan has accused "some countries" and "certain forces" of trying to create an independent Greater Badakhshan from parts of Tajikistan and Afghanistan -- but that Russia and China would help prevent that from happening. That's according to Asia Plus, which reported on a report that deputy director of the Center for Strategic Studies, Sayfullo Safarov, presented in Kazakhstan:

According to [Safarov], currently, there are groups in Afghan Badakhshan that are supported by certain forces. “This indicates that underground geopolitical games are being carried out,” [Safarov]said. He, however, did not specify what forces those groups submit to.

“We cannot say that these plans now pose serious threat to security of Tajikistan, because we are able to defend our part of Badakhshan. Besides, our strategic partners – Russia and China – will help us. However, some countries are hatching such plans we must be vigilant in order to keep stability in this region,” Safarov said.

In a response, also published on Asia Plus, Tajikistan political analyst Parviz Mullojonov noted that Safarov's comments dovetailed neatly with those of Russian government-affiliated "experts" who like to portray Central Asia as on the brink of chaos so as to justify an increasing role there. He said that the fallout from the controversial Khorog operation last year has forced the government into playing up the seriousness of the threat posed by Badakhshan:

Our official and semi-official political scientists had a hard time - they had to find an acceptable explanation of a military operation in Mountainous Badakhshon Autonomous Region to both Tajik and first of all, international public. International human rights organizations and diplomatic missions asked and have been asking a number of inappropriate questions. Such as for instance: why did they need to conduct a large-scale military operation in the densely populated regional centre and in a quite complex from military and geopolitical point of view border region because of the death of one obviously corrupt generals? Why did they need to involve the army in resolving issues, which are under direct jurisdiction of law-enforcement bodies and the State Committee on National Security? Why the army is dealing with internal political and practically criminal problems in a stable country? To all appearances, they were not able to give answers. This is why our spin doctors, who read a lot of Russian newspapers, raised an old motto from the times of the civil war about a threat of regionalism and separatism.

(Note: the above is from BBC Monitoring; I couldn't find the original on the Asia Plus site.)

Mullojonov went on to say that the Tajikistan government was "sawing off the branch it's sitting on" by making itself look vulnerable and weak in international fora.

Anyway, one wonders what "forces" and "countries" Safarov is implying are behind this separatist movement. The Aga Khan is probably one of them; many in Dushanbe seem to believe that the Aga Khan (the London-based spiritual leader of Ismaili Muslims, including the people of Badakhshan) harbors some secret political ambition, and his foundation has been very involved in both Tajik and Afghan Badakhshan.

On a recent visit to Badakhshan, I heard separatist sentiments firsthand, and was also told by foreigners who study the region that such ideas have gained popularity, especially in the last year. But 1. those sentiments are still extremely inchoate and not very widely held and 2. more importantly, they appear to be emerging from Badakhshan itself, not as the result of shadowy manipulations by outside forces.

UPDATE: A reader writes in to note that this conspiracy theory has been mooted before in Afghanistan. This is from 2012:

According to the current leader of Afghanistan’s National Congress Party Abdul Latif Pedram, the US and Britain aim to combine Pakistan’s Gilgit and Chitral regions, parts of the historical Badakhshan region in Afghanistan and Tajikistan, and a section of China’s territory to form a new country.

Several members of Afghanistan’s parliament have noted that the US and UK have been trying to establish a new independent nation in the mountainous region of the northeastern Afghanistan and its adjacent parts in Tajikistan.

Afghan MP Fouzia Kofi says subsequent to recent unrest in the Badakhshan provinces of Afghanistan and Tajikistan, certain domestic and foreign political circles are trying to prevent reconstruction of the historical Silk Road which can be the biggest economic highway for Afghanistan.