Pashinyan called the appeal a “coup attempt” and rallied his supporters at a demonstration in Yerevan’s center. 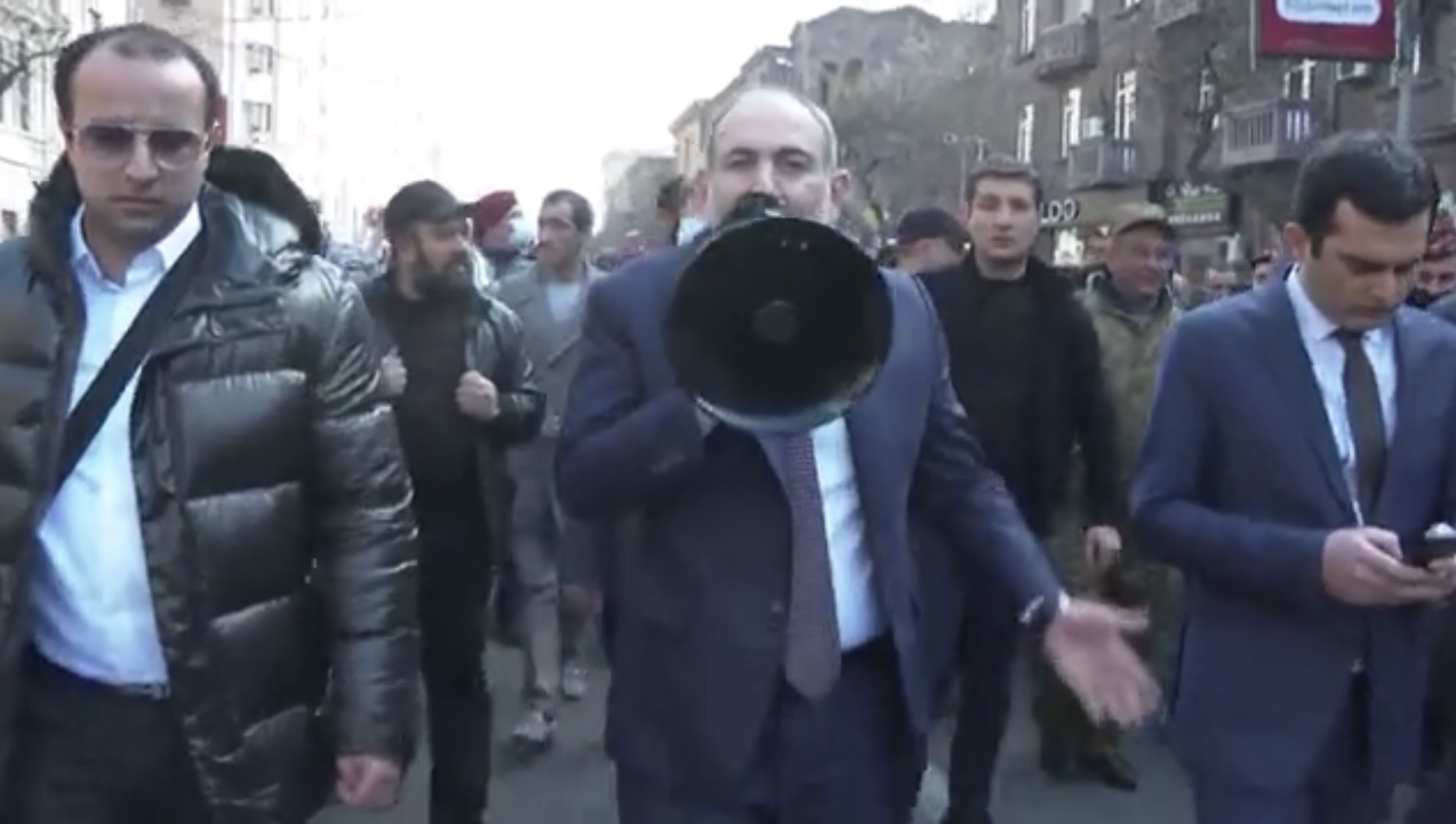 Armenian Prime Minister Nikol Pashinyan rallies supporters following a call by the leadership of the armed forces for him to step down. (photo: Facebook live stream, Nikol Pashinyan)

The leadership of Armenia’s armed forces has called for the resignation of Prime Minister Nikol Pashinyan and his government in the biggest challenge yet to the prime minister, who has been barely hanging on to power following the country’s catastrophic loss in a war with Azerbaijan last year.

Defense Ministry spokesman Samvel Asatryan posted the appeal on his Facebook page the morning of February 25. The extraordinary statement, signed by dozens of senior officers, criticized the firing of the deputy chief of staff of the armed forces the day before. The official had mocked Pashinyan in an interview.

“Due to the current situation, the armed forces of the Republic of Armenia demand the resignation of the prime minister and government of the Republic of Armenia, at the same time warning against the use of force against the people who died defending the homeland and Artsakh,” the officers said, referring to the Armenian word for Nagorno-Karabakh, the territory at the heart of the conflict with Azerbaijan. “The army has always been with the people and the people with the army.”

Pashinyan responded in his own Facebook message calling the statement a “coup attempt.”

“If we want to find out the truth about the war we can’t not ask questions of our senior army officers, but some of our beloved and respected generals do not like that we and the public could have some questions,” Pashinyan said. He called his supporters to a demonstration at Yerevan’s central Republic Square.

That square was the center of the massive demonstrations of the “Velvet Revolution” that Pashinyan rode to power three years ago, and the prime minister appeared to be trying to recapture some of the glory of those days in this, his first public rally since the loss of the war.

Amid a heavy police presence, thousands gathered in the late afternoon to hear Pashinyan speak. They chanted “Nikol, prime minister” – a rebuke to the chant “Nikol, traitor” that has become the trademark of the opposition.

“The ‘velvet’ is over,” Pashinyan told the crowd, suggesting that he intended to take a harder approach to his opponents. “Do you want snap elections?” he asked the crowd – the main demand of the opposition. “No, we chose you,” supporters shouted back.

Pashinyan said he had tried to fire Onik Gasparyan, the chief of staff of the armed forces, who was among the signatories of the resignation appeal, but that the legal authority to do so remained with President Armen Sarkissian, whose job is largely ceremonial. “If the president doesn’t sign it [the order to dismiss Gasparyan], what does it mean? Is he joining the coup? It’s a very simple choice,” Pashinyan said. “Forget about the president, jail them all,” one older woman in the crowd shouted in response.

One supporter, 20-something Sargis Khachatryan, said he came out because he didn’t want the opposition, made up of many figures from the old regime, to gain power. “The former authorities aren’t letting this country get on its feet, they are sabotaging the government,” he told Eurasianet. He said the opposition lacked the real popular support to justify their demands that Pashinyan step down. “The only way he goes is going to be through a coup,” he said.

About a week earlier, that opposition had renewed its regular protests against Pashinyan and his government. “We have to give Pashinyan’s members of parliament a way out,” said Vazgen Manukyan, the opposition alliance’s candidate for prime minister, in one such protest on February 20. That was the opposition’s “Plan A,” he said. “Plan B” was: “You have to be ready to take power at any moment by rebellion with a lightning speed.”

That opposition also gathered just an hour before Pashinyan’s rally, about a kilometer away at Liberty Square, to support the officers’ appeal. The proximity of the two feuding camps led to some scuffles, local media reported.

The crowd there was somewhat smaller than at Pashinyan’s, though it was bolstered by supporters of former president Robert Kocharyan, who had so far not formally supported the opposition coalition but earlier in the day had called his followers into the streets.

“Our state is in the hands of a madman,” said one of the speakers, Ishkhan Saghatelyan of the Armenian Revolutionary Federation – Dashnaktsutyun. While one opposition chant had been “Armenia without Nikol,” Saghatelyan said: “we’re changing the chant to ‘Armenia without a Turk.” Many in the crowd responded: “He is a Turk, he is a Turk.”

Another new figure at the rally was Yuri Khatchaturov, a former senior military official and also head of the Collective Security Treaty Organization, a Russia-led defense bloc of which Armenia is also a member. “Dear friends, I didn’t come to these rallies before because I was uneasy about our army’s passivity,” he told the crowd. “But today they finally woke up and made a decision and I am very happy.”

While the Pashinyan supporters dispersed after his event, the opposition rally continued into the evening. Some opposition supporters also set up tents outside the parliament building.

Pashinyan himself may have accelerated the “rebellion” that Manukyan had warned about with some intemperate remarks about Russian weaponry. In an interview earlier in the week, Pashinyan had criticized the state-of-the-art Russian Iskander missiles in Armenia’s armory, claiming that they didn’t perform well. It ruffled feathers in Russia, which has since the end of the war become an even more critical security guarantor, deploying 2,000 peacekeepers to protect the remaining Armenian-controlled territory in Nagorno-Karabakh. And it added to a perception that Pashinyan was out of his depth in dealing with Armenia’s post-war crisis. “Such a public stab in the back of Russia, when Armenia’s security completely depends on Russia, is baffling,” wrote analyst Hrant Mikaelian.

The reaction from Armenia’s own armed forces also was swift. The deputy chief of staff, Tiran Khachatryan, was asked in a February 24 interview about Pashinyan’s comments, and began his response by laughing. They were “a superficial assessment” and “not serious,” he said. He was fired later the same day, setting in motion his fellow officers’ opposition.

"Serious mistakes in foreign policy have brought the country to the brink of collapse,” the officers said in their statement. The military had “patiently tolerated the incumbent authorities for a long time when they were attacking armed forces, attempting to discredit them” but that “everything has its limits.”

Russia itself replied with a hands-off approach. The Russian Foreign Ministry issued a statement seeing that it saw the events as “Armenia’s internal affair” and that “we are counting on its peaceful resolution.”

At least in the very short term, Pashinyan appeared set to survive a while longer. “I don’t think anything will happen today or tomorrow,” Mikalian told Eurasianet following the two rallies. “This is going to be a long-term struggle.”

This story has been updated with new developments in Yerevan late on February 25. Joshua Kucera contributed reporting.