Pashinyan: “The poverty is in our minds.” 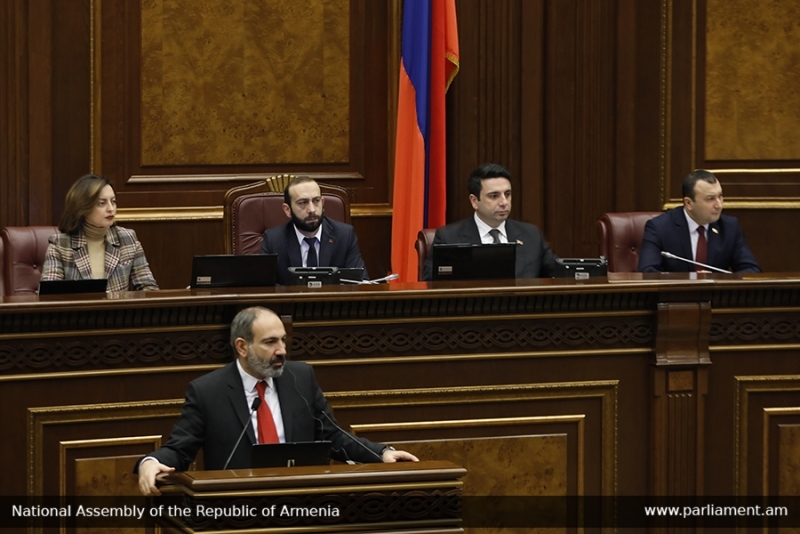 The Armenian parliament has adopted a five-year plan that the government proposed to fix Armenia’s economy, the country’s most pressing problem. But the plan was subject to broad criticism and passed without support of the two opposition parties in parliament.

“The economic revolution has begun,” said Prime Minister Nikol Pashinyan, presenting the program in parliament on February 12. “I am announcing the start of the nationwide economic revolution in the Republic of Armenia. The Armenian people won in the fight against corruption, impunity and clan management, and the Armenian people will win in the fight against poverty and unemployment.”

The 62-page government plan promises a “significant decrease” of the severe poverty in Armenia and a “significant decrease in unemployment by 2023.” Very small businesses would be exempt from taxes; public sector salaries would be increased. The plan gave a few specific targets: that GDP would increase by five percent a year, exports would be increased to over 40 percent of GDP by 2024, and solar energy would make up 10 percent of the country’s total consumption by 2022.

Many, though, criticized the plan for being generous with words but stingy with details.

Others criticized the plan for being insufficiently ambitious. “This plan is not revolutionary,” Gagik Tsarukyan, the head of the Prosperous Armenia party, told journalists. “If it doesn’t change, we can’t vote for it.” He allowed, though, that: “I don’t deny that there are two or three provisions which will create positive changes in people’s lives.”

MPs from the ruling “My Step” alliance defended the lack of specificity and modesty. Babken Tunyan, chairman of the parliament’s Economic Affairs Committee, said that the government could have picked a higher target than five percent GDP growth. "On the other hand, it is better to target less, but to achieve more,” he said.

Pashinyan’s emphasis on people’s responsibility for fixing the economy, including a statement that “poverty is in people’s minds,” raised some hackles.

Edmon Marukyan, the head of Bright Armenia said that was a means of dodging responsibility. “In the 90s, when I was a child, the only one responsible for our poverty was [the country’s first post-Soviet president] Levon Ter-Petrosyan,” Marukyan said during a February 14 session debating the plan. “Then, when we lived in poverty again, it was [second president] Robert Kocharyan. In 2018, of course, it was Serzh Sargsyan. And now a revolution occurs, and the leader declares that poverty is in people’s minds. Remove it from your minds and the economy will grow. Great, but then it’s not clear why the three previous leaders were responsible for our poverty, if the fourth one isn’t.”

On February 14, the plan was adopted with an 82-37 vote. While it wasn’t disclosed how individual MPs voted, the numbers suggest that all or nearly all My Step MPs voted for the plan, while the opposition parties didn’t.