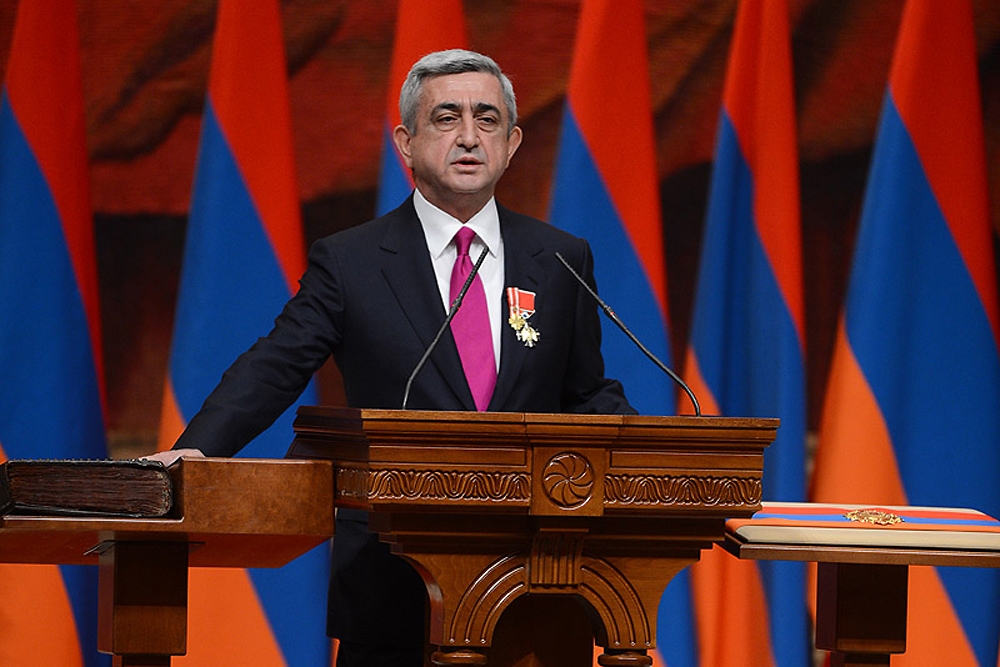 Re-elected as president of Armenia, Serzh Sarsyan is sworn in for another five-year term. (Photo: Armenia Presidential Press Service)

While Serzh Sargsyan took the presidential oath on April 9 to begin another term as Armenia’s president, his main challenger, Raffi Hovhannisian, vowed to keep pressing for change. But many members of the opposition rank-and-file are questioning whether Hovhannisian is the right person to lead the next charge.

Sargsyan’s inauguration took place at the Karen Demirchyan Sports and Concerts Complex in the Armenian capital Yerevan. Heavily armed police units ringed the complex, a reflection of the contested nature of the February election results. Before thousands of attendees, and placing his hand on a 7th century bible, Sargsyan promised to promote and protect a “secure Armenia.” Karekin II, the Catolicos of the Armenian Apostolic Church, also blessed Sargsyan’s presidency.

Hovhannisian, along with his supporters, contend that pro-Sargyan elements stole the presidential election. To show that they consider Sargsyan’s second term to be illegitimate, tens of thousands of Armenians gathered at Liberty Square in Yerevan to stage what an “alternative” inauguration for Hovhannisian. “Perhaps Armenia is secure for Serzh Sargsyan and his allies, but our Armenia is in a terrible state. People just leave the country every day and we have come here to stand up for our votes and our country,” an opposition activist from the town of Vanadzor told EurasiaNet.org at Liberty Square.

After Hovannisian took his own presidential oath, complete with his hand on a copy of the Armenian constitution, he stated that he would keep working to return power to the people. But he left many attendees disappointed by not outlining next steps in the political struggle against Sargsyan’s administration.

“I charge Mr. Serzh Sargsyan and Catholicos to come to Liberty Square and beg pardon from the people,” Havannisian said.

A random sampling of opinion among those at Liberty Square suggests that opposition supporters are hungering for a positive vision for change. Since the disputed presidential elections, Hovhannisian has led the so-called Barevolution. But beyond deriding the validity of Sargsyan’s election, he has not offered a comprehensive political alternative to the status quo.

“We often don't understand what Raffi Hovhannisian wants, but people cannot rely on someone else. When I hear Raffi’s speeches, I realize that nothing will change in this country and tomorrow the emigration rates will increase again, since people just cannot place their hopes on anything or anybody,” an opposition supporter told EurasiaNet.org.

“I have relatives who travelled from Moscow and Los Angeles to take part in this rally, and now we are going to be disappointed, since we don’t see here the person who can lead the people and make a difference,” said another Sargsyan administration critic.
Armen Badalyan, a Yerevan political expert, said the next step for Hovhannisian’s Heritage Party ought to be gaining lots of seats in the Yerevan City Council during the upcoming elections in early May.

While opposition to Sargsyan may run deep in Yerevan, support for Hovhannisian could prove fleeting, suggested Manvel Yeghiazarian, a former commander during the military conflict in Nagorno-Karabakh and now a prominent Sargsyan critic. “We have survived the famine and fought throughout the hunger and epidemics in the 90s. We did so, because we knew we were building Armenia,” said Yeghiazarian. “But this vagueness is killing the people now. We need a bricklayer now, to put it crudely, while Raffi is a dyer. This does not mean we don't accept the dyer. He is building a house too. But today it is the imperative to have a bricklayer.”

After the Liberty Square festivities, Hovhannisian led opposition supporters on a march toward the presidential residence. Riot police blocked access to the residence, and, amid clashes, about 20 people were taken into custody. Later, Hovhannisian proceeded to the Tsitsernakaberd memorial, dedicated to victims of the 1915 Armenian Genocide. There, he prayed together with the chief of Armenian police, Vladimir Gasparian. “I pray for Serzh Sargsyan, for the Catholicos and for the police,” said Hovhannisian.