The court’s surprise decision to let Kocharyan go precipitated both a domestic and international crisis. 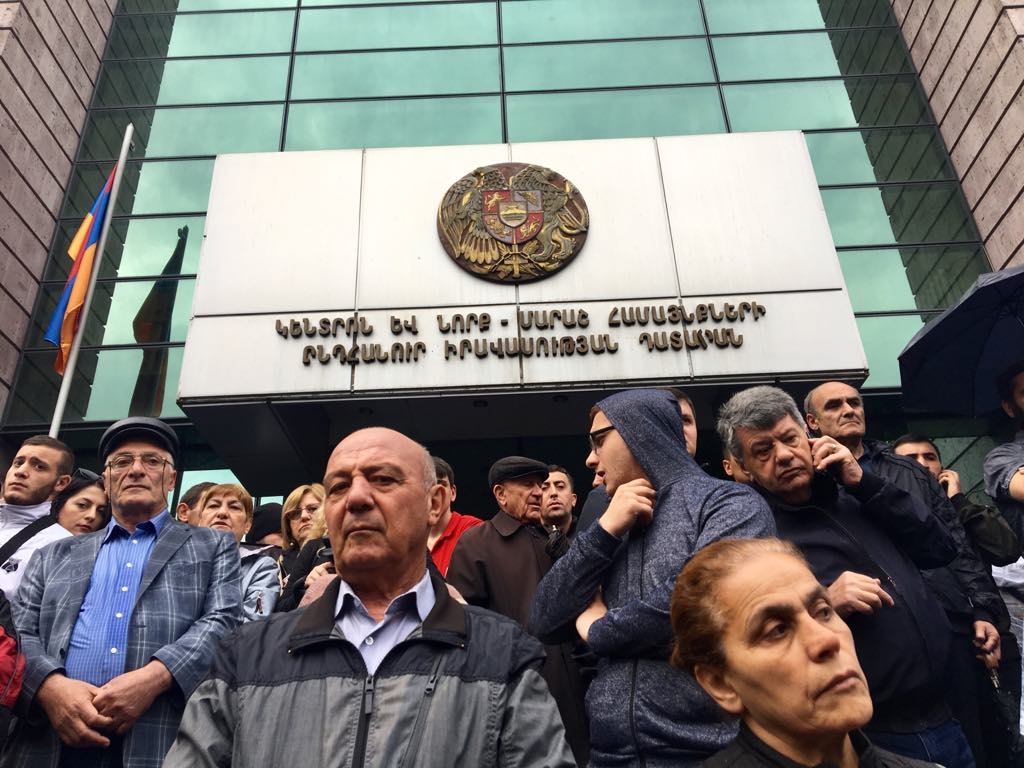 Protestors block the entrance to the Court of General Jurisdiction in Yerevan on May 20. Photo by Roubina Margossian for EVN Report (used with permission)

Following the surprise release of former Armenian president Robert Kocharyan from jail over the weekend, Prime Minister Nikol Pashinyan has accused both his country’s judicial system and the de facto leaders of Nagorno-Karabakh of conspiring against him and his government.

On May 18, a court ordered Kocharyan to be released. He had been on trial for charges related to the violent breakup of March 2008 protests against fraudulent elections. Kocharyan, also a former de facto president of Nagorno-Karabakh, was released to the personal guarantee of two other leaders of the territory – one former, another current.

In response, Pashinyan – who has placed a high priority on Kocharyan’s prosecution – called on his supporters to surround court buildings and block people from entering and exiting.

Pashinyan has long accused the judiciary of taking orders from the former government. But the fact that he took dramatic action immediately after a judge issued a verdict which he opposed led many to accuse the prime minister of inappropriately politicizing the judicial system. Kevork Oskanian, a political scientist at the University of Birmingham, said in a tweet that it was an “unacceptable affront to the independence of the judiciary.”

Armenia’s human rights ombudsman, Arman Tatoyan, issued a statement criticizing Pashinyan’s appeal. “There are problems in the court system, including its independence … but these problems must be solved using exclusively legal means,” Tatoyan said. “Therefore, the prime minister’s statement … is extremely dangerous for the security and stability of the country's legal system.”

On May 20, about 1,100 people heeded Pashinyan’s call at 11 court buildings around Yerevan, according to one count. At the Constitutional Court, about 150 people gathered. “It’s ridiculous that the executive is revolutionary while the judiciary remains controlled by the old regime,” one of them, Artur Petrosyan, told Eurasianet.

“The judicial branch will become legitimate,” said another supporter of the blockade, Henrik Sergoyan. “Pashinyan knows how to make the government and the judiciary free. He knows how to fight corruption. We trust him.”

Later in the day, Pashinyan elaborated on his appeal in a live, televised speech. “The Armenian people perceive the judiciary as a remnant of the former corrupt system, where conspiracies are constantly being designed and carried out against the people,” Pashinyan said. He also laid out a plan to reform the judiciary, including publicizing each “judge's political connections, family background, [and] property status” and asking those with connections to the former government to quit.

In perhaps an even more consequential move, Pashinyan also implicated the authorities of Nagorno-Karabakh in the conspiracy, accusing them of plotting to hand over some Armenian-controlled territory to Azerbaijan and place the blame on him. “I consider this to be treason against the state and as prime minister of Armenia, the guarantor of Artsakh’s security, and the supreme commander-in-chief of the armed forces, I will take the toughest measures to eradicate these conspiratorial intentions,” he said in the speech. (Artsakh is the Armenian name for Karabakh.)

He also said the parliament should set up an investigative commission to “study the circumstances around the April 2016 war [a brief flareup in fighting with Azerbaijan] and to get answers to a number of questions that are of concern to us all.” He did not elaborate on what the questions were.

Pashinyan has been facing opposition, occasionally public, from the authorities in Nagorno-Karabakh, who were closely allied to the former government in Armenia. Pashinyan visited Karabakh on May 9 and was asked about opposition to his government there. "If someone tries to make Karabakh a hotbed of counterrevolution, the people will make it a hotbed of revolution," he said.

One of the most prominent Pashinyan critics in Stepanakert has been Vitaliy Balasanyan, the secretary of Nagorno-Karabakh’s national security council. On May 19, police stopped Balasanyan’s car in Yerevan and demanded to search it for weapons, according to a Facebook live broadcast by Hrant Melik-Shahnazaryan, a hawkish Armenian analyst who was with Balasanyan. Balasanyan refused to allow the search without a warrant, and police later issued a statement saying that Balasanyan was not the target of the search.

“After the revolution in Armenia [in April 2018], there was an attempt in Karabakh [to follow suit] but the authorities [in Yerevan] – perhaps because of fear of war – held back,” said Petrosyan, the protester at the Constitutional Court. “As a result, in a year Nagorno-Karabakh has become the center of counter-revolution.”

The event that set off the crisis, Kocharyan’s release, followed a week-long court hearing that riveted Armenia. Kocharyan stood accused of “overthrowing the constitutional order” in connection with the 2008 events, in which eight protesters and two police officers were killed. The hearing, to determine where Kocharyan would be detained while he waited for his trial, began on May 13. During the course of the hearing Kocharyan also was accused of taking a $3 million bribe, which he denied. "This charge was invented to extend the detention as much as possible, there is no other explanation," he told the court.

Some of Pashinyan’s allies publicly called on the judge to deny Kocharyan bail. Hayk Sargsyan, a member of parliament from the ruling “My Step” alliance, wrote a Facebook post calling on people to go to the court and protest to “force the judge to make a fair decision,” prompting a protest from Kocharyan’s lawyers. (Sargsyan subsequently deleted the post.)

The current de facto leader of Nagorno-Karabakh, Bako Sahakyan, as well as a former leader, Arkadi Ghukasyan, personally appeared at the trial to guarantee Kocharyan’s bail at 500,000 drams (about $1,000) each. Each gave Kocharyan a warm hug in the courtroom, enraging his many detractors. As Sahakyan and Ghukasyan left the court, protesters shouted “Shame!” at them.

The trial did not get into the events of 2008, however. “There are no facts about people’s deaths, about Kocharyan’s participation in all of this, in general there is nothing,” wrote analyst Hrant Mikaelian. “Pashinyan’s supporters, especially from ‘civil society,’ are blaming it all on the judge and want to carry out a renovation of the justice system, but it is pure legal nihilism. In addition, in recent weeks hateful propaganda has been running at full steam, the government is mobilizing people to carry out supposedly spontaneous protests against Kocharyan’s release.”

“The danger in post-revolutionary Armenia was always that Pashinyan, lacking the ability to transform the country quickly or sustainably, would fall back on the populism that got him into power. Here we are,” tweeted Nate Schenkkan of U.S. human rights organization Freedom House.

With additional reporting by Peter Liakhov

Joshua Kucera is the Turkey/Caucasus editor at Eurasianet, and author of The Bug Pit. Ani Mejlumyan is a reporter based in Yerevan. Sign up for Eurasianet's free weekly newsletter.